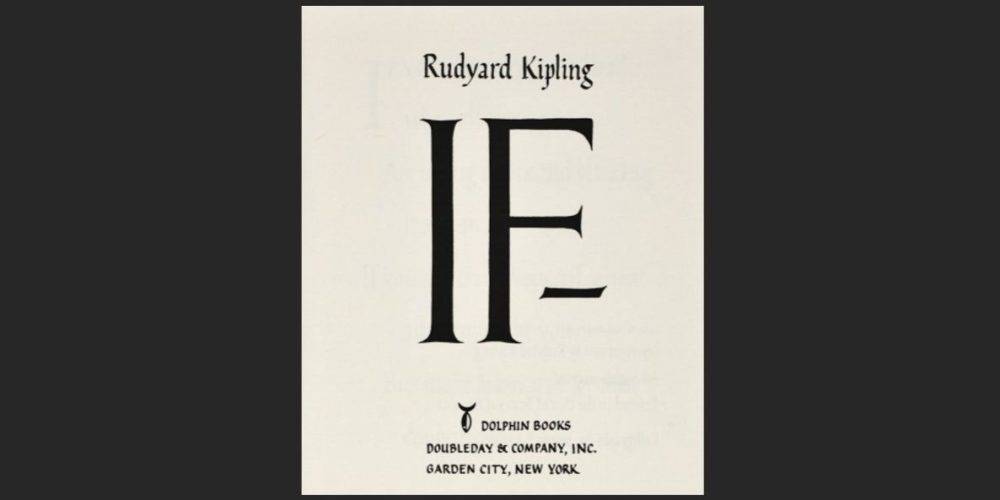 A Poem for Trying Times: Rudyard Kipling’s “If–”

Ayn Rand was a novelist and a connoisseur of fiction. By her own admission she was “not an admirer of poetry” and found it “impossible to discuss.”1 Even so, after saying this in a Q&A session, she went on to describe one of her favorite poems. By many accounts, it was probably her favorite poem:2 “If–” by the British author, Rudyard Kipling:

Since we are living through trying times ourselves right now, it is worth revisiting this poem. Here it is, in full:4

If you can keep your head when all about you
Are losing theirs and blaming it on you,
If you can trust yourself when all men doubt you,
But make allowance for their doubting too;
If you can wait and not be tired by waiting,
Or being lied about, don’t deal in lies,
Or being hated, don’t give way to hating,
And yet don’t look too good, nor talk too wise:

If you can dream—and not make dreams your master;
If you can think—and not make thoughts your aim;
If you can meet with Triumph and Disaster
And treat those two impostors just the same;
If you can bear to hear the truth you’ve spoken
Twisted by knaves to make a trap for fools,
Or watch the things you gave your life to, broken,
And stoop and build ’em up with worn-out tools:

If you can make one heap of all your winnings
And risk it on one turn of pitch-and-toss,
And lose, and start again at your beginnings
And never breathe a word about your loss;
If you can force your heart and nerve and sinew
To serve your turn long after they are gone,
And so hold on when there is nothing in you
Except the Will which says to them: ‘Hold on!’

If you can talk with crowds and keep your virtue,
Or walk with Kings—nor lose the common touch,
If neither foes nor loving friends can hurt you,
If all men count with you, but none too much;
If you can fill the unforgiving minute
With sixty seconds’ worth of distance run,
Yours is the Earth and everything that’s in it,
And—which is more—you’ll be a Man, my son!

In a 1962 column in the Los Angeles Times, Rand offered some insight into what the poem meant to her. Offering caution against misrepresentations of her philosophy, she noted an anecdote about how she has dealt with the more malicious smears in the past:

On a television interview, Mike Wallace once asked me what I thought of such tactics. I answered that I agree with a line of advice from Kipling’s poem “If”: “if you can bear to hear the truth you’ve spoken twisted by knaves to make a trap for fools . . . .” I can bear it. It is not fools that I seek to address.5

It’s worth pointing out that Rand probably would not have agreed with every line of the poem. While there are important elements of her philosophy that regard disaster as a kind of “impostor,” as metaphysically insignificant, she would not have said the same about triumph. By the same token, she would not have agreed with the idea that no other people should count too much in one’s life. While she insisted that one should not compromise one’s own beliefs and values for the sake of those of others, she still thought that the people one loves are crucial values in one’s life.

It’s precisely because Ayn Rand thought that crucial values matter in life that she was self-conscious about naming her favorite things in life, including her favorite poems. In times like these, it is especially important to identify our top values in life and fight to protect them. And if we should lose them, we should “stoop and build ’em up with worn-out tools.”