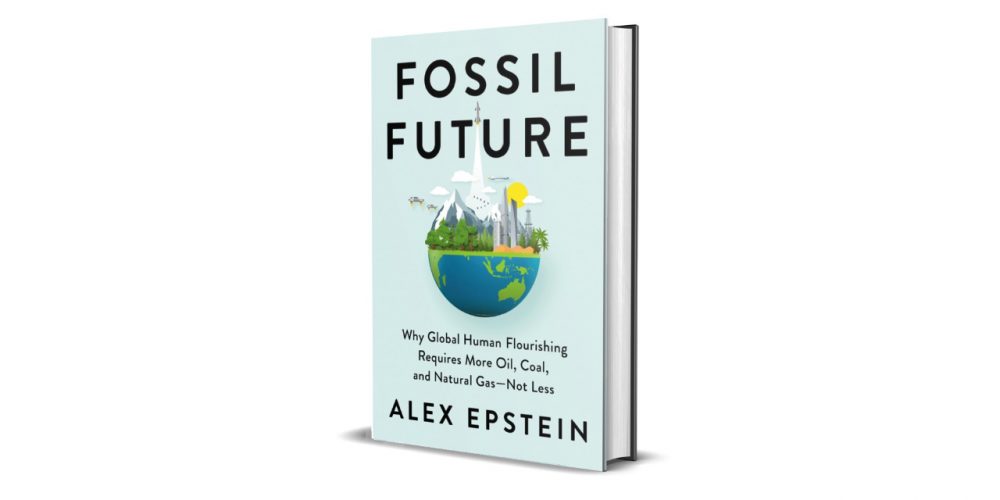 Why you should consider reading a book that defies orthodox opinions from trusted sources on the dangers of climate change.

Alex Epstein, author of the forthcoming book Fossil Future: Why Global Human Flourishing Requires More Oil, Coal, and Natural Gas — Not Less, has generously given New Ideal permission to share with our readers an excerpt from chapter 1 prior to the book’s May 24 publication. In this passage, Epstein challenges readers to keep an active mind as he presents a viewpoint that “totally contradicts what trusted source after trusted source tells us: that experts, especially climate scientists, have reached a near-unanimous consensus that fossil fuel use needs to be rapidly eliminated.”

I’m going to try to persuade you that if you want to make the world a better place, one of the best things you can do is fight for more fossil fuel use — more burning of oil, coal, and natural gas.

While we are almost universally told that more fossil fuel use will destroy the world, I am going to make the case that more fossil fuel use will actually make the world a far better place, a place where billions more people will have the opportunity to flourish, including: to pull themselves out of poverty, to have a chance to pursue their dreams, and — this will likely seem craziest of all — to experience higher environmental quality and less danger from climate.

I am not going to make the case for more fossil fuel use by making some “climate change denier” argument that fossil fuels’ CO2 emissions aren’t impacting climate; I totally acknowledge that they have contributed to the 1°C warming we’ve experienced over the last one-hundred-plus years, and they will contribute to further warming going forward. But I will argue that the negative climate impacts of fossil fuels will be far, far outweighed by the unique benefits of fossil fuels.

Fossil fuels, which provide 80 percent of the world’s energy, have and will continue to have the unique benefit of providing low-cost, reliable energy to billions of people in thousands of places — a benefit that is desperately needed in a world where some 3 billion people still use less electricity than a typical American refrigerator.1 Contrary to claims that solar and wind are rapidly replacing fossil fuels, fossil fuel use is still growing, while intermittent solar and wind energy, after generations on the market, provide just 3 percent of the world’s energy — and that 3 percent is totally dependent on fossil fuels, especially natural gas, for 24/7 backup. Solar and wind are nowhere near being able to replace the energy that fossil fuels provide today, let alone the far greater amounts of energy humanity needs going forward.2

One of the key benefits of more fossil fuel use, I will argue, will be powering our enormous and growing ability to master climate danger, whether natural or man-made — an ability that has made the average person on Earth 50 times less likely to die from a climate-related disaster than they were in the 1°C colder world of one hundred years ago.3

But is there really any chance that I’m right?

This argument we hear for this conclusion, which I call “the moral case for eliminating fossil fuels,” usually goes something like this:

Catastrophic climate change, along with other negative side-effects of fossil fuel use, such as air pollution and water pollution, make us morally obligated to rapidly eliminate fossil fuel use and reach “net-zero” CO2 emissions by 2050 at the latest — so as to limit warming to 1.5°C, or at the absolute most 2°C, over preindustrial, pre–fossil fuel temperatures.

What will replace fossil fuels? Green, renewable energy, solar and wind energy especially, which are already rapidly replacing fossil fuels at lower cost, and, with sufficient political will, can soon power the world.

The only people who oppose the rapid elimination of fossil fuels and its replacement by green energy are “deniers and delayers”— above all, the fossil fuel industry — who are placing their short-term convenience and profits above people and the planet.

This “moral case for eliminating fossil fuels” is not portrayed as one competing view among many. It is portrayed as the near-unanimous consensus of experts by a wide variety of trusted sources, including:

When so many trusted sources are telling us there is an expert consensus for fossil fuel elimination, it may be hard to imagine the moral case for eliminating fossil fuels isn’t at least basically right. Sure, maybe people don’t know the exact-amount magnitude of climate catastrophe that we face, or exactly the best way to replace fossil fuels with renewables, but there’s no way the “experts” could be totally wrong, as this Alex Epstein guy is arguing. So it may feel safe to oppose fossil fuels, and certainly there’s no need to go out on a limb and fight against fossil fuel elimination.

However, there are two factors that I urge you to consider before putting down this book.

The first factor is that, although we should certainly take it seriously when so many trusted sources tell us that something is the expert view, we know that throughout history what the general public is told the “experts” think has sometimes proved to be very wrong. In fact, some of history’s greatest evils — racism, slavery, eugenics — have been justified as supported by “the experts.”

The second factor is that the allegedly expert policy of rapidly eliminating fossil fuel use involves an incredibly radical and potentially disastrous change in how we use energy. We are being told that we must do away with fossil fuels, the source of 80 percent of the world’s energy, in a world where billions of people desperately lack energy. And we are being told that intermittent solar and wind, which provide just 3 percent of the world’s energy after many decades on the market, and which today depend on fossil fuels for 24/7 backup, will definitely be able to replace the 80 percent of energy we get from fossil fuels plus provide most of the additional energy the world needs — in less than 30 years.

If these radical changes do not work out, billions of people will have no chance at having affordable, reliable energy.

Population estimates for the 1920s come from the Maddison Database 2010 at the Groningen Growth and Development Centre, Faculty of Economics and Business at University of Groningen (for years not shown, the population is assumed to have grown at a steady rate), rug.nl/ggdc/historicaldevelopment/maddison/releases/maddison-database-2010.

Alex Epstein, president and CEO of the Center for Industrial Progress and a former ARI fellow, is the author of The Moral Case for Fossil Fuels and, most recently, Fossil Future: Why Global Human Flourishing Requires More Oil, Coal, and Natural Gas — Not Less.