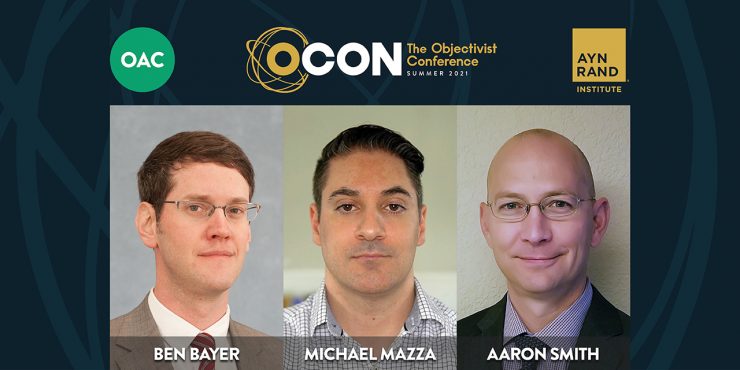 Even if you can’t make it to Texas for the live conference, this year marks the first time we’ll be livestreaming every talk at the conference. So by registering for a virtual pass, even if you’re on the other side of the planet, you’ll be able to take in a week of stimulating intellectual content from the comfort of your home — live or on-demand.

Among the speakers at the conference will be ARI scholars Ben Bayer, Mike Mazza and Aaron Smith, who are contributors to New Ideal and faculty members at the Institute’s Objectivist Academic Center. Here are brief Q&As with each one about their upcoming presentations.

That Radiant Selfishness of Soul: Understanding the Virtue of Pride (Saturday, August 28)

Objectivism regards pride as a crucial moral virtue. But what does it mean to act with pride, as opposed to feeling pride or achieving self-esteem? This talk will identify and elaborate on the central concern of the virtue of pride (the creation of one’s own character) and explore the chief practical requirements of the virtue, drawing on crucial examples from the plot of Atlas Shrugged.

New Ideal: Ayn Rand has a lot to say on the topic of moral virtue. Why single out this virtue for commentary?

Ben Bayer:  For one thing, it’s an exceptional virtue. John Galt calls it “the sum of all virtues.” Despite its importance, I don’t think many Objectivists understand it very well. Most everybody knows what the feeling of pride is, but that’s not the same thing as the virtue of pride, though I think they are related. I think I have some fresh takes on what it means to practice this virtue — or at least, fresh takes on how Atlas Shrugged has a lot more to say about it than just what’s in Galt’s speech. This talk grew out of work I’ve done for a chapter on Ayn Rand’s view of moral character in the upcoming volume of Ayn Rand Society Philosophical Studies.

NI: How does this topic connect to your other areas of interest in philosophy?

BB: Pride is the virtue that concerns how you should go about crafting your own soul. This is interesting to me because I’ve long been interested in free will and the Objectivist view that it’s our control over our thinking that makes us responsible for our actions and deserving of the rewards that follow from our achievements. Understanding why pride is a virtue helps us to understand the full sense in which we are beings of “self-made soul.”

NI: Your talk is also going to draw a lot on Atlas Shrugged. What can you tell Atlas fans about what to expect?

BB: There’s going to be a lot about Hank Rearden. When I did the Atlas Project with Greg Salmieri I spent a lot of time paying attention to the internal psychology of all the characters, and I was especially struck by how much Rearden develops, psychologically. Basically, Rearden’s story over the course of the novel illustrates much of why pride is so important, and what it means to exercise it.

“What For?”: How “Atlas Shrugged” Dramatizes the Struggle for the Value of Purpose (Sunday, August 29)

Ayn Rand named “purpose” as one of the three cardinal moral values of the Objectivist ethics. Drawing especially on Atlas Shrugged, this talk will illustrate what the value of purpose is, how it relates to the virtue of productiveness, and why it amounts to “that choice of the happiness which [one’s reason] must proceed to achieve.”

NI: What’s your purpose in giving a talk about the value of purpose?

BB: Like pride, I think the cardinal moral value of purpose is not well understood. The value of purpose isn’t identical with the ultimate purpose of ethics — one’s own life —  and it’s not even identical with the idea of one’s central purpose — productive work. At the same time it’s still closely related to both, and achieving it helps integrate both.

NI: Does this topic connect to the same set of philosophical interests you mentioned before?

BB: Yes, but there’s more to it than that. Pursuing and achieving the value of purpose is certainly crucial for crafting a soul that is truly yours. But in this case, I’m especially interested in the value of purpose for personal reasons. I’m someone who’s struggled for a long time to achieve it myself — and I think I’m still working on it. I think more people could stand to know what it means to pursue it.

NI: Atlas Shrugged again makes an appearance in this talk. This time what role does it play?

BB: It will play a major role. This talk will draw even more on the novel than the previous one. In a way the whole story of Dagny in Atlas is a story about her struggle to maintain this value, and this is often close to explicit. The obstacles she faces in this struggle relate to some of the central dilemmas she faces in the plot and hence are crucial to the major conflicts of the novel.

The dominant view of causality today is that it is a relation that holds between successive events. But that’s not Ayn Rand’s view. For her, causation is the relationship between the nature of an action and the acting entity. How do these views relate, and how can we decide which is correct? This talk answers these questions and explores some of the unique features of the Objectivist view of causality.

NI: What’s important to a general audience about a daunting-sounding topic like philosophical theories of causation? What’s your elevator pitch?

NI:You recently completed a PhD dissertation on the philosophy of science. How does your background in that field relate to your interest in this topic?

MM: I wrote a dissertation that developed a theory of causation in which entities are causes and used it to address some of the puzzles and problems of interest to contemporary philosophy. Entity-centric views of causation were once standard, but now they’re almost unheard of. In my talk, I address the way causation is and is not a temporal relationship. My perspective on this was in the background of my dissertation, though it didn’t make it to the final product.

NI: This is your first talk at OCON. What’s it been like to get ready?

MM: Exciting but stressful. Exciting because I have new things to say on this topic, and this is a significant opportunity to share them. Stressful because I’m still getting a handle on how to communicate complex philosophical material to non-specialists. What’s unique to the Objectivist view of causation vs. Humean views is the role time plays. That’s a technical issue, but it’s of immense importance to how we think about causality. The challenge is to present the technicalities in a motivating, intelligible, and valuable way to a general audience. As a result, my prep has been focused almost entirely on matters of communication. The philosophical content is easy by comparison.

Stoicism vs. Objectivism: What Is (and Is Not) Under Our Control? (Tuesday, August 31)

Objectivism holds that it’s vital to understand what things are under our control and what are not. To avoid passive resignation toward what we can change and futile rebellion against the unchangeable, we need to internalize the right perspective on this issue. This talk contrasts the Objectivist perspective on this question with that of Stoicism. Both philosophies regard the issue as of central practical importance to a good life, but they differ in fundamental ways that are instructive to explore.

NI: Why do we hear so much about Stoicism these days? Why has this ancient philosophical theory gotten so much attention?

AS: The short answer, I think, is that people need a philosophic framework, and these days many are looking outside of organized religion to find one. In that context, contemporary advocates of Stoic philosophy like Massimo Pigliucci, Donald Robertson, Ryan Holliday, Tim Ferris are pitching Stoicism as a practical framework with insights and perspective that you can apply now to your life. It’s even become popular among, and being touted by, the Silicon Valley crowd.

NI: You’ve done another OCON talk and an article on the subject of Stoicism. What’s new about your angle in this talk?

AS: This talk focuses specifically on what is, and is not, under our control, and the implications of our answer to that question. If you’re familiar with the famous Serenity Prayer or what Ayn Rand writes about in her essay “The Metaphysical Versus the Man-Made,” it will basically address that issue. Both Stoicism and Objectivism think that what is fundamentally under our control is something cognitive. The Stoics say it’s our ability to control what judgments we accept about facts and values. Objectivism says it’s our choice to think or not to think, our choice to exercise our reason or not. So, I want to look at how these two viewpoints compare and contrast, and how each philosophy’s take on free will impacts its conception of what we can and can’t control.

NI: How did you get interested in comparing and contrasting Stoicism with Objectivism?

AS: I’ve been studying Objectivism since I began reading Rand’s work in the early 90s. I discovered Stoicism during my doctoral program in philosophy at Johns Hopkins University. I was specializing in ancient Greek philosophy, and during my time at Hopkins I had the opportunity to explore Stoicism in a serious way. I also later taught Stoicism, and other Hellenistic philosophies, as a professor. The comparative aspect this talk grew in large part out of my teaching in ARI’s Objectivist Academic Center, where I’ve introduced students to Stoic philosophy to get them grappling with major philosophic issues that both Stoicism and Objectivism take really seriously — one of which is the question of what we can and cannot control.

The editors of New Ideal are Onkar Ghate, Elan Journo and Keith Lockitch.