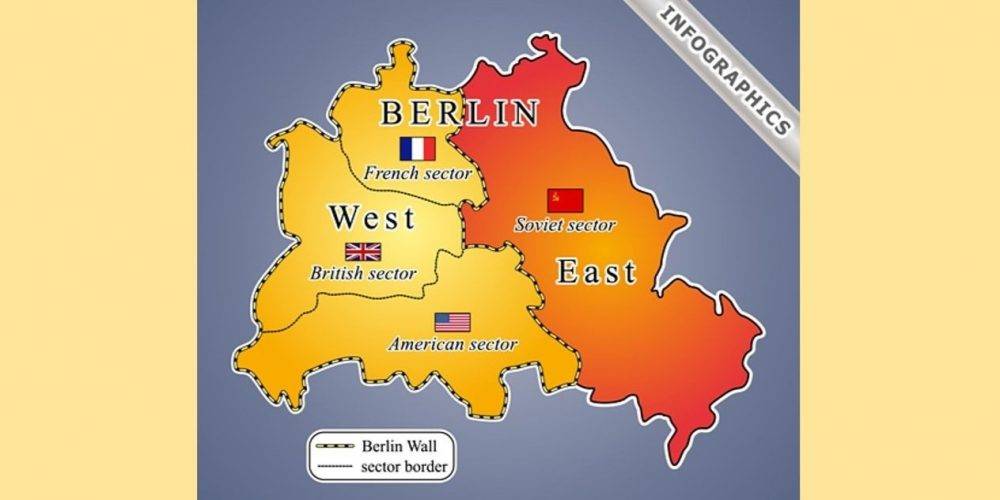 Ayn Rand on the Moral Foundations of the Berlin Wall

When the Berlin Wall was erected in August 1961, to stop the flood of refugees from communist East Germany into capitalist West Germany, Ayn Rand was well positioned to state its true meaning to the world.

A native of Russia, Rand was twelve years old when she first heard the communist slogan that man must live for the state — and she immediately condemned it as evil, even as the Russian Revolution established its iron grip on the nation. Her first novel, We the Living, published ten years after she had escaped to America, told a semi-autobiographical story of young lovers whose lives and hopes are crushed by the Soviet state.1 In the 1940s, Rand was an outspoken critic of Russian propaganda in movies and Russian infiltration in America’s government.

READ ALSO:  The Berlin Wall and the Evil of Socialism
In the early 1960s, following on the publishing success of her masterwork, Atlas Shrugged, Rand was in demand on college campuses, lecture halls, and radio and television as an interpreter of culture and current events. When the Los Angeles Times invited her to write a syndicated column starting in June 1962, her first contribution introduced her philosophy, Objectivism, which upholds rational self-interest and condemns altruism — the doctrine that “man has no right to exist for his own sake, that service to others is the only moral justification of his existence, and that self-sacrifice is his highest moral duty.” Using the Berlin Wall and other recent horrors as examples, Rand challenged her readers to see a link between that altruist morality and the disturbing state of the world around them:

You may observe the practical results of altruism and statism all around us in today’s world — such as the slave-labor camps of Soviet Russia, where twenty-one million political prisoners work on the construction of government projects and die of planned malnutrition, human life being cheaper than food — or the gas chambers and mass slaughter of Nazi Germany — or the terror and starvation of Red China — or the hysteria of Cuba where the government offers men for sale — or the wall of East Berlin where human beings leap from roofs or crawl through sewers in order to escape, while guards shoot at fleeing children.

But Rand was just getting warmed up. On August 17, 1962, a young East German bricklayer named Peter Fechter jumped from the window of a building near the wall and into a “death strip” patrolled by armed East German border guards. Fechter ran across this strip to the main wall, which was over six feet high and topped with barbed wire, and started to climb. But before he could reach the top, guards shot him in the pelvis. He fell back to earth and lay there in the death strip, helpless, screaming, bleeding to death with no medical help from the East German side, and inaccessible to the crowd of West German onlookers and journalists. An hour later, he was dead. The next month, Rand published “The Dying Victim of Berlin,” in which she used the example of America’s foreign policy to describe “the process by which the morality of altruism is destroying the world.”

Using the Berlin Wall and other recent horrors as examples, Rand challenged her readers to see a link between that altruist morality and the disturbing state of the world around them.
The nation, she argued in that essay, is draining its economy to fund a crusade against communism while “condemning, denouncing and apologizing for” its only alternative: capitalism. How, she asked, can the Soviet Union get away with such atrocities as the detonation of the biggest nuclear bomb and “the erection of the concentration-camp wall in Berlin”? It’s because Russia is “secure in the knowledge that communism is the most consistent political embodiment of altruism — of general self-sacrifice” and is therefore morally emboldened to send a message “that the world is theirs to take over.”

This is the purpose of shooting an eighteen-year old boy who tried to escape from East Berlin, and letting him bleed to death at the foot of the wall, in the sight and hearing of the Western people.

West Germany is the freest, the most nearly capitalist economy in Europe. The contrast between West and East Berlin is the most eloquent modern evidence of the superiority of capitalism over communism. The evidence is irrefutable. Russia does not intend to refute it. She is staging an ideological showdown: she is spitting in our face and declaring that might is right, that brutality is more powerful than all our principles, our promises, our ideals, our wealth and our incomparable material superiority.

Such is the silent symbol now confronting the world: the steel skyscrapers, the glowing shop windows, the glittering cars, the lights of West Berlin — the achievement of capitalism and of capitalism’s essence: of free, individual men — and, lying on its doorstep, in the outer darkness, the bleeding body of a single, individual man who had wanted to be free.

In the ensuing decades, Rand never stopped reminding the world of Soviet Russia’s evil and of that evil’s source in the morality of altruism. During her last public speech, in 1981, the Q&A session featured this exchange:

Ayn Rand: Russia as such was never a threat to anyone. Even little Finland beat Russia twice during World War II. Russia is the weakest and most impotent country on Earth. If they were in a war, most of the miserable Russians would defect. But Russia has one weapon by default which we have surrendered, and that is the morality of altruism. So long as people believe that Russia represents a moral ideal, they will win over us in every encounter. That is one of the reasons for dropping altruism totally, consciously, as the kind of evil which it really is.

When the Berlin Wall fell on November 9, 1989, Ayn Rand had been dead for seven years. But we know from her many writings on the subject that she would have joined the civilized world in celebrating the demise of that monstrosity.2 However, she would doubtless have reminded us that so long as altruism reigns unchallenged, such evils — and worse ones — are inevitable in the future.