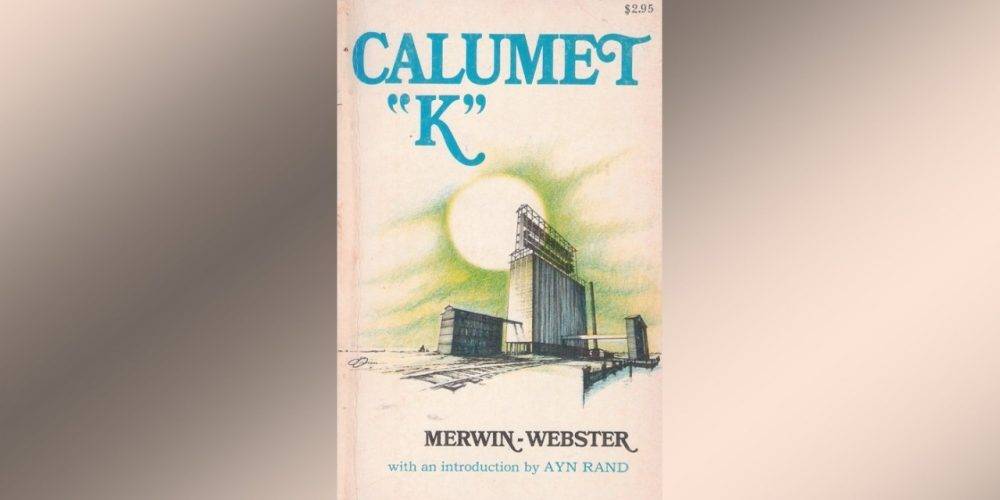 Fans of an author naturally want to know more about that author’s favorite books. Ayn Rand fans looking for holiday reading may want to consider checking out the book that she described as her favorite novel: Calumet “K” (1901) by Samuel Merwin and Henry Kitchell Webster.

What made the book her favorite? Rand explained her evaluation in a 1967 introduction to a new edition of the book. “It is not a great work of literature — it is a work of light fiction,” she wrote, which lacked “the most important ingredient of good fiction, a plot structure.” Its style was “undistinguished.” But the book had “one element that I have never found in any other novel: the portrait of an efficacious man.”1

That man is Charlie Bannon, a construction superintendent in the Midwestern United States. The story sounds mundane: it concerns Bannon’s struggle to build a grain elevator on a tight deadline and in the face of economic, legal, and labor-related obstacles. Even so, Rand — whose own fiction valorizes productive businesspeople, engineers, and creators in all fields — found the story suspenseful.

Here is a brief sample from the book that shows how Bannon resolves a labor dispute about the need to work over Christmas. The situation is similar to that in a famous scene between Ebenezer Scrooge and Bob Cratchit in A Christmas Carol. But both the character of the men and the outcome of the dispute are quite different from Charles Dickens’s tale:

For all Bannon’s foresight, there threatened to be a hitch in the work on the gallery. The day shift was on again, and twenty-four of Bannon’s forty-eight hours were spent, when he happened to say to a man: —

“Never mind that now, but be sure you fix it tomorrow.”

“Tomorrow?” the man repeated. “We ain’t going to work tomorrow, are we?”

Bannon noticed that every man within hearing stopped work, waiting for the answer. “Sure,” he said. “Why not?”

There was some dissatisfied grumbling among them which he was quite at a loss to understand until he caught the word “Christmas.”

“Christmas!” he exclaimed, in perfectly honest astonishment. “Is tomorrow Christmas?” He ran his hand through his stubby hair. “Boys,” he said, “I’m sorry to have to ask it of you. But can’t we put it off a week? Look here. We need this day. Now, if you’ll say Christmas is a week from tomorrow, I’ll give every man on the job a Christmas dinner that you’ll never forget; all you can eat and as much again, and you bring your friends, if we work tomorrow and we have her full of wheat a week from today. Does that go?”

It went, with a ripping cheer to boot; a cheer that was repeated here and there all over the place as Bannon’s offer was passed along.

So for another twenty-four hours they strained and tugged and tusselled up in the big swing, for it was nothing else, above the railroad tracks. There was a northeast gale raging down off the lake, with squalls of rain and sleet mixed up in it, and it took the crazy, swaying box in its teeth and shook it and tossed it up in the air in its eagerness to strip it off the cable. But somewhere there was an unconquerable tenacity that held fast, and in the teeth of the wind the long box grew rigid, as the trusses were pounded into place by men so spent with fatigue that one might say it was sheer good will that drove the hammers.2

This scene reflects some of the key elements of the book that Rand admired so much. It shows Bannon’s purposefulness and his typically American “can-do” attitude. The story is “neither pro-business nor pro-labor, but pro-individual, i.e., pro-human ability.” In particular, Bannon’s success in this scene at motivating his men to work even on Christmas reflects another aspect of the book’s portrayal of Bannon that Rand noted:

Bannon’s leadership is the decisive factor in the issue of morale or lethargic indifference on the part of all the workers on the job. His self-confidence, his demanding standards and his strict fairness bring out the best in them: pride in their work, conscientiousness, energy, enthusiasm — qualities they were beginning to lose under his incompetent predecessor. Their potential virtue is like an inert, responsive mechanism that can swing either way; Bannon is the spark plug. They respond when they know that their best will be appreciated.3

The character of Bannon influenced Rand’s own literary aspirations. In early notes (ca. 1927) on a film scenario called “The Skyscraper,” Rand describes its hero in a way that should sound familiar to fans of The Fountainhead: “The victory of a man over the town, rising above it, to the sky. The spirit of Calumet ‘K.’”

Calumet “K” is now in the public domain and easily accessible in a variety of forms. There’s a facsimile of the 1905 edition on Google Books, a variety of different electronic editions at Project Gutenberg, and even a free audio version from LibriVox. If you want to read Ayn Rand’s full introduction to the novel, it is reprinted in the October 1967 edition of The Objectivist, and also in The Ayn Rand Reader.