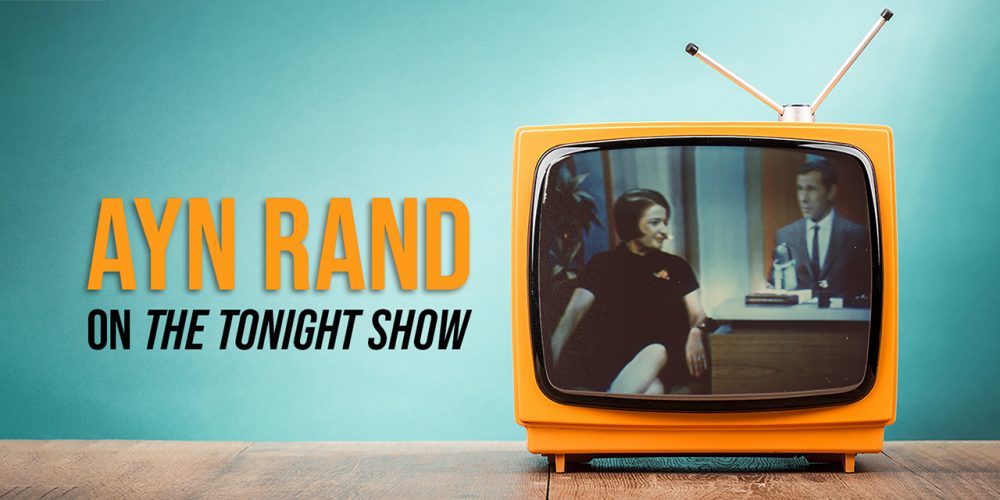 All three of Rand’s provocative interviews with Johnny Carson are now online.

Ayn Rand appeared three times in 1967 on The Tonight Show Starring Johnny Carson, discussing an astonishing array of controversial issues in terms designed for a broad television audience. All three interviews — one video and two audio — are now available on the Ayn Rand Institute’s YouTube channel (the two audios not having been heard publicly since the 1960s). Historical context for the interviews is available in my half-hour video session with Elan Journo and my in-depth New Ideal article, “Ayn Rand in America’s Living Rooms: The Tonight Show, 1967.”

Carson began this interview by asking Rand to summarize her philosophy of Objectivism. Rand did so concisely, explaining in essentials that she stood for reason, rational self-interest, laissez-faire capitalism and individual rights. He then invited Rand to plunge into two of the most controversial topics in 1967 America: the Vietnam War and the military draft. “I am against the war in Vietnam because it is a useless and senseless war, and it does not serve any national interest,” Rand told Carson. And she objected to the military draft on moral and practical grounds.

Reaction across the country to Rand’s appearance was strong. A Phoenix bookseller was interviewed about the effect on sales of Capitalism: The Unknown Ideal: “‘We’d had the book here for about a year,’ said Terttu Koso, manager of a Doubleday book store, ‘and there didn’t seem to be much interest in it. Then, right after the show, we could have sold 100 copies of it if we had had them — and hard-cover, too, with nobody even asking about the price!’”

In her second interview, Rand continued to promote her book Capitalism: The Unknown Ideal and one of its essays, “The Roots of War.” Rand explained how statism — any system, such as communism, fascism, Nazism or the welfare state, that subordinates the individual to the state — leads to war. Addressing those who looked to the United Nations as the world’s best hope for peace, Rand declared it a corrupt organization that should not exist.

Following a commercial break — when a typical Tonight Show guest might be engaging in comedic banter or introducing a clip from his latest movie — Rand launched a sustained assault on Pope Paul VI’s recent encyclical “On the Development of Peoples.” The pope’s attack on capitalism, Rand explained, stems from the morality of altruism and demands that the world’s wealthy sacrifice their standard of living for the sake of others — “the happier, the more successful, the more productive we are, the more we should sacrifice.”

Following this October appearance, Rand received 2,839 letters and 75 phone calls, as well as 303 new subscriptions to The Objectivist. According to one report, The Tonight Show received “a whopping 3,000” letters, “the greatest mail response of this year for ‘Tonight’ and one of the largest the show has pulled in its history.”

Rand’s third and final appearance on The Tonight Show came just twelve days before Christmas. Instead of addressing hot topics in politics and foreign policy, this episode centered on Rand’s perspective on literature, drama and movies. Rand lamented the decline of Romanticism — works of art that “project man’s highest potential” by presenting “things as they might be and ought to be.” In light fiction, however, Rand observed that Romanticism survives in such authors as Mickey Spillane, Donald Hamilton and Ian Fleming, and in movies like Dr. No, which display a command of plot structure and a sense of drama and feature the conflict of good and evil.

In this video, Elan Journo and I discuss the historical context surrounding Rand’s remarkable Tonight Show appearances — including Rand’s ascent to the status of in-demand public intellectual, Johnny Carson’s developing reputation as a popular late-night host, Rand’s ground rules for the appearance, Carson’s interviewing style, and America’s cultural landscape in the 1960s.