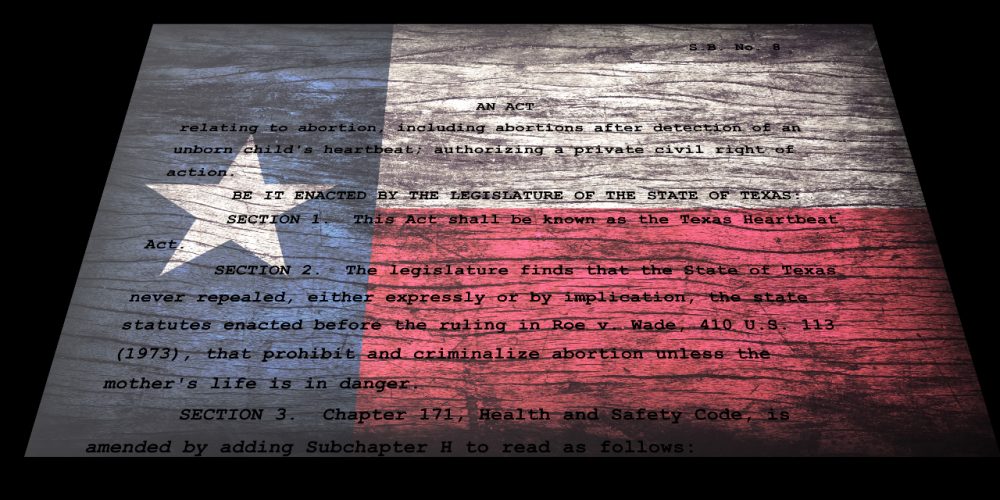 The Dark Roots of the Texas Abortion Ban’s Vigilantism

Anyone and everyone is empowered to enforce laws against crimes with no real victim.

Texas’s SB8 anti-abortion law, now being contested in the U.S. Supreme Court, is rightfully denounced for its unusual enforcement mechanism. It empowers virtually any private citizen to sue anyone who “aids or abets” the provision of abortion after a detected fetal “heartbeat.” With no way of telling who or how many will sue next, Texas abortion providers have been terrorized into curtailing their services for most women.

The law’s vigilantist enforcement mechanism was crafted to avoid the prospect of judicial review. Supposedly, the state can’t be sued over a law it doesn’t enforce. But there’s something deeper and darker motivating its advocates to demand a right to take the law into their own hands.

The law multiplies litigants because it requires no proof of specific harm to anyone’s property or rights. None could be given: there is no specific, legally recognized person to whom the life of an unwanted fetus is valuable. It’s not beloved by a mother. No family or friends are there to grieve the loss of someone close. The fetus itself can’t recognize anything of value or act to achieve it. There is no citizen with the record of a life for the state to speak on behalf of.

Fundamentally, a fetus is not a real victim because it is not an individual human being with rights. Rights protect the spheres of freedom each of us needs to live active lives in pursuit of our happiness. The fetus can’t yet act in the world. Only at birth does it become individuated from its mother, acquire a nascent ability to act, and with it, a claim to individual rights.

Supporters of SB8 deny this, relying on the article of faith that a fetus has some alleged impersonal value granted by an allegedly supernatural source. When blind faith drives public policy, rational procedures for protecting real human values go out the window. Threats to this purported value aren’t threats to anyone in particular. But because it’s taken on faith that some value is threatened, it’s seen as everyone’s duty to oppose it — hence the urge to enlist citizens to punish abortion providers.

Laws implementing very different political goals are driven by the same mindset. Consider the California Environmental Quality Act, which empowers private individuals to sue to block new developments threatening “a significant effect on the environment.” It has frozen the construction of new housing in California and forced the University of California to pause its enrollment growth. Even the construction of solar farms has been threatened by use of the law. Such a law does not aim to protect an environment conducive to human well-being. Only the preservation of the alleged impersonal value of pristine nature independent of human concerns or needs could be used to justify these decisions.

READ ALSO:  Ayn Rand's Radical Case for Abortion Rights
Faith in “impersonal value” generates a very real threat to the values of real people: the value of a home or a college education or energy to a California resident — and that of a young woman’s right to live her life without fear of an enforced pregnancy.

A chaotically litigious society is not the worst outcome to fear from this faith-based viewpoint. It can also empower true believers to commit acts of violence. As Ayn Rand described it, “If a man believes that the good is intrinsic in certain actions, he will not hesitate to force others to perform them. If he believes that the human benefit or injury caused by such actions is of no significance, he will regard a sea of blood as of no significance.” This belief is a common thread that unites religious abortion-clinic bombers and eco-terrorists who torch newly built homes for encroaching on “nature.”

Texas’s anti-abortion law is ominous and outrageous. But it isn’t just the product of crafty legal strategy. It’s the product of a dangerous article of faith about the nature of value that too many people take very seriously.