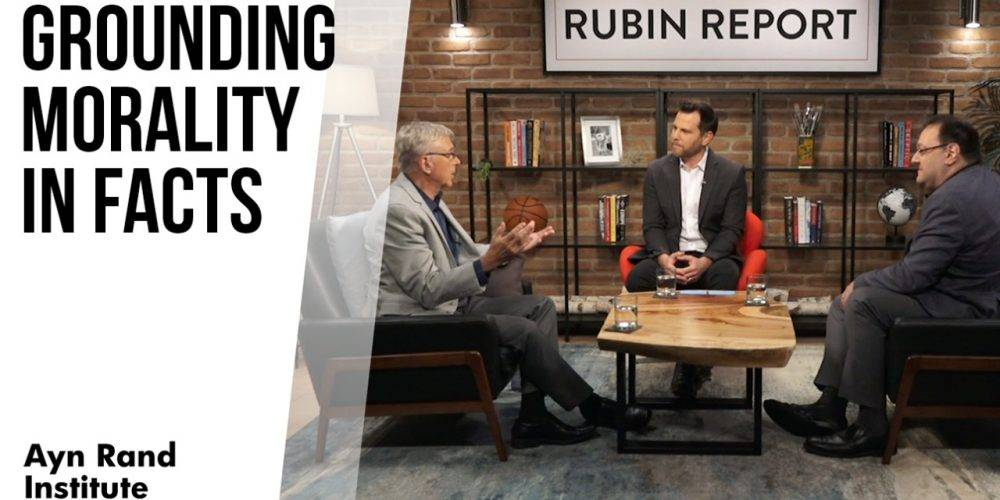 The Rubin Report: Why It Is Critical to Be Fact-Oriented

Recently, we featured in New Ideal the Ayn Rand Institute’s partnership with Dave Rubin to produce a series of Rubin Report interviews exploring Objectivism and its view of happiness. See the episode list below for the first four videos.

Today, we continue the series with a deep dive into the question of why it is critical to be fact-oriented in the pursuit of happiness. In this interview, Rubin sits down with two philosophers — Harry Binswanger, a member of ARI’s board of directors, and Gregory Salmieri, Anthem Foundation fellow and lecturer at Rutgers University — to discuss the relationship between facts and values, and why that issue — which might seem abstract and esoteric — is crucially relevant to the achievement of happiness.

This being Binswanger’s first appearance on the Rubin Report, Rubin took the opportunity to ask him, as someone who knew Ayn Rand well, what she was like as a person, and why the “meme” about Rand and about Objectivists is often negative. Binswanger charmingly recounts some of his experiences interacting personally with Rand — and both Binswanger and Salmieri note that a highly provocative thinker who challenges people’s deepest-held beliefs is bound to provoke strongly charged reactions.

After that introductory discussion, Rubin plunges right into the philosophical deep end by asking about the “Is-Ought” gap. This is the age-old philosophical question of how ideas about what we “ought” to do are related to questions about what “is” — in other words, how values relate to facts.

Binswanger and Salmieri question whether the moral lessons conveyed by Old and New Testament stories of sacrifice really do convey any truth, psychological or otherwise, when the morality of self-sacrifice cannot be derived from facts.
Rand’s philosophy offers a fresh and radical solution to this question. Salmieri notes how Rand draws on her distinctive view of how all concepts are formed on the basis of facts, while Binswanger points to the specific facts about living organisms from which Rand thought value concepts are formed.

Readers may recall that Rubin hosted a panel conversation at last summer’s Objectivist conference that included Salmieri as well as Jordan Peterson. That conversation delved even more deeply into the “is-ought” issue and Rand’s distinctive approach to it.

It also touched on a number of other themes relevant to the current discussion. Referring back to that event, Rubin asks about the connection between morality and stories.

Peterson has argued that religious mythology conveys a kind of psychological truth or significance even when it is not literally true. While acknowledging that religious mythology can be artistically powerful, Binswanger and Salmieri question whether the moral lessons conveyed by Old and New Testament stories of sacrifice really do convey any truth, psychological or otherwise, when the morality of self-sacrifice cannot be derived from facts. Great art that draws on a more rational moral code, on the other hand, can provide inspiration, clarity, and the philosophical perspective needed to overcome obstacles in the pursuit of happiness.

Much of the rest of the conversation centers on the implications and importance of a philosophical commitment to the facts of reality:

After a wide-ranging intellectual discussion with a focus on the rigorous development of standards of morality and science, it is refreshing that the conversation ends with Rubin’s pointed question, “Where does fun fit into this?” To find out whether Binswanger and Salmieri are any fun, and whether they think this is what counts in a life lived in the pursuit of happiness, watch the video until the end!

Audio podcasts of this episode are available on iTunes and Stitcher.

To explore this topic further check out “David Hume: Causality, the Problem of Induction, and the Subjectivity of Ethics” on ARI Campus.