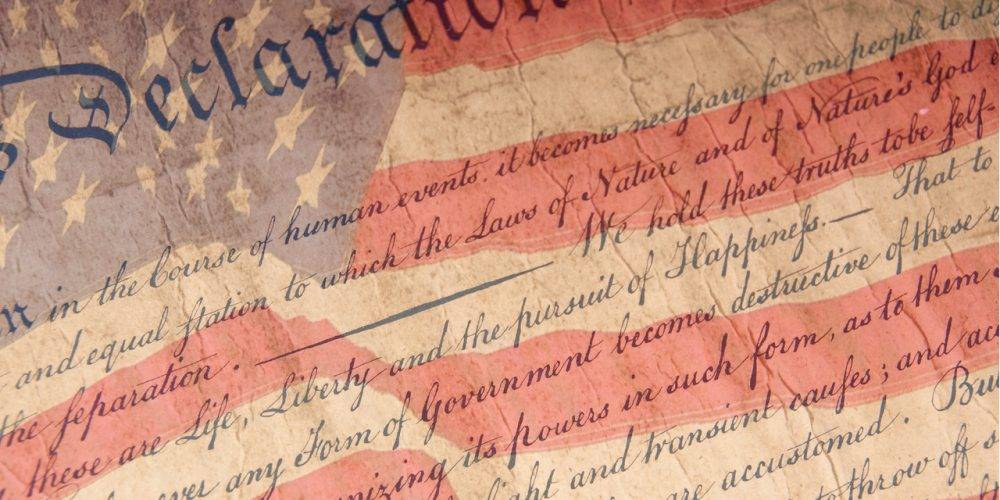 America Was Founded on Secular Ideals

If we project current troubling trends into the future — trends such as the splintering of American society into warring tribes based on race, sex, age, place of birth and other accidental factors, plus the emergence of Trumpian authoritarianism — it’s natural to be concerned about America’s fate. There’s a growing sense that the nation’s very foundation is crumbling.

But what is that foundation? What are the values that gave rise to America’s historically unprecedented successes? If the nation is to survive and prosper, it’s essential to get this right. Looking for answers, one encounters a growing number of popular writers who claim that America was founded on religious values and that modern civilization is doomed unless we can mount a return to religion.

Ben Shapiro, in his new book The Right Side of History, argues that Judeo-Christian values “undergirded America’s founding” and that modern civilization cannot survive unless individuals commit to “serving God and following Him.” Talk show host Dennis Prager claims that “America is founded on the idea that God is the source of values.” Jordan Peterson, though not especially clear in his usage of religious concepts, nevertheless asserts that God is “the highest value in the hierarchy of values” and that the Bible contains our “best set of instructions” for living. Even an atheist like Douglas Murray pleads that religious values must be respected lest society fall victim to the secular view that we all live “meaningless lives in a meaningless universe.”

In this context, I’m finding it useful to revisit a lecture (and subsequent essay) by Objectivist philosopher Leonard Peikoff, squarely presenting an opposing view. In “Religion Versus America,” Peikoff argues that it was secular, pro-reason, pro-Enlightenment values that gave rise to the American founding — and that religion was and remains the enemy of Americanism.

READ ALSO:  Rand on Happiness: Filling Your Life with Meaning, Art, Love
While Peikoff does not deny the presence of religion in the founding era, he argues that the creation of America represented a rejection of every essential religious dogma. In place of faith (“belief in the absence of evidence”), the Founders venerated reason and science. In place of sacrifice to God’s will, the Founders enshrined the pursuit of individual happiness. In place of theocracy and authoritarianism, the Founders designed a government to protect the liberty of the individual.
Deism cannot, properly speaking, be classified as a religion. It is a stage in the atrophy of religion; it is the step between Christianity and outright atheism.
Peikoff’s brief but comprehensive historical survey emphasizes the achievements of secular Greek culture — “logic, science, mathematics, and a magnificent, man-glorifying art” — and the re-introduction of Aristotle to Europe through Thomas Aquinas. Peikoff explains how the subsequent breakup of feudalism, followed by the Renaissance, the Enlightenment, and the Age of Reason, laid the groundwork for America’s founding and for the stupendous achievements of Western society in the nineteenth and twentieth centuries.

Here’s one particularly telling passage in which Peikoff answers those who claim America was born a Christian nation:

Such were the watchwords of the period: not faith, God, service, but reason, nature, happiness, man.

Many of the Founding Fathers, of course, continued to believe in God and to do so sincerely, but it was a vestigial belief, a leftover from the past which no longer shaped the essence of their thinking. God, so to speak, had been kicked upstairs. He was regarded now as an aloof spectator who neither responds to prayer nor offers revelations nor demands immolation. This sort of viewpoint, known as deism, cannot, properly speaking, be classified as a religion. It is a stage in the atrophy of religion; it is the step between Christianity and outright atheism.

Peikoff’s talk was given in 1986, in response to the Reagan-inspired “New Right” movement in which evangelical groups such as Rev. Jerry Falwell’s Moral Majority pressed for “faith-based” political reforms: restricting abortion, injecting prayer and “creationism” in public schools, criminalizing homosexuality, censoring pornography.

Although Donald Trump does not, himself, embody this “Religious Right” movement, evangelical influence remains sufficiently strong to have induced his selection of Indiana Gov. Mike Pence (“I’m a Christian, a conservative, and a Republican, in that order”) as his running mate. More ominously, prominent intellectuals are making it increasingly respectable to argue that religious values not only underlay America’s founding but also constitute a promising way forward for both America and Western civilization.

Peikoff, in sharp contrast, makes clear that resurrecting religious influence in the hopes of salvaging our future would be an offense against history and philosophy and a disaster in practice.