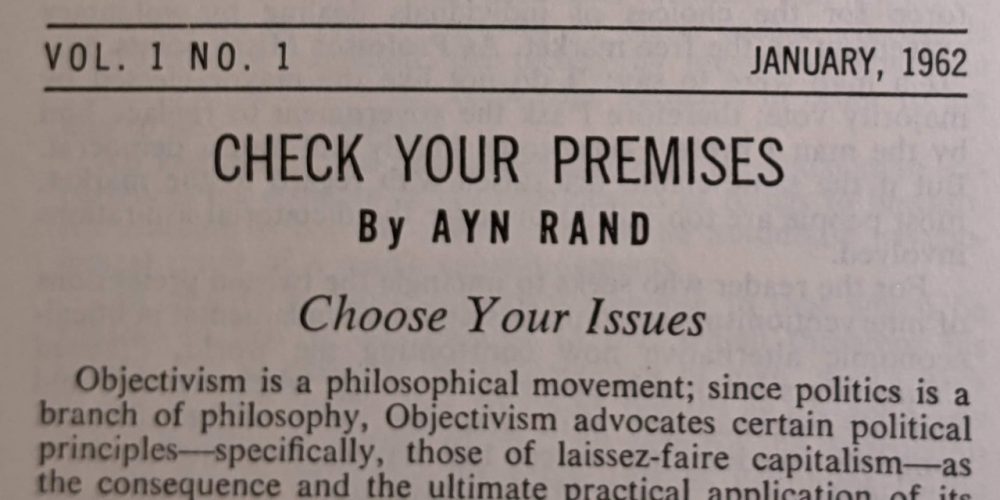 Ayn Rand on How to Choose Your Political Battles

Philosophy helps us identify the gravest threats to intellectual and economic freedom.

Following the massive success of Atlas Shrugged, published in 1957, Ayn Rand attracted a large and devoted fan base interested in her radical new philosophy. To help admirers understand her ideas and apply them to their lives and the cultural-political issues of the day, she launched her own publication in 1962: the Objectivist Newsletter. As she explained in the introduction to her book The Virtue of Selfishness:

The Newsletter deals with the application of the philosophy of Objectivism to the issues and problems of today’s culture — more specifically, with that intermediary level of intellectual concern which lies between philosophical abstractions and the journalistic concretes of day-by-day existence. Its purpose is to provide its readers with a consistent philosophical frame of reference.

In her first article for the newsletter, “Choose Your Issues,” Rand set out to distinguish Objectivism, as a movement, from more familiar political alternatives: “Objectivism is a philosophical movement” that advocates certain political principles, “specifically, those of laissez-faire capitalism.”

But politics, Rand argued, is downstream from philosophy. Establishing a free society requires first changing the culture’s dominant philosophic ideas. It means challenging the ideas of mysticism, altruism and collectivism that are driving the United States further and further toward statism. It also means replacing the conservatives, who meekly accept statist premises, with real “radicals for capitalism” who recognize the futility of trying to “achieve political freedom by stealth.”

Rand’s analysis is still relevant today. For example, the FCC not only continues to police speech on broadcast television and radio, but in recent years it has sought to violate the economic freedom of internet service providers with so-called net neutrality laws. Antitrust, meanwhile, is being used to threaten both the intellectual and economic freedom of tech companies — and of all of us who rely on their achievements to promote our own goals and ideas.

What should be a person’s proper response to these threats, in Rand’s view? “[S]tudy these issues, watch their developments and make himself heard in public, on any scale open to him.”

“Choose Your Issues” is republished in full in ARI’s 2020 Annual Report beginning at page 22: