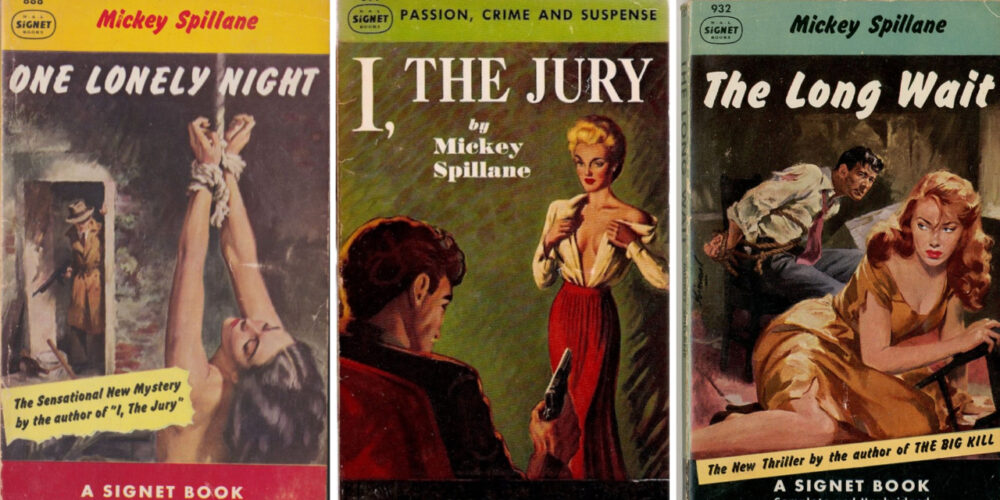 Approximately one year after the broadcast, Ayn Rand again used her public voice, this time through her syndicated weekly column in the Los Angeles Times, to pay tribute to Mickey Spillane. In her column of September 2, 1962, she praised his “brilliant literary talent,” his “originality, his imagination, his sense of drama, the ingenuity of his plot-structures.”1 Here are some of her comments:

Mickey Spillane is one of the best writers of our time. He has won an enormous popular following — but no acknowledgment. He stands as a measure of the gulf between the public and its alleged intellectual leaders. . . .

Most of today’s “intellectuals” — the statist collectivists, the worshippers of “the masses,” the servants of “the people” — are savagely antagonistic to the people’s standards and to every authentic, popular value in art.

They feel hatred for any projection of man as a clean, self-confident, efficacious being. They extol depravity; they relish the sight of man spitting in his own face. The object of their deepest hatred (and fear) is moral values. . . .

Spillane’s view of life has a strong element of tragic bitterness: he projects the belief that evil is powerful (a view with which I do not agree), but that man has the capacity to fight it and that no allowances, concessions or compromises are morally conceivable or possible (with which I do agree). His hero, Mike Hammer, is a moral avenger, passionately dedicated to justice, to the defense of the wronged and to the destruction of evil.

That bitter, but intensely moralistic view of life is the key to the secret of Mickey Spillane’s unparalleled popularity throughout the world. He is the true voice of the people, in the twentieth century.2

She sent him the column. Her letter began:

Dear Mickey: I am enclosing a little present for you which, I hope, will please you. This is my way of fighting a battle for justice which is as tough as Mike Hammer’s.3

In writing for him and about him, she wanted to do for him what had not been done for her. Rand had had experience with not only caustic critics, but silent fans. She knew that some people admired her work and were afraid to say so. She wrote about this phenomenon in her introduction to the reissue of The Fountainhead in 1968. The following passage was not included in the published introduction. It is, however, important and, I believe, relevant in the context of her decision to pay tribute to Mickey Spillane:

The instances of men who paid me unsolicited, extravagant compliments at private gatherings, but never stated it in print or on public occasions, were too numerous to count. I do not mean the usual sort of gushers. Those men were prominent literary or professional figures who had no reason to flatter me; in many cases, they did not even say it to me, but to others, without knowing that I would ever hear about it. If such were their views, they had no reason to be afraid of expressing them publicly. Yet they kept silent. . . .

What I grasped was that this was deeper and worse than simple cowardice or conformity. For whatever complexity of reasons — whether out of fear, or bewilderment, or discouragement, or repression, or years of conditioning by altruism’s vicious dichotomy between the moral and the practical, with the consequent feeling that the good is impractical, and the practical has no place for values — those men were consigning their values, the things they loved or admired or enjoyed, to the airless dungeon of subjectivism, as private fantasies or fragile private treasures unfit for the sunlight of reality.4

In 1964, she not only stood up for him, but stood up to him.5 When she read his new novel, Day of the Guns, she objected to his new hero, Tiger Mann, and to the novel’s political implications. She took notes about her observations.6 She voiced her observations publicly, in the Objectivist Newsletter in October 1964.7 She felt obligated, she said, “to state for the record that I object emphatically to the political views expressed in this novel, which are shocking and rationally indefensible.” She objected to the cynical hero and his “semi-governmental gang.” She objected to the use of force unlimited by any framework of rights.

She chose to write about Day of the Guns not in order to condemn Mickey, but to explain to her readers that her previous statements about his work did not apply to this novel. She also wished to explain her views to Mickey himself. She sought to have an impact on Mickey as a writer, to encourage him to do better.

She then sent her comments to Victor Weybright, chairman and editor of New American Library. “Please let me know your reaction and whether you think it might make him pause to reconsider his attitude. If you think it advisable, please send it to him.”8 Victor Weybright did so: “I know you will pay some heed to the admonitions of Miss Rand, for the good of the cause — yours and your publishers.”9

In spite of her negative opinion of Day of the Guns, Ayn Rand continued to speak up for Spillane’s earlier work. On December 13, 1967, during her third appearance on the Johnny Carson show, she praised his writing.10 She never retracted the positive statements she had made about his early Mike Hammer novels. The Romantic Manifesto features positive appraisals she continued to make of his “plot ingenuity and moralistic style,” a style that is “reality-oriented and addressed to an objective psycho-epistemology.”11 In 1971, she named Mickey Spillane as one of her three living heroes, for his detective novels.12

She continued reading his work. His later novels indicated that he had been “disintegrating.” Writing to her own readers in the Objectivist Calendar, she commented that his work had “descended to the fully modern.”13 But even in the context of her disapproval for his recent work, she said, again, that she had liked his early novels.

During an interview in 2002, Mickey Spillane remembered with pleasure their conversations about personal and professional matters. They discussed a variety of subjects: the foolish interference of editors who do not know their job, Spillane’s war record, his work in the field of comic books, their backgrounds and life experiences.

Question: What do you remember discussing when you talked to her about the critics? She too was savaged by critics.

Answer: Oh, I know she was. We had the same feeling about critics. I don’t like them. She didn’t like them either. They always picked on her because she was successful. They don’t pick on the poor guy who doesn’t make a nickel.

When he was asked if he had discussed with her “the concept of the ideal man,” he replied: “Oh, she had John Galt. I had Mike Hammer.”15

Ayn Rand not only praised Spillane frequently, but she also brought him up in the context of authors who are conventionally admired. In The Romantic Manifesto, as noted, she praised his style, by contrast with that of Thomas Wolfe, and she clarified and dramatized what she meant by “sense of life” by describing her sense-of-life reactions to several writers. Three of them were classic writers who are generally considered important: Victor Hugo, Fyodor Dostoevsky, and Leo Tolstoy. But she also brought forward Mickey Spillane, who is rarely considered by others to be in that august company. “Spillane,” she wrote, “gives me the feeling of hearing a military band in a public park.” Once again, she was placing Spillane in distinguished company, as she had at the National Books Awards event. On that occasion, she had told Mike Wallace that the list of her favorite writers had four names: Victor Hugo, Dostoevsky, O. Henry, and Mickey Spillane.

Shoshana Milgram, PhD and associate professor of English at Virginia Tech, specializes in narrative fiction and film. Her scholarship includes introductions to Victor Hugo’s novels, a study of Ayn Rand’s life up to 1957, and articles on Dostoevsky, George Eliot, Nabokov, and others.