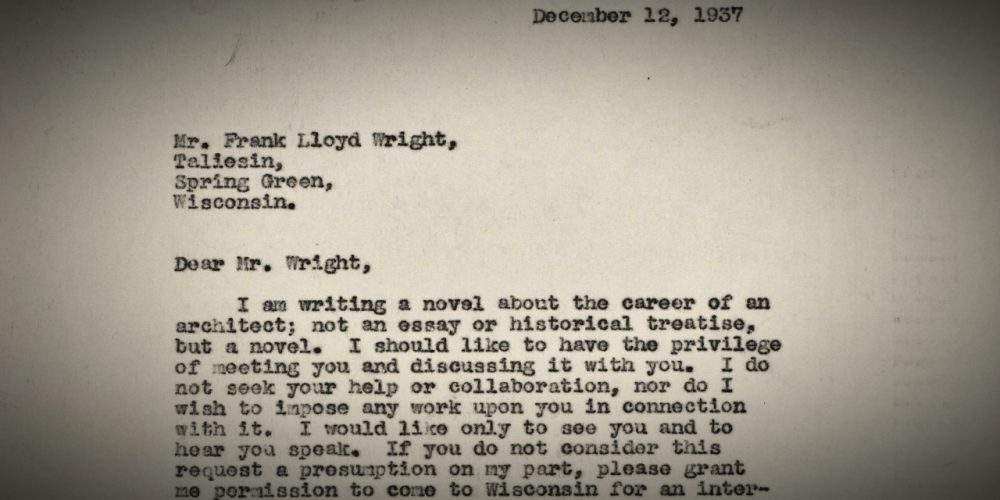 A new online exhibit offers readers the chance to journey deeply into the mind of Ayn Rand by reading her correspondence.

When Letters of Ayn Rand was first published in 1995, Leonard Peikoff introduced it this way: “It is almost eerie to hear her inimitable voice again, so many years after her death, but this book is Ayn Rand, exactly as I knew her. It captures her mind — and also her feelings, her actions, her achievements, her character, her soul.”

Now an expanded edition of Letters of Ayn Rand is freely available through an Ayn Rand Archives online exhibit that offers readers the chance to journey even more deeply into the mind of Ayn Rand. “This new edition is actually thirty percent longer by word count,” said editor Michael S. Berliner. “There are more than fifty new letters and lots of new commentary.”

While the original edition had 538 letters, the online edition has 590. Each letter appears in two forms: an image of the physical correspondence itself, whether typed or handwritten, and an easily readable transcript. According to ARI digital archivist Audra Hilse, the new electronic infrastructure underlying this exhibit will provide “a solid foundation for all of our future work, both within the Archives and for making more content available online.”

The letters range widely in content, covering philosophy, personal advice, business affairs, correspondence with Frank Lloyd Wright about The Fountainhead, and other subjects. “That Ayn Rand’s letters contain interesting philosophical content is a given, but I was fascinated by how much history there is in the letters as well,” Hilse observed. Among her favorites, Hilse highlights Rand’s correspondence with Isabel Paterson, Rose Wilder Lane, and Leonard Read, “which are certainly very philosophical, but also provide information about the history of the mid-twentieth-century pro-individualism movement in the U.S.”

The eight letters to philosopher John Hospers address philosophical issues that Rand did not address in print during her lifetime, such as her evaluation of the golden rule in ethics and whether rehabilitation should be one of the aims of a criminal justice system.

The exhibit includes fifteen letters to Alan Collins, Rand’s literary agent from 1943 to 1968. In a newly added seventeen-page letter to Collins, marked “confidential,” Rand documents her experiences working on the film version of The Fountainhead. After summarizing an on-set conflict related to the filming of Gary Cooper’s climactic speech and pointing out that her Hollywood agent did not seem to care about the integrity of her script, Rand quipped: “I am not sure whether he has ever read my book or not.” Dashes of humor like this one can be found throughout the letters.

Access the online edition here. And for more details about this new edition, read Michael S. Berliner’s preface below

Preface to the Second Edition of Letters of Ayn Rand

This new edition is indeed new. It is, in fact, 30 percent longer than the original edition. What makes it new? More than 50 letters have been added. The majority of these were unknown to me in 1995 and came to the Ayn Rand Archives from various sources, including the recipients and other archives. At least one was found folded inside other papers in the archives, which had yet to be fully inventoried in 1995. This edition also contains restored (relatively routine) content that was previously cut for the Penguin edition. As a consequence, every letter is complete.

However, much of the “newness” comes from commentary that I’ve written for this new edition. Commentary in the original edition was minimal, but not so here. Commentary preceding a letter is intended to provide context and make the letter more meaningful and interesting to the reader. This pre-letter material might include the motivation for the letter (if not obvious from the content), information about Ayn Rand’s relationship to the recipient, or merely biographical information about the recipient.

The post-letter material is intended to anticipate “whatever happened to?” responses from the reader. For example, if Ayn Rand wrote to her publisher with a suggestion, I note the response from the publisher and whether her suggestion was acted upon. Or the post-letter material might be more biographical. One example is the 1926 letter that she wrote to Lev Bekkerman—the opening letter in both editions. In 1995, we didn’t know what became of him, but we later learned much from her family’s Russian-language letters, which hadn’t yet been translated, and also from a Russian researcher, whom we employed to look into official Soviet documents. The result of these changes is, I think, a book with a more historical flavor than the original.

This new edition also contains some typographical changes from the Penguin edition. For example, in that edition, underlinings in the original typed or handwritten letters were converted to italics, whereas this edition returns those words to their original form. Ayn Rand was not consistent in her typing: book titles sometimes were typed with underlining, sometimes with quotation marks, and sometimes with all capital letters. She also, especially in the earlier years, followed the European style of placing end-quotes inside the punctuation. This usage was also “corrected” in the Penguin edition but now, as far as practical, reflects her original usage.

In his foreword to the 1995 Penguin edition, Leonard Peikoff wrote that when he was previously asked what Ayn Rand was like, his standard answer had been: “Read her novels; she was everything their creator would have to be.” But now, he writes, “I have a follow-up answer: ‘Read her letters.’” I think that this new edition will further your knowledge and appreciation of Ayn Rand.

INVITATION TO THE READER: In preparing this edition, I attempted to anticipate questions that the reader might have, particularly regarding background and follow-up to the letters. The added footnotes and commentary are the result. However, if there are additional questions (and comments) that you would like to ask, please email me at mberliner@aynrand.org.