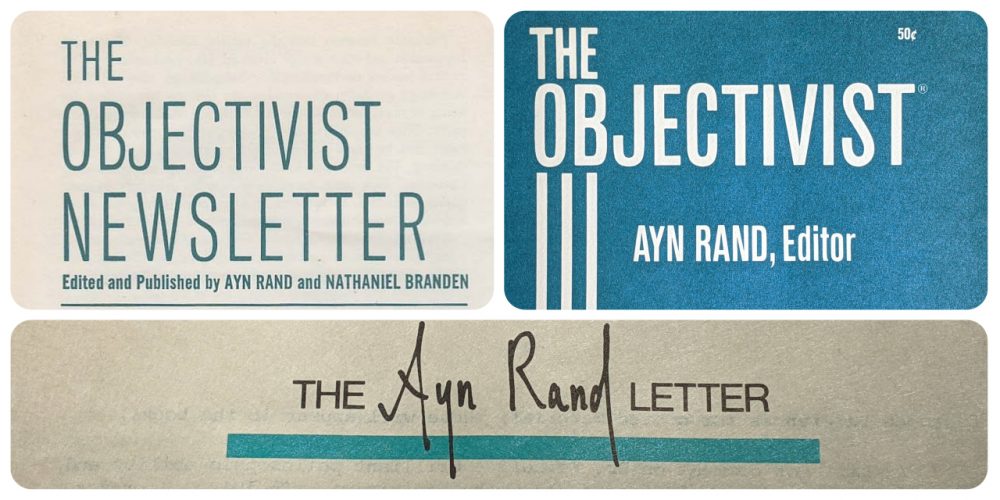 After publishing Atlas Shrugged in 1957, Ayn Rand turned her focus to writing nonfiction. Over the next twenty-five years, she generated articles that would fill all or part of seven nonfiction books.1 Most of those articles were published first in one of her three periodicals: the Objectivist Newsletter (1962–65), The Objectivist (1966–71) and the Ayn Rand Letter (1971–76).

But beyond the intellectual riches in those seven published anthologies are many forgotten treasures in the pages of her periodicals. Reading them permits a deeper appreciation of Rand’s unique philosophic mind, her penetrating insights on unfolding cultural trends, and her wide-ranging intellectual curiosity.

This article highlights some of the valuable content that’s accessible by purchasing physical bound volumes of those periodicals — not only the gems from Rand’s own hand but also the enlightening materials by other authors she handpicked and editorially supervised. Highlights are arranged topically rather than chronologically, with a brief indication of the source periodical (using initials: TON, TO and ARL) and date of publication.

A wealth of non-anthologized writing by Rand herself is available, including nineteen full-length articles dealing with politics and cultural trends.

On threats to freedom of speech

On the advance of statism and the “mixed economy”

Eight other articles chronicle the march of statism by dissecting the effects of other economic regulations and transfer programs resulting from a mixed economy, including “consumer protection” laws, wage and price controls, energy regulations and hunger programs.

On “polarization,” the Watergate Scandal, Nixon in China

In everything she wrote, Rand exposed and explained the philosophical causes of current events. But in a few of these articles she explained in more detail the dangers posed by conceptual distortions, smear campaigns, pragmatism and altruism.

In several other articles, varying in length, Rand deals specifically with presidential politics:

On art and literature

Six of Rand’s other articles deal with art and literature:

In addition, Rand filed a “Book Report” (TON October 1964) panning the latest novel by Mickey Spillane, whom she had praised for his earlier novels. A special note is appropriate for an article under the byline of Rand’s husband, Frank O’Connor, “as told to” Ayn Rand. It’s a review of a memoir by the actress Lillian Gish: The Movies, Mr. Griffith and Me. This lengthy article not only reviews the book but also interweaves personal recollections and evaluations of the motion picture industry by O’Connor (who worked as an actor in this period) and, one can surmise, by Rand herself.

Rand also published brief comments about the Apollo 8 astronauts’ prayers from space (TO November 1968), the Pueblo incident and the New York abortion law (TO February 1969), student violence (TO March 1969), and the shocking refusal of asylum to a Lithuanian sailor (TO January 1971).

Five non-anthologized articles contain Rand’s own reviews of books and movies: Ten Thousand Commandments by Harold Fleming (TON April 1962) and The Language of Dissent by Lowell B. Mason (TON August 1963), two books on American antitrust law; The God of the Machine by Isabel Paterson (TON October 1964), a “brilliant and extraordinary book” on political philosophy that “narrowly misses greatness”; Poverty Is Where the Money Is by Shirley Scheibla (TO August 1969), an exposé of the Johnson administration’s War on Poverty, with many examples of altruism’s evils; and “The War of Liberation in Hollywood” (TO June 1969) (cowritten with Erika Holzer), reviewing three movies: Charly, Bullitt and 2001: A Space Odyssey. These articles are worth further analysis in a separate article.

On the spread of Objectivism

The volumes also contain items relevant to Rand’s life and the Objectivist movement. “To Whom It May Concern” (TO May 1968) contains Rand’s explanation for permanently repudiating Nathaniel Branden and Barbara Branden. Several articles contain statements of policy concerning the use of Rand’s name and that of her philosophy, Objectivism, as well as the relationship between Rand and the public. In a note, Rand applauds the approach to intellectual activism described in a letter from a reader. There are also comments on the ending of The Objectivist and the ending of the Ayn Rand Letter.

Leonard Peikoff, who was Rand’s associate and friend for thirty years until her death in 1982, served as associate editor of The Objectivist (1968–71) and the Ayn Rand Letter (1971–76). He published excerpts in both periodicals from the manuscript in progress that he would publish in 1982 as The Ominous Parallels: The End of Freedom in America. Although superseded by publication of the final volume, some of those excerpts also feature introductions and postscripts by Ayn Rand.

The June 1962 issue of the Objectivist Newsletter contained a two-page “special supplement” by Peikoff called “Doctors and the Police State,” warning of the dangers of socialized medicine and urging readers to oppose the Kennedy administration’s King-Anderson bill, a progenitor of Medicare.

Peikoff also reviewed two volumes, A History of Western Philosophy by W.T. Jones and A History of Philosophy by Wilhelm Windelband (TON September 1964), and supplied an “Intellectual Ammunition Department” entry on ethical hedonism (TON February 1962). In the February 11, 1974, issue of theAyn Rand Letter he wrote a report on Ayn Rand’s visit to the U.S. Military Academy at West Point to deliver the talk that would become “Philosophy: Who Needs It.”

Articles on free will, self-esteem and more

A number of essays in the periodicals discuss the Objectivist theory of free will, misconceptions and fallacies Rand had identified, and topics related to psychology. Rand’s coeditor on both the Objectivist Newsletter and The Objectivist was Nathaniel Branden, a psychologist. Although she thoroughly repudiated Branden in 1968, she specifically endorsed everything he had published in those periodicals up to that time as “authentic sources of information on Objectivism.”6 These were articles over which she had exercised complete editorial control; nothing was published without her prior approval. Among those essays are:

Virtually every issue of the Objectivist Newsletter contained an installment of the “Intellectual Ammunition Department,” which answered questions from subscribers “that they find themselves unable to answer in philosophical or political discussions.”

Many of the non-anthologized articles by other authors in Rand’s three periodicals featured reviews of nonfiction books, novels, movies, plays and television shows.

In writing Atlas Shrugged, Rand kept a “Research or Documentation File” consisting of “events and pronouncements which illustrated the intellectual state of our culture and reflected the influence of philosophy.”7 She began sharing them with readers in a recurring “Horror File” segment of the Objectivist Newsletter and The Objectivist. It featured verbatim quotations from newspapers, magazines, books, speeches, and other sources, each illustrating some profound error or irrationality in metaphysics, epistemology, ethics, politics, esthetics, education or psychology — the type of error Objectivism was equipped to correct.8 The “Horror File” merits further analysis in a separate article, especially to address Rand’s response to readers who craved a “good news” feature.

Almost every issue of Rand’s periodicals carried an installment of “The Objectivist Calendar.” For those interested in the history of the Objectivist movement, these entries provide a unique glimpse into the ways an intellectual movement spreads and grows in influence. Month by month, calendar items chronicle the activities of Objectivism’s spokesmen — their books (including sales figures), articles, columns, speeches, seminars, media appearances, courses of instruction — and a stream of events and activities by other individuals, all reflecting in some form a recognition of Objectivism as a cultural force. Reading through the periodicals chronologically, one gets the feeling of living through those heady years when Ayn Rand’s radical new philosophy was beginning to penetrate an intellectually bankrupt culture.

The best source of information on the creation and development of these publications is a lecture by Shoshana Milgram titled “Fifty Years Since the First Objectivist Periodical: Objectivism as a Philosophy for Living on Earth,” delivered at a 2012 Objectivist summer conference and available for purchase at the Ayn Rand Institute eStore.9