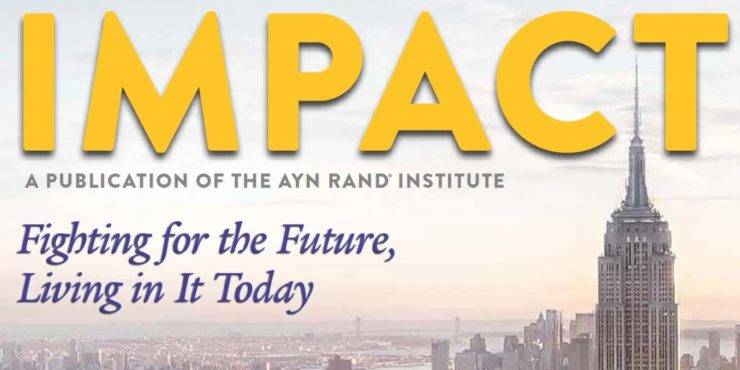 Fuel the Fight for Reason, Individualism and Freedom

In the Ayn Rand Institute’s 2019 annual report, Onkar Ghate explains how ARI is uniquely positioned to succeed in the worldwide battle for individual freedom. Alone among pro-freedom institutions, Ghate observes, ARI understands that philosophy determines long-term trends in any culture. That’s why the Institute’s activities, including New Ideal, are aimed at making a difference in the “long game,” by injecting the right philosophic ideals — reason, individualism, capitalism — into our civilization’s lifeblood. Join us. You can support our work by becoming an ARI Member.

ARI is the only institution fighting for freedom in the world today that understands this fundamental truth.

To the extent the world has moved forward since the 18th century, it has done so by implementing, however imperfectly, the ideals of the Enlightenment: reason, science, individualism and a government limited by the principle of individual rights. To the extent the world has stagnated or retrogressed, it has done so because of the ascendency of opposite philosophic ideas: mysticism, dialectical “logic” and other pseudo-scientific approaches, collectivism/tribalism, and unlimited government given the power to sacrifice the property and lives of individuals, when doing so is said to be in the “public interest.”

Rand viewed her new philosophy, Objectivism, as putting the Enlightenment’s ideals for the first time on a fully rational, fully defensible foundation.
Philosophy and much of the wider intellectual world turned against the Enlightenment in the 19th century, which is why the 20th century was not just a century of progress, but also one of widescale conflict, destruction and murder.

Rand viewed her new philosophy, Objectivism, as putting the Enlightenment’s ideals for the first time on a fully rational, fully defensible foundation.

ARI exists to inject that philosophy into the lifeblood of civilization. The Institute’s progress, accordingly, is not measured in days, but in decades. Perhaps the clearest sign of progress is that Rand’s ideas are following a trajectory similar to what J.B.S. Haldane outlined for the acceptance of radical ideas: first the idea is dismissed as worthless nonsense; then it is regarded as an interesting but perverse point of view; then it is regarded as true but unimportant; then it is said to have been everyone’s viewpoint all along. Arguably, we have moved into the second stage, as evidenced by the growing worldwide interest in Rand’s ideas, by how often her ideas are mentioned in the media and in ideological discussions, and by the growing difficulty of simply dismissing her ideas as nonsense.

This change over the last thirty-plus years is in large part due to ARI’s activities: our essay contests, books to teachers program, educational talks, conferences and courses, media appearances, and published essays and books. We are trying to change people’s fundamental convictions and to normalize discussion of Rand’s radical ideas.

Our focus on the long-range dissemination of philosophic ideas does not mean there are no shorter-term successes. But it does mean that these successes are created through the impact we have on other individuals and organizations. For instance, one of ARI’s long-standing, vital activities is educating individuals about Rand’s ideas and their application. Many of these individuals go on to do impactful work. We have helped train individuals who are now teaching and publishing at universities, are involved with legal think tanks like the Pacific Legal Foundation, the Institute for Justice, and the Center for the Protection of Intellectual Property, and have founded organizations like the Center for Industrial Progress and Higher Ground Education. We need thousands more individuals like these who are knowledgeable about Rand’s ideas and are working to apply them to forge a new culture.

It’s an exciting journey, in which I hope you join us. If you already have, thank you for your support.

Become a member of the Ayn Rand Institute, starting at $10 per month, by December 31, and receive an invitation to an exclusive online Q&A session with New Ideal writers.