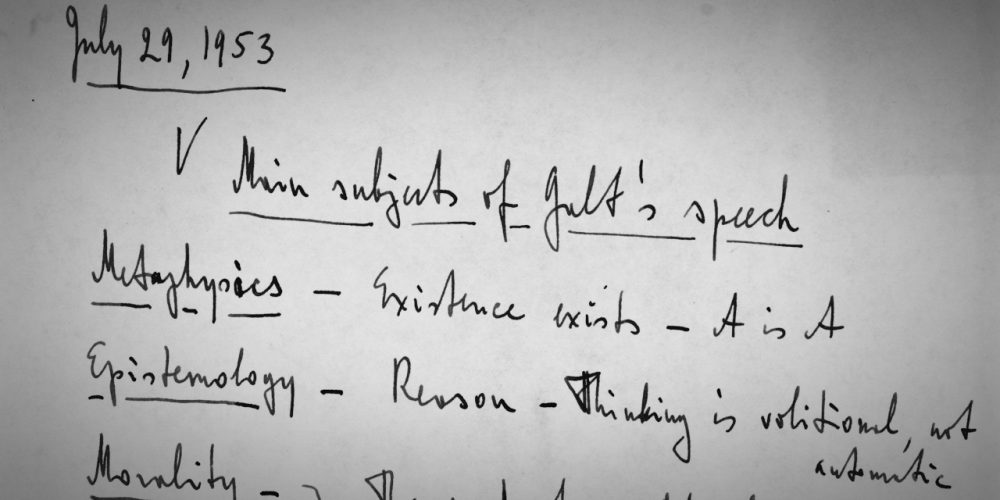 A glimpse of important manuscripts from the Ayn Rand Archives.

October 10, 2017, was the 60th anniversary of the publication of Atlas Shrugged by Ayn Rand. To commemorate that event, Jeff Britting, archivist of the Ayn Rand Archives, presented an online version of “The Ideas of Atlas Shrugged,” one of the many exhibits he has curated over the years, this one devoted to Rand’s handwritten notes and drafts for the novel. The following is an edited selection from the online exhibit, which was first presented in analog form in 2007 at the Frances Howard Goldwyn Hollywood Regional Library in Los Angeles. Britting’s commentary draws upon his research for Ayn Rand, the illustrated biography he published in 2004.

Warning: Plot spoilers ahead. Also, the manuscript pages on display here contain Rand’s provisional statements of ideas presented out of their original context. The definitive statement of Rand’s ideas can be found in the many books, essays and periodicals that she published (or approved) during her lifetime. Transcripts of Rand’s handwriting prepared by digital archivist Audra Hilse.

Ayn Rand described the theme of Atlas Shrugged as “the role of the mind in man’s existence—and, as a corollary, the demonstration of a new moral philosophy: the morality of rational self-interest.” The idea for the novel occurred to her in 1943, while discussing the philosophy of The Fountainhead with an acquaintance who insisted that Rand should enlighten her readers with a nonfiction version of her ethical philosophy. Rand countered she had no interest in such a project because any attentive reader of her fiction would understand her case. But when the acquaintance insisted that Rand had a moral duty to write a treatise because people needed it, Rand became indignant, wondering aloud: “What if I went on strike? What if all the creative minds of the world went on strike?” That, she said, would make a good novel. After the phone call ended, Rand’s husband, Frank O’Connor, who had heard Rand’s side of the conversation, turned to her and said: “It would make a good novel.”

Rand thought that her novel about “the mind on strike” would be a relatively short work dealing with economics, and that it would “illustrate [The Fountainhead’s] philosophy in action [and] merely show that capitalism and the proper economics rest on the mind.” But as she further examined the mind’s role in human existence, the scope of the novel expanded. Eventually, the finished novel integrated a wide range of topics, including metaphysics, politics, and romantic love. She thought the novel would require two years to write; instead, it took fourteen years. The Fountainhead, as she later put it, was merely an overture to Atlas Shrugged.

The story of Atlas Shrugged concerns men and women of ability in all fields, who are oppressed by a collectivist world that refuses to recognize their value. The background is modern industrial civilization. When the story opens, New York City is crumbling, and living conditions are getting worse. The world’s generator is running low, but no one knows why. Against this backdrop, Rand would present and dramatize her entire philosophy.

The manuscript pages on display here cover a period of twelve years. They include the earliest written notes on the novel (January 1, 1945) and the final handwritten page of the novel (March 20, 1957). These selections contain some of the earliest extant pages of the manuscript. What emerges from these selections is the breadth of Ayn Rand’s philosophical thinking. Those familiar with the published novel will find many recognizable ideas in earlier forms. Those unfamiliar with Atlas Shrugged will find an indication of the novel’s philosophical scope and literary means.

From the earliest extant notes stating the theme and meaning of “The Strike,” the original title of Atlas Shrugged.

In the 1940s, strikes initiated by organized labor were a well-known tactic of the American liberal left.

Rand thought that it would be both dramatic and ironic to present a strike by industrialists—the “prime movers”—against a moral code that branded them as evil exploiters. Eventually, Rand dropped the original title, “The Strike,” as too journalistic sounding, and because it “gave away too much” of the plot.

Theme:     What happens to the world when the Prime Movers go on strike.

This means – a picture of the world with its motor cut off. Show: what, how, why. The specific steps and incidents – in terms of persons, their spirits, motives, psychology and actions – and, secondarily, proceeding from persons, in terms of history, society and the world.

The theme requires: to show who are the prime movers and why, how they function. Who are their enemies and why, what are the motives behind the hatred for and the enslavement of the prime movers; the nature of the obstacles placed in their way, and the reasons for it.

This last paragraph is contained entirely in “The Fountainhead.” Roark and Toohey are the complete

The opening page of the novel is dated September 2, 1946. The expression “Who is John Galt?”—which occurs throughout the novel—evokes the despair and futility of a world in decline.

Rand wrote her fiction in longhand. After a typist created a typescript of each sequence, Rand made further revisions by hand. Of the more than twelve thousand pages contained in the final handwritten manuscript, she estimated that each page was rewritten, on average, five times.

The light was ebbing, and Eddie Willers could not distinguish the bum’s face. The bum had said it simply, without expression. But from the sunset far at the end of the street, yellow glints caught his eyes, and the eyes looked straight at Eddie Willers, mocking and still; as if the question had been addressed to the causeless uneasiness within him.

From an early draft of the novel—this page of dialogue dramatizes both the theme of the novel and Rand’s final title. Hank Rearden, an industrialist struggling under the world’s moral code, listens to Francisco d’Anconia, a former copper magnate. The decision to “shrug,” and thereby let the world fall, requires a moral sanction—a sanction permitted by a radical, new code of morality. Rearden’s discovery of this new morality is dramatized in the remainder of the novel.

“Mr. Rearden,” said Francisco, his voice solemnly calm, “if you saw Atlas, the giant who holds the world on his shoulders, if you saw that he stood, blood running down his chest, his knees buckling, his arms trembling but still trying to hold the world aloft with his last strength, and the greater his effort the heavier the world bore down upon his shoulders – what would you tell him to do?”

This note outlines the main subjects of Galt’s speech, a 35,000-word summary of Rand’s philosophy and its morality of life. The outline here covers four branches of philosophy: Metaphysics (the nature of reality); Epistemology (the nature of knowledge and its validation); Ethics (the good); Politics (the nature of a proper social system). She also lists economics, which is not a branch of philosophy. In his speech Galt explains the moral foundations of a capitalist economic system.

Rand’s defense of the prime movers “required that she formulate her own views on numerous philosophical issues, including the origin of values, the nature of volition, the law of identity as the bridge between metaphysics and epistemology, the finitude of space and time, and the nature of universals. When a philosophical issue arose during the writing of the novel, she would think about it for several days and then, in one or two attempts, resolve the problem.” (Ayn Rand, by Jeff Britting, 2004)

Metaphysics – Existence exists – A is A

Economics
(the unearned)
(the gift of inventors)

This 1957 page is Rand’s last and final handwritten page of the novel. The work had taken almost fourteen years to complete. As to Ayn Rand’s personal reaction to completing the final page of the manuscript, she recounts:“I was too dazed, in a way, to remember anything except walking into the kitchen and Frank [O’Connor] was there, and I held the last page, with the words “The End” and the date on it.”

There was only a void of darkness and rock, but the darkness was hiding the ruins of a continent: the roofless homes, the rusting tractors, the lightless streets, the abandoned rail. But far in the distance, on the edge of the earth, a small flame was waving in the wind, the defiant and stubborn flame of Wyatt’s torch, twisting, being torn and regaining its hold, not to be uprooted or extinguished. It seemed to be calling and waiting for the words John Galt was now to pronounce.

“The road is cleared,” said Galt. “We are going back to the world.”

He raised his hand and over the desolate earth he traced in space the sign of the dollar.

After the publication of Atlas Shrugged in 1957, Rand devoted her life to writing nonfiction, explaining her philosophy and its applications to the culture and current events. Rand directed her effort towards human beings and their need of “a philosophy for living on earth,” as in this passage from her essay “Philosophy and Sense of Life”:

Objectivism, as she explained it in her first Los Angeles Times column in 1962, advocates reality, reason, self-interest, and capitalism. “Reality,” she wrote, “exists as an objective absolute—facts are facts, independent of man’s feelings, wishes, hopes or fears.” Reason is man’s only source of knowledge and guide to action, and his basic means of survival. Survival requires an ethics of rational self-interest, where every man “must exist for his own sake, neither sacrificing himself to others nor sacrificing others to himself.” Politically, this requires laissez-faire capitalism, a complete separation of government and economics, where the only purpose of government is to protect man’s individual rights. In esthetics, she wrote elsewhere, art is a concretization of “metaphysical abstractions,” and she defined a theory of “Romantic Realism.”

2002 “Ayn Rand and The King of Kings”
The Ayn Rand Institute
Irvine, CA

Jeff Britting, author of the illustrated biography Ayn Rand, is the physical and analog archivist for the Ayn Rand Archives.