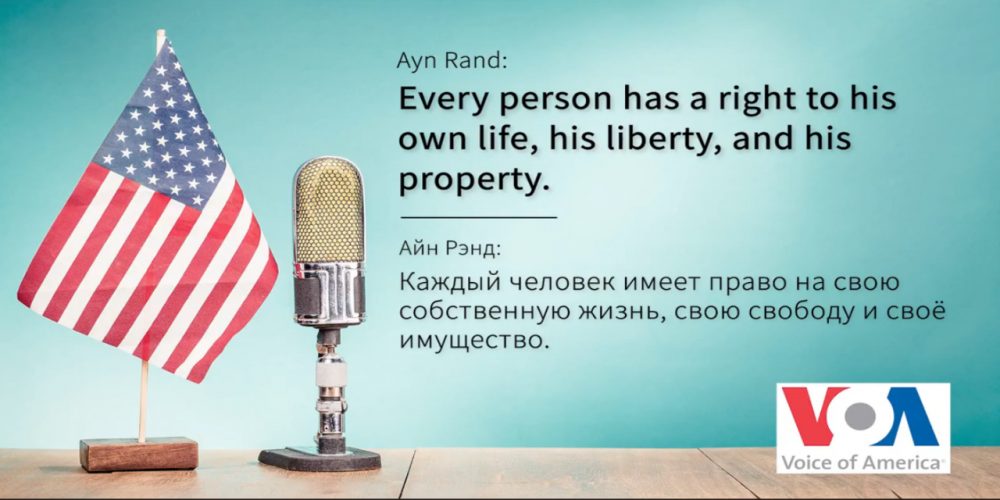 ARI members can hear Rand interviewed in Russian on the Voice of America.

Ayn Rand escaped from Soviet Russia in 1926 and would never return. But she did not forget the country in which she witnessed firsthand the horrors of communism. In 1968, she was given the opportunity to send a radio message back to Russia, when the Voice of America interviewed her in her native tongue.

On October 29, 2022, ARI members have a unique opportunity to hear the full fourteen-minute interview in Russian with English subtitles. (A five-minute segment of the full interview was originally played at OCON 2022 in Washington, DC, this past summer). The recording is being prepared for public release on YouTube where Russian speakers will again hear Ayn Rand’s voice, but we’re saving the premiere for our donors.

The event will take place on October 29, 2022, at 1:00 p.m. eastern time / 10:00 a.m. Pacific time on Zoom. I will be joined by Gena Gorlin, who helped translate the full interview, and Shoshana Milgram, who will help us understand the biographical and historical context in which it was recorded.

In our conversation, we’ll discuss not just the content and form of Rand’s interview, but its significance as a historical artifact and its enduring relevance to Russian speakers today. Following a Q&A, we will have breakout rooms for informal chat, hosted by several of our scholars and staff members.

If you want to attend this unique event as well as other events in the future, consider becoming a member. Membership details are here.