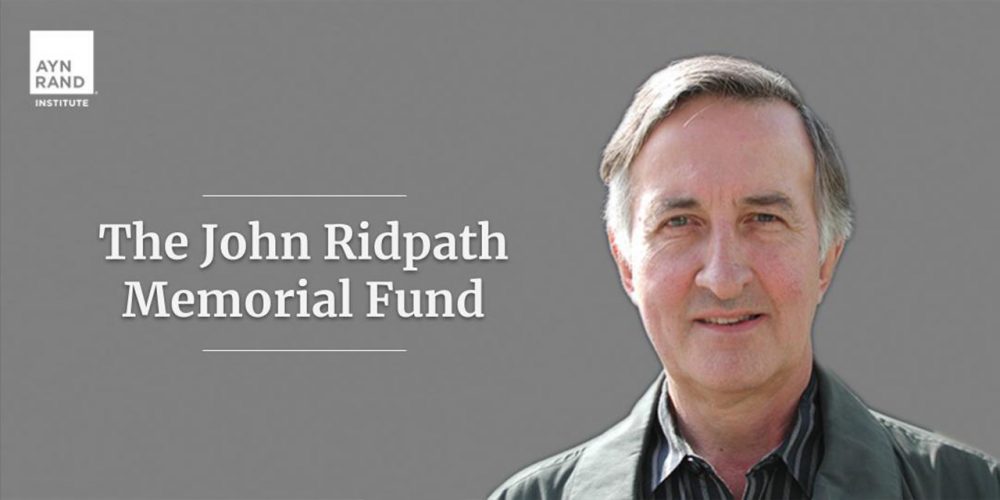 In honor of John B. Ridpath, the long-time Objectivist lecturer and ARI board member who passed away in March, a scholarship fund has been established to support students of Objectivism.

“The John Ridpath Memorial Fund was established in cooperation with Dr. Ridpath’s family,” said Elan Journo, who announced its creation at a recent ARI Roundtable devoted to personal remembrances and tributes from friends and family. “The Fund’s purpose is to provide scholarships for individuals to attend conferences on Ayn Rand’s ideas and to study at ARI’s Objectivist Academic Center, where they can get in-depth education from experts on Rand’s philosophy.”

The Fund’s goal dovetails with Ridpath’s passion for bringing Rand’s ideas to new generations. “A prolific lecturer and speaker, Dr. Ridpath spoke at many Objectivist conferences and took part in high profile debates,” Journo said. During his career at York University, he inspired young minds. “At the Roundtable, one story about his university teaching really stood out. His classes were so popular that, according to the university’s president, students who weren’t registered for his class sometimes sneaked into an already full auditorium to hear his lectures.”

Because teaching and the study of Objectivism were among Ridpath’s major values, his family and ARI chose to honor his memory by creating a fund that will ensure promising students are able to learn about Rand’s philosophy through ARI programs, conferences, and the Objectivist Academic Center.

Those who wish to honor Ridpath’s memory and support the philosophy he was passionate about advancing can contribute by visiting aynrand.org/donate and indicating “John Ridpath Memorial Fund” in the comment section. More information is available by emailing donorservices@aynrand.org or calling ARI at 949-222-6550, ext. 204.