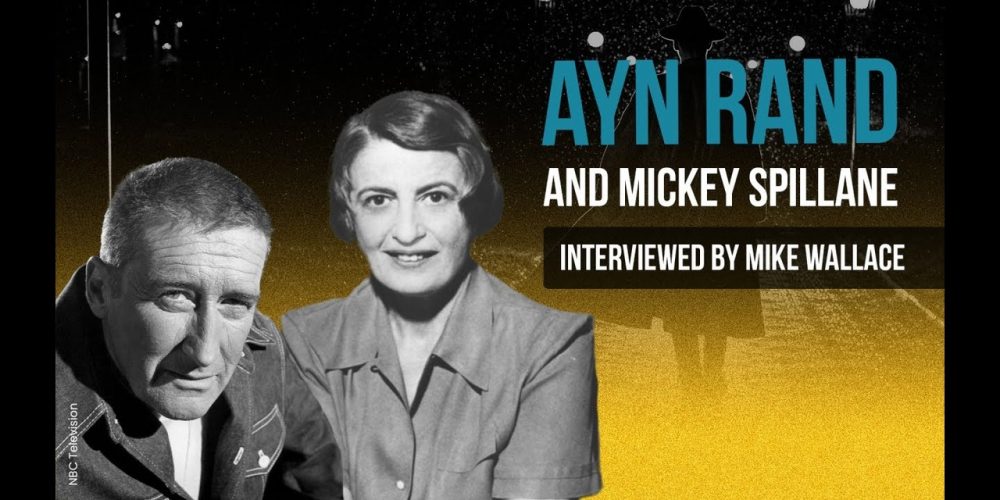 Rand explains what her heroes have in common with Spillane’s Mike Hammer.

We are happy to announce that ARI has released a 1961 interview with Ayn Rand and Mickey Spillane, conducted by Mike Wallace. This interview had been unavailable to the general public for decades.

What makes a hero? Why did Rand and Spillane become writers? Why are both authors – despite vicious attacks from critics – so appealing to the public? These are some of the questions asked by Wallace in this unique and rare interview.

The interview has been published on The Ayn Rand Institute Live! podcast. You can also listen to it on YouTube:

Spillane was a crime novelist and best-selling author, mostly known for his detective stories series about fictional character Mike Hammer with I, the Jury as the first in the series, published in 1947. He was especially famous and successful from late 1940s to 1960s.

If you are interested in how Rand and Spillane found themselves on the same stage, watch Elan Journo and Tom Bowden in their “Behind the Scenes” conversation where they discuss, among other topics:

The Spillane-Rand interview is the latest in a series of media featuring Ayn Rand that ARI has worked hard to secure the rights to host online. Previous releases include three interviews (1, 2, 3) with Johnny Carson, one with James McConnell, and the original Mike Wallace interview. We are working on securing the rights to even more interviews: stay tuned.