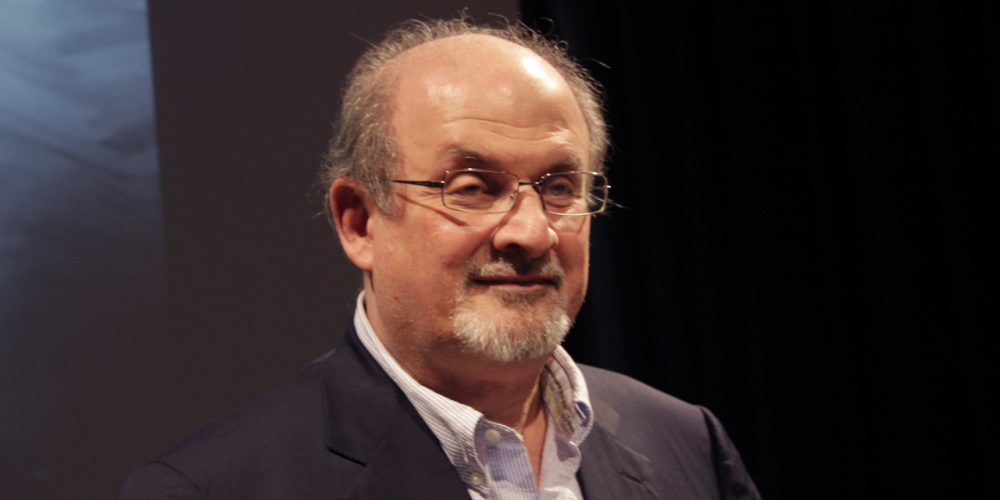 For thirty-three years we have been advocating for strong measures to address religious terrorism emanating from Iran.

Following news that author Salman Rushdie has been attacked on stage in Chautauqua, New York, here is the Ayn Rand Institute’s statement upholding the principle of freedom of speech and denouncing the 1989 Iranian death-decree against Rushdie. This article first appeared as a full-page advertisement in the New York Times in 1989.

Ayatollah Khomeni’s attack on Salman Rushdie and his publishers represents religious terrorism. Americans oppose the Ayatollah’s death-decree, but our government is doing nothing to combat it.

President George H.W. Bush has issued a limp condemnation coupled with the vague statement that Iran would be held “accountable” if American interests are harmed. But two California bookstores have already been bombed, a New York weekly newspaper has been demolished by firebombing, at least 178 threats of death or destruction have been received by booksellers nationwide, major American publishers (primarily Viking) are barricaded at ruinous cost behind an army of private security guards — and every American author, speaker, and reader must wonder if and when he will become a target of armed Islamic fundamentalists with orders to kill heretics.

Has Bush become the new Jimmy Carter? Carter wrung his hands and did nothing while Iran held Americans hostage. This time Iran is attempting to hold our minds hostage.

A religious motive does not excuse murder, it makes the crime more dangerous. It took the West centuries to move from medieval mysticism to the Enlightenment, and thereby discover the only safeguard against endless, bloody, religious warfare: the recognition of man’s inalienable right to think and speak as he chooses. Civilization depends on reason; freedom means the freedom to think, then act accordingly; the rights of free speech and a free press implement the sovereignty of reason over brute force. If civilized existence is to be possible, the right of the individual to exercise his rational faculty must be inviolable.

The ultimate target of the Ayatollah, as of all mystics, is not a particular “blasphemy,” but reason itself, along with its cultural and political expressions: science, the Industrial Revolution, the American Revolution. If the assault succeeds, the result will be an Age of Unreason — a new Dark Ages. As Ayn Rand wrote in Philosophy: Who Needs It, in her prescient 1960 essay “Faith and Force: The Destroyers of the Modern World”:

The conflict of reason versus mysticism is the issue of life or death — of freedom or slavery — of progress or stagnant brutality. . . . Reason is the only objective means of communication and of understanding among men; when men deal with one another by means of reason, reality is their objective standard and frame of reference. But when men claim to possess supernatural means of knowledge, no persuasion, communication or understanding is possible.

Many people have denounced the Ayatollah’s threats, but have then undercut their own stand by offering apologies to those whose “sensibilities” the book has “offended.” No apology is necessary. No creed, Islamic or otherwise, which leads to “holy terror” can demand respect from civilized men.

Whether Rushdie’s book in particular is good or evil, noble or depraved, is now irrelevant. Once death is threatened, there is only one issue to discuss and defend: an individual’s right to speak, whether anyone or everyone likes what he says or not. “Blasphemy” violates no one’s rights. Those who feel insulted do not have to listen to or read the insults. In defending religious liberty, Jefferson observed that “the operations of the mind” must not be made “subject to the coercion of the laws,” adding:

The legitimate powers of government extend to such acts only as are injurious to others. But it does me no injury for my neighbor to say there are twenty gods, or no God. It neither picks my pocket nor breaks my leg.

If blasphemy is the issue, we submit that a religious dictator inciting murder is blasphemy against the sanctity of human life. It is said that Rushdie’s book impugns the faith of believers. So does science. It is said that the book is offensive to the values of the Ayatollah’s followers. So is the United States of America.

Why has the outrage felt by the American public not been translated into a call for action against Iran? The protests from both the Right and the Left in this country ring hollow because both groups have betrayed the philosophic ideas necessary to act.

Conservatives have become dominated by religionists, who openly base their views on mystical dogma and want the government to impose their dogmas by force which is just what the Ayatollah is doing. Homegrown fundamentalists are in no position to lead a crusade for free thought. Can these groups maintain that it is wrong to ban Rushdie, but right to ban Darwin?

All of us owe a debt of gratitude to liberal groups like PEN and the Author’s Guild for their courageous condemnation of the Ayatollah’s threats. But these groups do not offer principled opposition, either — because of their philosophic commitment to collectivism and cultural relativism. Liberals characteristically hold that individual rights must be sacrificed to the “public good,” and that Western civilization is no better than the “culture” of tribal savages. Those who counsel appeasement as a principle of foreign policy will not and cannot demand action against the Ayatollah.

The response of many commentators has been to place the blame, incredibly, on American businessmen: in particular, on the booksellers, such as Waldenbooks, who are damned for trying to protect the safety of their employees and customers. It is not the responsibility of private citizens to risk their lives in defying a foreign power when our government, whose duty it is to protect our lives, turns a blind eye on an historic crime.

Terrorism unpunished is terrorism emboldened. The Ayatollah has already broadened his attacks; he is now threatening death to anyone who criticizes Islam. If he is not stopped, who can predict where the next threat to our publishers and bookstores will come from? From Palestinian terrorists offended by a pro-Israeli book? From the kind of anti-abortion or animal-rights groups that now bomb clinics or trash research laboratories? Do we want a country in which people are afraid to walk into bookstores, because raids on such stores have become an uncontested form of protest?

The clear and present danger is that writers and publishers will begin, as a desperate measure of self-defense, to practice self-censorship — to speak, write, and publish with the implicit thought in mind: “What group will this offend and to what acts of aggression will I then be vulnerable?” The result would be the death of the First Amendment and the gradual Finlandization of America. Is the land of the free and the home of the brave to become the land of the bland and the home of the fearful?

In contrast to both the religious right and the relativist left, [we] uphold the necessity for government action in the present crisis — government action to protect the rights of Americans to their lives, safety, and freedom. A nation that allows the agents of a foreign power to terrorize its citizens with impunity on their own soil has lost the will to survive.

We call for three specific actions:

(1) Police and other government security protection must be given on request to any publisher, bookstore, or other victim who has received a demonstrable threat in connection with the Rushdie affair. It is a monstrous injustice for such victims to be bled dry by security costs while the government neglects its proper duty.

(2) In light of the Ayatollah’s decree and the record of his followers, their incitement to murder constitutes a criminal act, which must be punished. If the inciters are foreign nationals, they should be deported.

(3) The United States government (alone or with allies) should take military action against Iran, until the Iranian government rescinds the Ayatollah’s death decree. The Ayatollah’s threat against American lives is an act of war. It calls for reprisals. Targets should include the known training camps where Iranian terrorists are being schooled and bred.

Force used in self-defense, retaliatory force striking back at those who initiate violence, is a moral necessity. To adopt a pacifist stance — or to engage in infinite behind-the-scenes “negotiations” that lead nowhere — is to surrender the world to brutality. Timid half-measures are worse than none; one does not respond to murder merely by withdrawing ambassadors or cutting back on trade. One cannot appeal to reason in dealing with those who reject it. Force is the only language intelligible to those who live by force.

The only life the Ayatollah has a right to declare forfeit is his own.