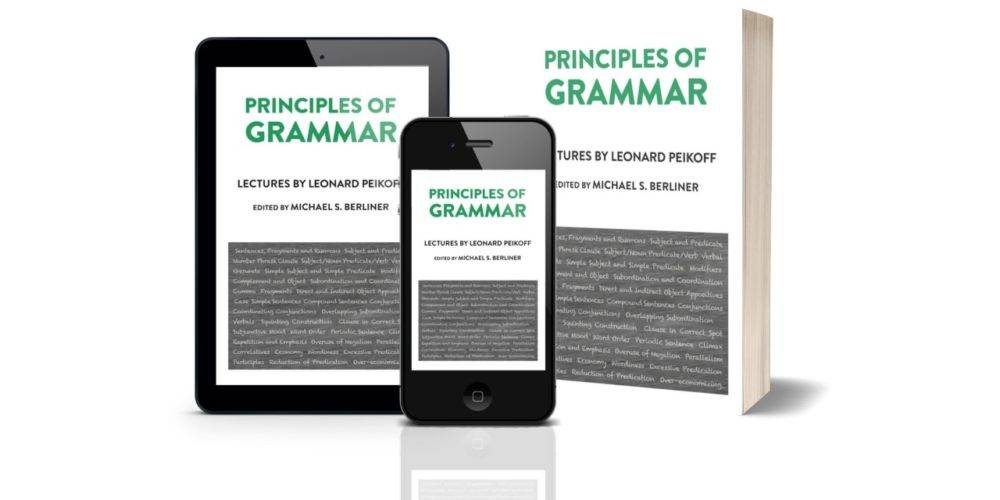 Rescuing Grammar from the Pedants

According to George Orwell, grammar and syntax “are of no importance as long as one makes one’s meaning clear.” To this widespread view, author Leonard Peikoff has a ready answer: “Grammar is the means of making your meaning clear.”

Confusion about grammar’s usefulness is not surprising given how the subject is typically taught, as a set of disconnected rules to be obeyed unthinkingly or else dispensed with at whim. But what if there are good reasons behind many of the rules, reasons that make it easier to use the rules intelligently? That might motivate us to revisit the subject — or grapple with it for the first time — in search of techniques to improve our writing.

Principles of Grammar is a new book by Leonard Peikoff based on lectures and student exercises from his 1981 live course, expertly but lightly edited by Michael S. Berliner. Peikoff, who is a philosopher by profession, maintains that the source of grammar’s authority is neither tradition nor social convention but immutable facts about the human mind.

Grammar, Peikoff says, is the science that studies the methods of combining concepts into sentences that clearly express a writer’s thoughts. This essential purpose supplies an objective means of judging grammatical rules: “The basic standard of right and wrong for grammar comes down to clarity, in essence, which means reference to reality. Is this rule required by the nature of thought in order to make your relationship of concepts clear, in order to make it exact, in order to designate something specific in reality?”

“The basic standard of right and wrong for grammar comes down to clarity, in essence, which means reference to reality.”
As an example of how grammatical rules facilitate clear thinking, consider Peikoff’s discussion of punctuation. Its usefulness, he explains, springs in part from a fact about the human mind: we can’t retain more than a few items in conscious awareness at any given time. That’s an insight called the “crow epistemology” (named after scientific experiments observing similar limits in animals and drawn from Ayn Rand’s theory of knowledge). Periods, commas, dashes and other visual signals allow writers to create distinct “units” of thought from an otherwise unintelligible mass of words. Discussing the comma as a tool of thought, Peikoff clarifies such thorny, perennial problems as how to punctuate restrictive and nonrestrictive clauses, and whether to use the serial comma (also known as the “Oxford comma”).

Peikoff wants writers to understand how their grammatical choices will affect readers. Misplaced modifiers, for example, can bring the reader to a full stop, laughing: “He put the ring on her finger with a smile that he had bought at Tiffany’s.” To take another example, violating the rules of subordination can prevent a writer from conveying which thoughts are most important. Peikoff discusses two related errors. One is the failure to subordinate when one’s message requires it: “The student failed the exam. He became a general later.” Another error is false subordination: “The Senator rose to his feet, announcing World War III.”

By grasping the reasons behind grammatical rules, Peikoff argues, one can intelligently resolve dubious or controversial cases rather than unthinkingly cling to established rules. Noting that there are optional elements in all areas of grammar, Peikoff provides clarifying advice on dealing with grammatical trends such as the gradual disappearance of distinctions between “who” and “whom.” “You don’t have to rely helplessly on authorities,” he says, when you are guided by the principles of grammar.

Peikoff’s style is spontaneous and entertaining. He provides clear definitions of all terms. He employs lots of real-life examples, many humorous, to illustrate his points. He assigns exercises and gives careful, detailed explanations of the answers. The book is an illuminating discussion of the valuable rules you should have been properly taught in high school, plus some new topics (“fearful subjective” and “squinting construction,” anyone?).

If your appreciation for grammar has been ruined by pedantry, Principles of Grammar offers a refreshing antidote.