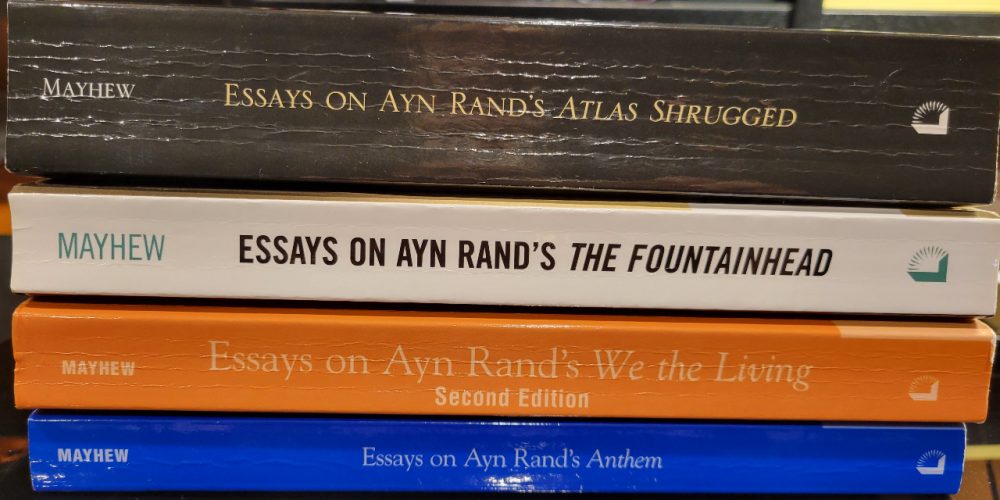 Ayn Rand’s Atlas Shrugged was published on October 10, 1957. As the sixty-fifth anniversary approaches, the editors are pleased to republish this item from 2017.

Today is October 10, 2017, the sixtieth anniversary of the publication of Ayn Rand’s Atlas Shrugged. All this year we’ve been showcasing some of the authors who contributed chapters to Essays on Ayn Rand’s “Atlas Shrugged,” and now it’s time to speak with the editor of that volume himself. These are Robert Mayhew’s remarks on the genesis of the four-volume series that he edited, examining Rand’s novels We the Living, Anthem, The Fountainhead and Atlas Shrugged.

“There were five factors that motivated my wanting to publish a collection of essays on We the Living and then a series on all the novels,” Mayhew recalls. “I’m not sure which came first, and likely many were simultaneous, but they seemed to come together in the early 2000s. First, I wanted to write a scholarly essay on the two versions of We the Living, and I didn’t think I could publish it in a scholarly journal. Second, my good friend Tore Boeckmann was doing truly excellent and original work in literary esthetics, and I thought he needed a vehicle for its publication besides taped courses and lectures, and again I doubted he’d have success in academic journals. I didn’t ask Tore about this; I just thought it. In the end, he wasn’t interested in writing anything on We the Living, though he did contribute five essays to the other volumes. To mention a couple of my favorites: His essay on Aristotle’s Poetics and The Fountainhead is superb, and I have a special fondness for his ‘Anthem as a Psychological Fantasy,’ which includes a wonderful comparison of Anthem and Ibsen’s Peer Gynt.

“Third, we had reached the point in the development of the Objectivist movement where there were a number of qualified potential contributors to collections of essays on Ayn Rand’s novels, so much so that even if a few people said no, there would be a sufficient number in the end. I should add that it was especially important that there be enough qualified people to write on philosophical themes, and there were — for instance, Tara Smith, Onkar Ghate, Darryl Wright and Greg Salmieri each contributed multiple essays to these collections.

“Fourth, the Ayn Rand Archives was by then thriving, which made possible the kind of collection I had in mind for We the Living — one with a focus on the history of the novel, as well as esthetic and philosophical issues. In this connection, I should mention the important essays by Shoshana Milgram on the evolution of the drafts of the novels. Finally, despite my doubts about academic journals as publishing outlets for Objectivists, I did think Ayn Rand had become enough of a cultural phenomenon that at least a second- or third-tier academic publisher would be interested in a volume on her novels. And I was right.

“As I said, this series actually began not as an idea for a series, but for one volume, on We the Living,” Mayhew notes. “But since the publisher I contacted was so enthusiastic, as were most of the contributors I approached, I quickly decided that there should be such volumes on all four novels. More than a couple of well-intentioned and intelligent Objectivists advised me to begin with the two most popular novels and not with We the Living; but the idea for a collection on that book was so fixed in my mind, I wouldn’t hear it. And I’m very happy that the series did develop in chronological order.

“I felt a great deal of freedom in editing these collections. I could solicit the essays I wanted from the people I wanted. In some cases, I had a specific person in mind for a specific topic. In others, I knew I wanted someone to write on something, and added that he or she could choose the topic. For instance, I had heard somewhere that Leonard Peikoff had a special connection to The Fountainhead, so I decided to ask him for an interview, the transcripts of which would make for a nice closer to the Fountainhead volume. He agreed, and I talked to him for over an hour about the novel. That was a memorable experience.

“In one case, for the Atlas collection, I contacted Tara Smith and told her I wanted her to write on the danger of non-objective law. She, however, wanted to write on the stark opposition of good or evil presented in the novel. I said she could write on the second topic, but I made the case for the crucial importance of the first — and why she was the perfect person to write about it. After some resistance, she agreed to write on both. That was a good result!

“Also, I had heard from Allan Gotthelf in the mid-1980s that he had made an outline of Galt’s speech, which he showed to and discussed with Ayn Rand. I asked him if he could write something about that for the Atlas collection, and he ended up contributing ‘Galt’s Speech in Five Sentences (and Forty Questions).’”

In his preface to the Atlas collection, Mayhew writes: “The preparation of this collection began, and some of the essays in it were written, in 2007, the year marking the fiftieth anniversary of the publication of Atlas Shrugged. Since its publication, the novel has never been out of print, and in the first decade of the twenty-first century it still averages sales of well over 100,000 copies a year.” Now, only ten years later, Rand’s magnum opus sells more than 200,000 copies a year, with no end to its popularity in sight.

Says Mayhew: “I’m very proud of these collections, which I think remain state of the art.”

Mayhew is professor of philosophy at Seton Hall University, where he has taught for more than two decades. His primary research interest is in ancient philosophy, and he has published several books on Aristotle, Plato and other Greeks. He also serves on the board of directors of the Ayn Rand Institute and that of the Anthem Foundation for Objectivist Scholarship. Mayhew’s Ayn Rand scholarship includes: