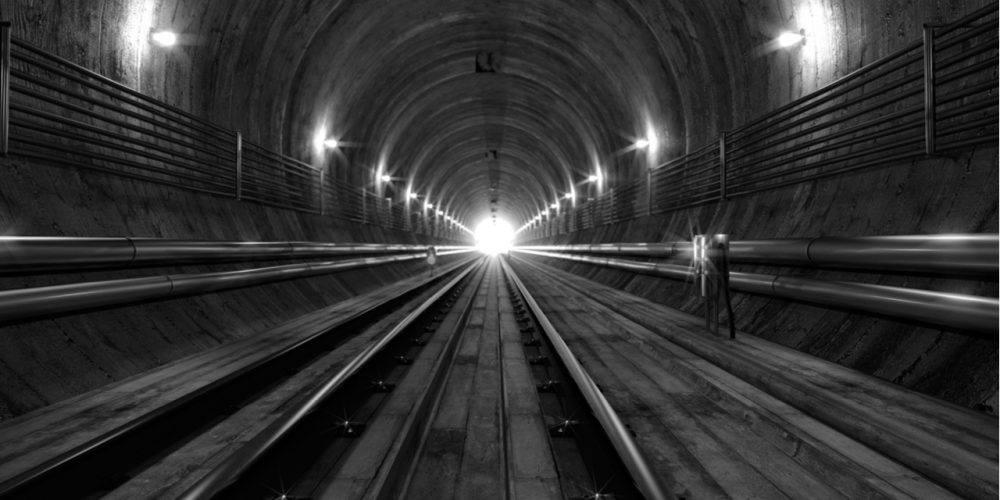 Ayn Rand’s post-apocalyptic novella Anthem is a deeply poetic story of humanity so immersed in collectivism that the very word “I” has been lost and must be rediscovered.

No men known to us could have built this place, nor the men known to our brothers who lived before us, and yet it was built by men. It was a great tunnel. Its walls were hard and smooth to the touch; it felt like stone, but it was not stone. On the ground there were long thin tracks of iron, but it was not iron; it felt smooth and cold as glass. We knelt, and we crawled forward, our hand groping along the iron line to see where it would lead. But there was an unbroken night ahead. Only the iron tracks glowed through it, straight and white, calling us to follow. But we could not follow, for we were losing the puddle of light behind us. So we turned and we crawled back, our hand on the iron line. And our heart beat in our fingertips, without reason. And then we knew.

We knew suddenly that this place was left from the Unmentionable Times. So it was true, and those Times had been, and all the wonders of those Times. Hundreds upon hundreds of years ago men knew secrets which we have lost. And we thought: “This is a foul place. They are damned who touch the things of the Unmentionable Times.” But our hand which followed the track, as we crawled, clung to the iron as if it would not leave it, as if the skin of our hand were thirsty and begging of the metal some secret fluid beating in its coldness.

We returned to the earth. International 4-8818 looked upon us and stepped back.

But we could not speak and we stood looking upon them.

They backed away, as if they dared not touch us. Then they smiled, but it was not a gay smile; it was lost and pleading. But still we could not speak.

In a primitive post-apocalyptic world mired in collectivism, men have lost the word “I.” Ayn Rand’s Anthem tells of one man’s struggle to discover what was lost. Set in an indeterminate future, its story is timeless: the independent, creative individual on a quest for truth versus a society that subordinates the individual to its demands.

Anthem is unique among Rand’s works — a fantasy, written in quasi-biblical language, more poem than novel. But in spiritual grandeur, recognizably Rand. At only eighty-nine pages, its condensed poetic power and deeply romantic story make for an incomparable experience. Find the book and immerse yourself in its world.