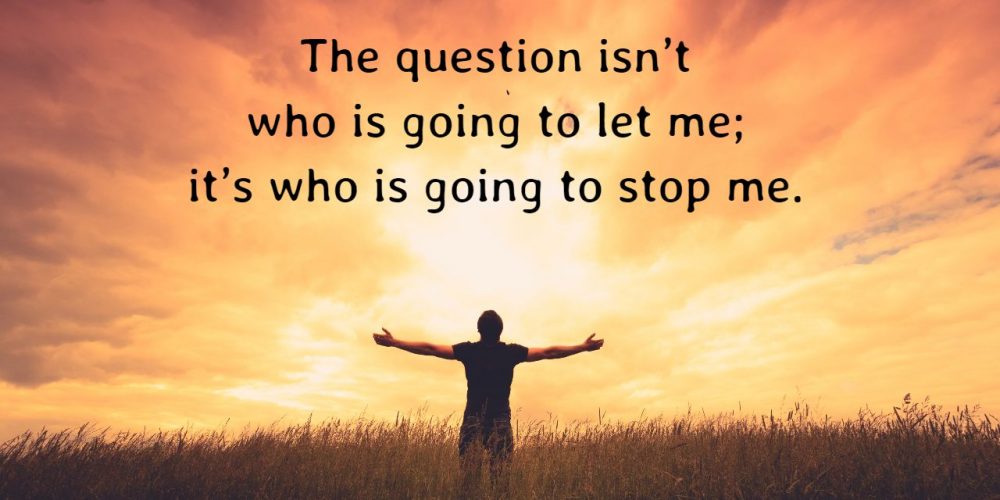 The Quotable Ayn Rand: Who Is Going to Stop Me?

The real origin and meaning of the quotation most people get slightly wrong.

Many people are inspired by the self-confident attitude these words imply. “I don’t need anyone’s permission to live my life,” the words suggest. “All I need is an unobstructed road. As long as nobody stops me, I’ll prove myself.”

Although Rand never wrote or said the exact words attributed to her, their source clearly lies in a passage from her first best seller, The Fountainhead.

The hero of that novel is Howard Roark, an architect of uncompromising integrity and utter independence. Early in the book, Roark is expelled from architectural school. The Dean calls him in for a meeting, thinking that Roark will surely plead for a second chance. When no such plea comes, the Dean begins lecturing Roark, criticizing his radically unconventional approach to architectural design.

“Every problem you were given,” the Dean went on, “every project you had to design — what did you do with it? Every one of them done in that — well, I cannot call it a style — in that incredible manner of yours. It is contrary to every principle we have tried to teach you, contrary to all established precedents and traditions of Art. You may think you are what is called a modernist, but it isn’t even that. It is . . . it is sheer insanity, if you don’t mind.”

Exasperated, the Dean points to an architectural drawing on his desk, submitted by Roark for a classroom assignment. It’s a totally modern design, in Roark’s strikingly original style — except that the assignment was to design a Renaissance villa, which Roark regarded as a useless exercise in “drawing Italian post cards.”

Here’s the key passage from the novel:

“Do you mean to tell me that you’re thinking seriously of building that way, when and if you are an architect?”

“My dear fellow, who will let you?”

“That’s not the point. The point is, who will stop me?”

As can be seen, the words that people often attribute to Ayn Rand are a well-intentioned condensation of this exchange. But taking her dialog out of context could lead to misunderstanding if the quote is thought to stand for: “I should be able to do whatever I want, because I want it, and to hell with other people.” As my colleague Ben Bayer pointed out at PolitiFact, that would be a declaration of amoralism, entirely inconsistent with the novel’s events and underlying philosophy. In context, it’s clear that what Roark wants to do, regardless of whether someone tries to stop him, is his kind of architecture.

To appreciate what Rand really had in mind, in full context, nothing beats reading the book itself. The Fountainhead is full of such dramatic passages and dialogue. Those who haven’t read the novel can find an overview of the story, its themes and its characters here. Plus, there’s a discussion-based video course available here that starts with a spoiler-free introduction and proceeds chapter by chapter.

Those who have already read The Fountainhead may enjoy this video course on ARI Campus that contains background material on Rand and the era in which she wrote, an overview of the story, an analysis of the principal characters and detailed discussion of the main themes. There’s also a book of historical, literary and philosophical essays that analyze the novel’s style, its characters’ virtues, its philosophical themes and even its use of humor. The essays make extensive use of previously unpublished material from the Ayn Rand Archives.

High school juniors and seniors may want to explore the opportunities — and cash prizes — offered by The Fountainhead essay contest.

Finally, there’s no better evidence of Ayn Rand’s “quotability” than the four-hundred-plus entries in the Ayn Rand Lexicon, always accessible using the Lexicon tab on the top menu at ARI Campus. Relative to this topic, check out the quotations on “Self-Esteem,” “Free Will,” “Happiness,” “Values,” “Ambition,” “Benevolent Universe Premise,” “Selfishness,” “Productiveness,” “Independence” and “Individualism.”