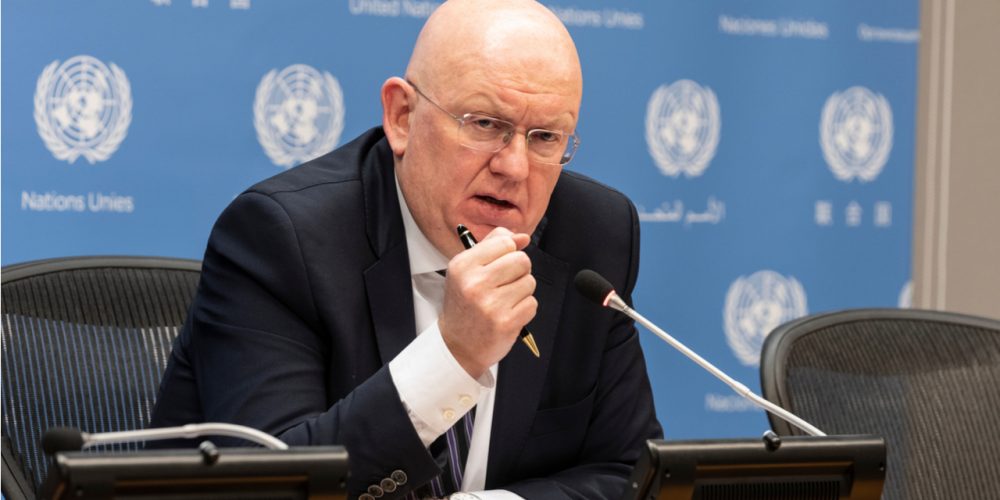 The UN empowers and whitewashes the Russian regime by design.

Russia’s invasion of Ukraine — flagrantly violating that country’s sovereignty and the rights of its people — has many wondering: Does Russia belong on the United Nations’ Security Council, or in the UN at all?

There’s debate over whether the UN Charter could allow for Russia’s expulsion. Technically, a member can be expelled by a vote of the General Assembly “upon the recommendation from the Security Council,” and only if none of the five permanent members vetoes it. And Russia, as one of those five, is bound to veto.

Overlooked in this debate is the deeper problem. Russia cannot and will not be expelled, because the UN was designed to empower, whitewash and shield it and other vicious regimes.

The UN’s stated mission is to maintain “international peace and security” and to protect freedom. And yet in 1945 Soviet Russia was designated a founding member and one of the five permanent members of the powerful Security Council (alongside the U.S., France, UK and China). This despite the USSR’s stated ambitions to overthrow free societies across the globe, despite its confiscation of private property, despite its brutal violation of rights on an unimaginable scale. Not the crushing of dissent, not the millions deliberately starved to death in Ukraine, not the gulags, not the Soviet crushing of eastern Europe. None of these nor the multitude of its other crimes was enough to preclude the USSR’s becoming or remaining a UN member.

That such a brutal regime was not only a charter member, but also that it held a permanent seat on the exalted Security Council should make anyone fundamentally question the UN’s moral stature. How is it possible that Soviet Russia held a seat next to some of the freest countries in the world?

It’s because of the UN’s policy of moral neutrality with respect to membership, putting free countries and dictatorships on par, as if they were morally equal. This gives dictatorships undeserved respectability and empowers them, as philosopher Ayn Rand has noted. By design, Soviet Russia’s UN membership provided it with moral cover, whitewashed its aggression, and shielded it from ever being kicked out.

The Russian Federation, as the successor of the USSR, now enjoys all those privileges and unearned respectability.

Putin’s Russia is an authoritarian regime moving toward dictatorship. It has worked to eradicate free speech. It has jailed, murdered and “disappeared” critics. In addition to blatantly violating the rights of its own people, Russia also exhibits a pattern of belligerence against sovereign nations. Recall Russia’s 2008 war in Georgia, the 2014 invasion of Ukraine, the annexation of Crimea, and the violent aftermath (which included the forced disappearance, torture and detention of Crimeans). Russia also enmeshed itself in the Syrian Civil War, enabling the dictatorship of Bashar al-Assad.

What has the UN done about all of this? For the most part, nothing. Occasionally, it has given Russia a slap in the wrist — which has not dissuaded Russia from continuing its imperialistic and authoritarian ambitions. Witness its latest onslaught in Ukraine.

Well before this war, Russia has used its position in the UN and the organization’s passivity to deflect from its behavior. Russia gets away with murder thanks in part to its veto power in the Security Council. It vetoes resolutions against its allies (for example, shielding the Syrian regime, despite its use of chemical weapons) and resolutions against itself, like a resolution addressing the situation in Crimea in 2014. Earlier this month, it vetoed a Security Council resolution condemning the invasion of Ukraine (the matter had to be taken to the General Assembly instead, whose resolutions are not legally binding).

The UN is the perfect environment in which a regime like Russia can thrive, get unearned respectability, force the hand of free countries, get a free pass for the atrocities it commits and run the show.

Russia is not, however, the only member that the UN whitewashes and unduly elevates. The People’s Republic of China, one of the most vicious regimes of our time, went through a similar succession process (supplanting the Republic of China) and now enjoys the same prerogatives as Russia. But it’s not only permanent members that the UN won’t kick out: members that could be expelled for violating peace and human rights, such as Cuba, Venezuela, Iran and Syria, are still members in good standing.

Decades ago, Ayn Rand observed that having Soviet Russia in the UN “really amounts to a town’s having gangsters as part of its crime-fighting committee.” The same is true today with Putin’s Russia. Fundamentally the UN is set up to empower dictators and authoritarians.

This is why Russia won’t be kicked out of the UN. But with the ample evidence of the morally corrupt nature of the UN, it’s past time for free countries to ask themselves how they can remain in an organization that enables authoritarian regimes like Russia.