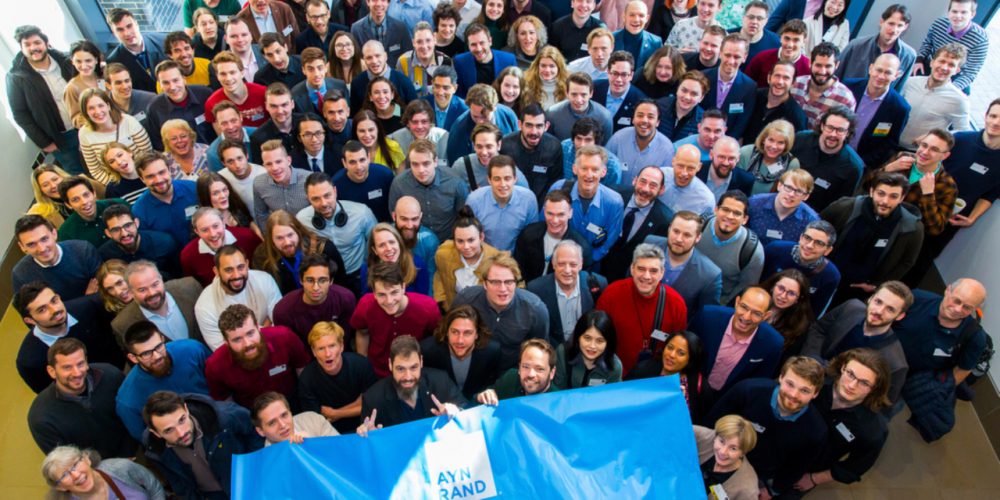 Memories and takeaways from the London conference, ARI’s return to big face-to-face events in Europe.

“It’s so great  to finally meet you in real life — you look different from Zoom!” This comment was heard everywhere at the AynRandCon that took place this last April in London, ARI’s first major in-person event in Europe after the pandemic.

The event was attended by 166 people, more than half of whom were students. They came from twenty-four countries, and some of them made the long trip from as far away as the United States. London, which is a magnificent cosmopolitan city where Covid-related restrictions had been lifted, is also home to the most active and engaging Objectivist community outside the U.S. Six ARI speakers gave talks on topics such as introductory Objectivism, free will, the evils of tribalism, and the pursuit of happiness.

The audience mix there perfectly reflected ARI’s mission. We want to offer aspiring young people with intellectual ambitions a path to understanding the philosophy of Objectivism better and a means of using it as a tool in their careers and personal lives. Often such young people start their journey by meeting people who have managed to make a career out of teaching and advocating ideas, or who have put such ideas to work in business and the professions. The mentoring sessions were among the highlights of the conference. Young people addressed questions to ARI intellectuals and to our accomplished donors and guests, who shared advice about their paths to success.

Another theme during the weekend was the buzz around Ayn Rand University, ARI’s new and expanded educational initiative. Current students shared their experiences, and future students learned more about the programs offered and their chance to study under some of the best teachers on a variety of topics and in an engaging way. Besides the young people, we had members of our community with years and decades of activity in the movement. Catching up with them and learning from their experiences in fighting for ideas and convictions we share was valuable for all of us.

Two things stood out for me as exceptionally fulfilling and rewarding for all the work we put into this conference. First was the intellectual seriousness of the young attendees. During the talks there was no scrolling on social media or drifting away; there was intellectual intensity in the atmosphere, eyes attentive, hands writing notes and questions. The other thing that stood out was the eagerness of the attendees to ask as many questions as possible of our intellectuals. The queues for the Q&A were long, and often we ran out of time, but discussion continued during breaks, lunch, and in the corridors. The social aspect of the conference was also important, as interacting with so many like-minded people after two years of restrictions and isolation provided a breath of fresh air.

AynRandCon–Europe 2022 is a beautiful memory, and we are thankful to those who made it happen, particularly our generous donors. We are already working hard for the next big Objectivist meeting in Europe: AynRandCon–2023, which will take place next April in Athens. We look forward to seeing you all there!