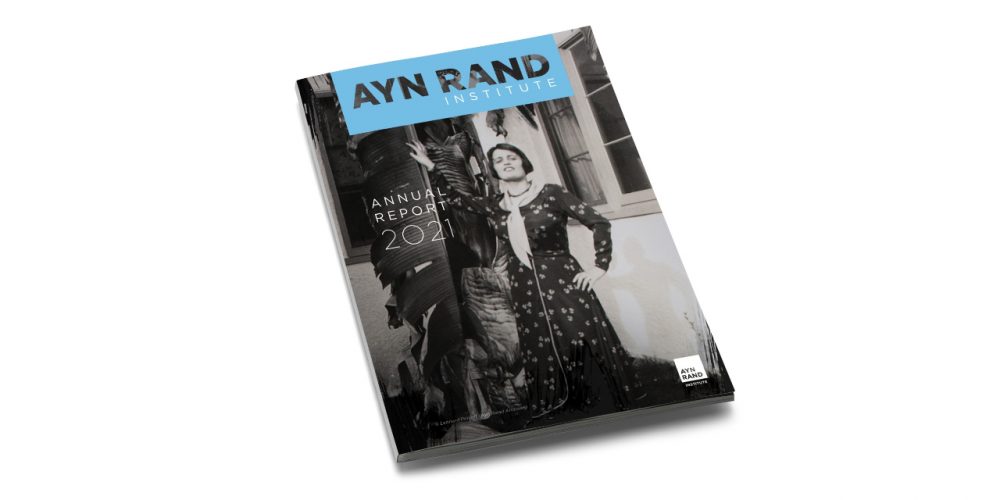 News of Ayn Rand University is featured alongside a still-timely cultural analysis by Rand.

An important article by Ayn Rand, “Credibility and Polarization,” is featured in the 2021 Annual Report of the Ayn Rand Institute. First published fifty years ago in the inaugural issue of the Ayn Rand Letter, this essay carries a timely message for a nation that is — to quote Rand — “splitting into dozens of blind, deaf, but screaming camps, each drawn together not by loyalty to an idea, but by the accident of race, age, sex, religious creed.” Rand’s solution for achieving national unity on a rational basis has never been more urgently needed.

“This has been among the most eventful years for ARI,” said CEO Tal Tsfany, “with many exciting changes and additions — including the launch of Ayn Rand University.” The new Annual Report includes a detailed description of ARU, a summary of ARI’s work with middle- and high-school students on Ayn Rand’s novels, and an in-depth discussion of Ayn Rand’s “musical biography” as showcased and explained by Michael S. Berliner, advisor to the Ayn Rand Archives and ARI’s first CEO.

“ARI’s competitive advantage is identifying and training the next generation of Objectivist intellectuals,” says Tsfany in the report’s joint message with chief philosophy officer Onkar Ghate. “ARU will take our decades of experience helping people understand and advocate Rand’s philosophy and dramatically improve and expand those efforts. We already offer the world’s best training in Objectivism — now we’re going to do it at scale.”

Donors receive a printed copy of the report delivered straight to their mailboxes, and printed copies of ARI’s new donor magazine, Ayn Rand Today, are mailed three times a year. Making a donation before the end of the year can carry tax advantages. Tap here to become a member. Meanwhile, read this year’s report online below: