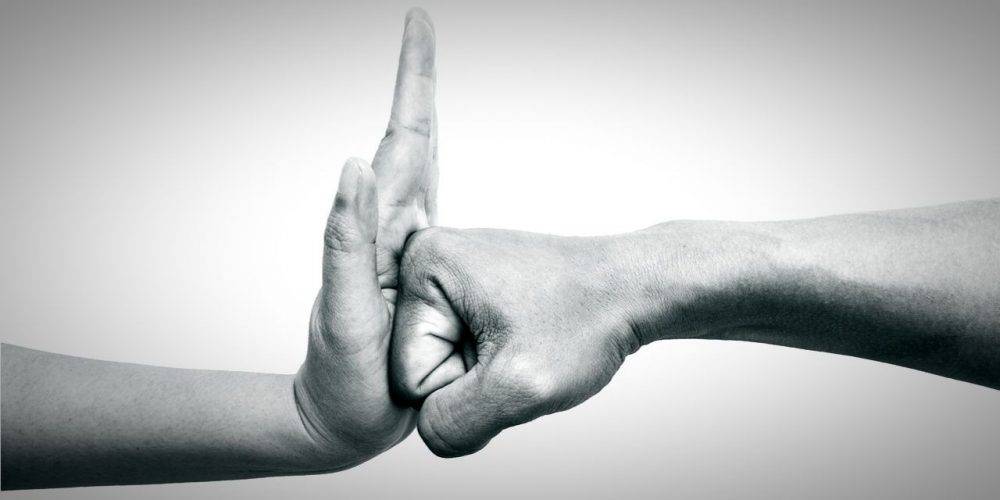 Whitewashing Coercion with the Language of Civility

Marked deterioration in our political discussions and debates has sparked bipartisan calls for a return to civility. Others defend incivility as a legitimate means of protest. But the language of “civility” and “incivility,” as it is often used in this context, blurs the crucial distinction between morally defensible protest and coercion.

Commentators across the political spectrum are noting a marked deterioration in our political discussions and debates. Citing everything from the daily barrage of unfiltered media and social media rants to the name-calling and insults tweeted by President Donald Trump to the acts of aggressively confronting politicians and public figures in their private lives, many of these commentators are calling for a return to “civility.” Others, observing the same trend, are defending “incivility” — arguing that calls for civility are merely attempts to silence the voices of aggrieved groups.

There is certainly something worrying about what passes for political debate and legitimate protest today, but the language of “civility” and “incivility,” as it is often used in this context, is part of the problem. It blurs a crucial distinction and muddies the waters.

Blurring lines and crossing them

In an article for The Atlantic, “Protest Isn’t Civil,” staff writer Vann R. Newkirk II states that “demands for civility function primarily to stifle the frustrations of those currently facing real harm.”

To support this claim, Newkirk cites two recent occasions in which individuals were publicly admonished for “incivility.” One is the incident in which Stephanie Wilkinson, the owner of the Red Hen restaurant in Lexington, Virginia, refused to serve White House press secretary Sarah Huckabee Sanders because Wilkinson was opposed to the administration’s policies, including its position against transgender people in the military. A statement by The Washington Post’s editorial board, “Let the Trump Team Eat In Peace,” criticized Wilkinson’s action as “uncivil.”

Also rebuked for “incivility” was Representative Maxine Waters. Waters was angry over family separations at the border caused by the Trump administration’s “zero-tolerance” policy and, according to Newkirk, she “endorsed Red Hen tactics as a tool for pressuring senior administration officials.” But consider what Representative Waters told a crowd of her supporters:

If you see anybody from [Trump’s] cabinet in a restaurant, in a department store, at a gasoline station, you get out and you create a crowd, and you push back on them, and you tell them they’re not welcome anymore, anywhere. [Emphasis added]

The “dangerous line” being crossed (and blurred by the language of civility) is between the peaceful exercise of one’s rights and the coercive exercise of physical force.
Saying that Waters was endorsing “Red Hen tactics” is blurring the distinction between the peaceful action of a property owner and a politician calling for the physical intimidation of government officials. Wilkinson, in her own restaurant, quietly took Sanders aside, and explained why she would like her to leave. Sanders and her party left peacefully and were not charged for their meal. Whatever you think of Wilkinson’s decision, her action was a peaceful and legitimate exercise of her rights as a property owner. You might disagree with Wilkinson’s decision — but no one’s rights were violated in the process, and she had every right to express her disapproval of the administration in that form.

Waters’s call for harassment and intimidation is in an entirely different category from Wilkinson’s action — and classifying both as “incivility” simply whitewashes the call for intimidation with a safely unintimidating term.

Observe what such physical intimidation tactics look like in practice. Watch the video of the activists who “created a crowd” around Senator Ted Cruz and his wife in a D.C. restaurant. Or the video of a crowd of activists chanting and yelling at Homeland Security Secretary Kirstjen Nielsen while she dined. Or the video of people accosting Florida attorney general Pam Bondi as she leaves a movie theater. Or the protest outside the home of Fox News host Tucker Carlson, in which a group of protesters chanted, among other things, “We know where you sleep at night.” Such acts are intimidating, and not just toward the individuals being targeted.1

Waters should be rebuked — not for “incivility,” but for advocating the use of physical intimidation for political ends. In an article for The Atlantic, “Left-Wing Protests Are Crossing the Line,” journalism professor Peter Beinart rightly warns of the danger these intimidation tactics pose.

Whatever the merits of the causes they promote, they are embracing methods that are deeply corrosive. . . . When [activists] prevail, the approaches they embraced in opposition to power deeply shape how they exercise it themselves. And the protesters harassing prominent conservatives during their private lives have crossed a dangerous line.

The “dangerous line” being crossed (and blurred by the language of civility) is between the peaceful exercise of one’s rights and the coercive exercise of physical force. That line is not just being crossed today, it is being rejected by advocates of force.

On October 6, 2018, the day of Brett Kavanaugh’s confirmation to the US Supreme Court, James Thomas, an assistant professor of sociology at the University of Mississippi, issued this tweet:

Don’t just interrupt a Senator’s meal, y’all. Put your whole damn fingers in their salads. Take their apps and distribute them to the other diners. Bring boxes and take their food home with you on the way out. They don’t deserve your civility.

Commenting on this incident in an article for Inside Higher Ed, sociology professors Johnny E. Williams and David G. Embrick defended Thomas’s statement. “Challenging senators’ decisions that adversely affect the lives of everyday people is not ‘uncivil’ or ‘aggression.’ It is democracy in action.” Going a step further than Maxine Waters, these professors not only explicitly defend a call for violence, they refuse to regard such an act even as aggressive.

Some of today’s advocates of “civility” are pointing to the nonviolent activism endorsed by Martin Luther King, Jr., during the civil rights movement as a model of civilized, peaceful protest. Commenting on this trend in his New York Times article, “White America’s Age-Old, Misguided Obsession with Civility,” Thomas J. Sugrue, a professor of history and social and cultural analysis at NYU, writes (derisively) that the theme of today’s advocates of “civility” is:

But Sugrue argues that “civil rights leaders, while they did believe in the power of nonviolence, knew that their success depended on disruption and coercion as much — sometimes more — than on dialogue and persuasion.” Likewise, Newkirk writes that “the version of Kingian nonviolent civil-rights activism used to scold those who use shame and confrontation as tools today is a false image.”

For King . . . nonviolence was militant. It was confrontational by design. Often, this sort of protest required breaking laws . . . . What King understood was that civility stood not as a companion or a near-synonym to his project of radical, militant nonviolence, but as its most insidious opponent.

To respect individual rights and the rule of law requires being fundamentally, and on principle, opposed to any kind of intimidation, threat, force, or mob action in pursuit of one’s ends.
Here again we see the language of civility used to blur the difference between speech and coercion. It is simply obfuscation to claim, as Newkirk does, that appealing to “nonviolent activism” precludes using “shame and confrontation as tools.” One can shame and confront without initiating force, as Wilkinson did at the Red Hen restaurant. Would a demand for nonviolent activism serve to scold her? No. But for Newkirk, “confrontation” is code for threats, intimidation, and coercion, which is what he is trying to legitimize.

Likewise, saying, as he does, that King’s nonviolence was “militant” and “confrontational,” and that “civility” was “[his project’s] most insidious opponent” is not clarifying either. The issue at stake here, which this language is blurring, is not whether one’s form of protest is polite or pointed, but whether or not it violates the rights of others through the use of force. An appeal to King in this regard just muddies the issue because the actions King endorsed fell on both sides of that divide.2

What Newkirk and Sugrue are trying to do is use the legacy of King’s civil rights activism to condone force and intimidation as a legitimate means of pursuing political ends.

Drawing the line between speech and force

Whatever the case may be with regard to King — and what acts he endorsed or opposed — it is essential to clearly demarcate the realm of speech and the realm of force in the context of a civilized society.

Writing during those same turbulent years of protest in the 1960s — when civil rights activists marched in the streets and clashed with police, students staged campus rebellions, and anti-Vietnam protesters lay in the streets blocking traffic with their bodies — Ayn Rand offered the following clarification:

There is no justification, in a civilized society, for the kind of mass civil disobedience that involves the violation of the rights of others — regardless of whether the demonstrators’ goal is good or evil. The end does not justify the means. No one’s rights can be secured by the violation of the rights of others. Mass disobedience is an assault on the concept of rights: it is a mob’s defiance of legality as such.

The attempt to solve social problems by means of physical force is what a civilized society is established to prevent. . . . A society that tolerates intimidation as a means of settling disputes — the physical intimidation of some men or groups by others — loses its moral right to exist as a social system, and its collapse does not take long to follow.3

In a civilized society, the central social-political norm for conduct appropriate to an individual is, to put it negatively, that no one may initiate physical force (and that includes threats and intimidation). Put positively, it is that one must respect individual rights and the rule of law — and this requires being fundamentally, and on principle, opposed to any kind of intimidation, threat, force, or mob action in pursuit of one’s ends.

Civilized conduct, in this sense, does not imply tolerance, passive appeasement, or the absence of outrage; it implies a respect for reason and the acceptance of reason as one’s means of dealing with one’s fellows. It implies that in protest and dissent it is a mind that one is trying to reach, not a mob one is trying to stir up. If a society comes to accept the use of force and intimidation as a means of settling disputes, the result, increasingly, will be gang warfare.