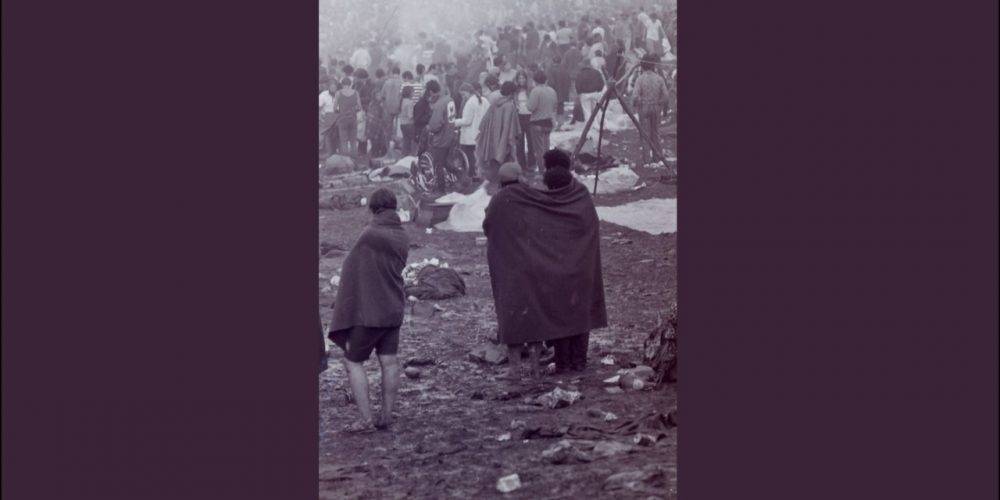 Woodstock & the “Fundamental Conflict of Our Age”

Having just celebrated the 50th anniversary of Apollo’s flight to the moon, we’re about to be inundated with commentary on another important anniversary from 1969: Woodstock. “For a half-century now,” as one analyst says, “Woodstock has been exalted as the apotheosis of the counterculture, the beautiful free love celebration that achieved peak Age of Aquarius.”

Over the years, cultural observers have polished the legend of Woodstock to a bright luster. According to one author, “For many of us it represents a magical, almost mythical, moment in time . . . when rock music presented in a pastoral setting could unite a community in love, peace, and freedom.” Woodstock, it has been said, was a “stunning demonstration of the true power of community” and the “beacon for a generation who believed that things could change for the better.” Says another: “Woodstock has acquired legendary status as both the defining and the last great moment of the 1960s.” Woodstock, says a New York Times columnist, “was the stuff of legend: a spirit, a nation, an ideal, amorphous but vivid, with an Oscar-winning documentary film, the 1970 ‘Woodstock,’ to prove it wasn’t all a hallucination.”

For many, the festival’s spirit is best captured by Joni Mitchell’s original song “Woodstock,” in which a “child of God” walking to the festival proclaims: “I’m going to camp out on the land/I’m going to try an’ get my soul free.” In a dream, the singer imagines bomber planes in the sky “turning to butterflies/Above our nation.” And then the melodious refrain: “We are stardust/We are golden/And we’ve got to get ourselves/Back to the garden.”

READ ALSO:  Ayn Rand on Apollo 11
If you didn’t live through it and haven’t heard much except the rosy headlines and the music, you might be excused for believing that the heyday of “Woodstock Nation” completely vindicated the hippies’ “peace-and-love” lifestyle as a practical, desirable choice.1 But if you dig more deeply, as Ayn Rand did in the festival’s immediate aftermath, you can see that what actually happened on the ground tells a much darker, uglier story.

Rand’s interest in analyzing Woodstock was not merely journalistic. As a philosopher, she was a staunch advocate of reason and its practical value in guiding one’s life. By examining the Woodstock festival, she saw an opportunity to help her audience “understand the power of philosophy and learn to recognize the specific forms in which philosophical abstractions appear in our actual existence.” In a November 1969 lecture called “Apollo and Dionysus,” Rand spoke about what could be learned from studying the contrasts between the crowds who attended the August 15–18 Woodstock Music & Art Fair and those who attended the July 16 launch of Apollo 11.2

Rand saw the two events as deeply linked by their ability to dramatize “the fundamental conflict of our age”: reason versus irrational emotion.”
Rand prepared for her talk by combing through reports from Newsweek and Time magazines and the New York Times in search of information on the Woodstock throng, then estimated at three hundred thousand. Those reports chronicled the travails of young people who had not planned how to feed themselves over a three-day period, or obtain drinking water, or shelter, or medical care.3 “The freedom to get stoned was all the freedom they wanted,” said Life magazine, and when the torrential rains came, they shouted curses at the sky. The Woodstock crowd, Rand observes, seemed content to exist in a “state of stagnant, resigned passivity: if no one comes to help them, they will sit in the mud. If a box of Cocoa Puffs hits them in the side, they’ll eat it; if a communally chewed watermelon comes by, they’ll chew it; if a marijuana cigarette is stuck into their mouth, they’ll smoke it. If not, not. How can one act, when the next day or hour is an impenetrable black hole in one’s mind?”

In this way, Rand argues, the Woodstock multitudes made victims out of others who acted responsibly, starting with the owners of adjacent lands who suffered from massive trespass and property destruction when festival attendees invaded private farms to use as campgrounds and latrines, burned fences, stole crops and generally helped themselves to whatever of value they could find. Says Rand:

The hippies are the living demonstration of what it means to give up reason and to rely on one’s primeval “instincts,” ”urges,” ”intuitions” — and whims. With such tools, they are unable to grasp even what is needed to satisfy their wishes — for example, the wish to have a festival. Where would they be without the charity of the local “squares” who fed them? Where would they be without the fifty doctors, rushed from New York to save their lives — without the automobiles that brought them to the festival — without the soda pop and beer they substituted for water — without the helicopter that brought the entertainers — without all the achievements of the technological civilization they denounce? Left to their own devices, they literally didn’t know enough to come in out of the rain.

In short, Rand contends that the behavior of the Woodstock crowds exemplifies irrational emotion — meaning, emotion as experienced by “those who do not care to know what they feel, and who attempt to subordinate reason to their emotion” — best symbolized by the mythical Dionysus.

On the surface, the Woodstock music festival had nothing much in common with the July 1969 Apollo moon mission. But Rand saw the two events as deeply linked by their ability to dramatize “the fundamental conflict of our age”: reason versus irrational emotion.

READ ALSO:  The False Promise of Stoicism
Having attended the July 16 launch at Cape Kennedy as NASA’s invited guest, Rand had gained firsthand experience of the crowds who came to watch.4 Whether they knew it consciously or not, Rand observes in her talk, the estimated one million people who converged on the Florida coast were “starved for the sight of an achievement, for a vision of man the hero,” and they longed to witness “the embodied concretization of a single faculty of man: his rationality.”

Those people were not a stampeding herd nor a manipulated mob; they did not wreck the Florida communities, they did not devastate the countryside, they did not throw themselves, like whining thugs, at the mercy of their victims; they did not create any victims. They came as responsible individuals able to project the reality of two or three days ahead and to provide for their own needs.

In their goals and their behavior, Rand argues, the crowds witnessing the moon launch exemplified an Apollonian reverence for rational achievement — in sharp contrast to the slovenly “counterculture” crowds who spread themselves thickly over a cow pasture in upstate New York.5

Rand’s analysis of these two iconic 1969 events offers timeless insights into the power of philosophy in shaping the course of human affairs. Listen to the whole talk, including an hour-long question and answer session, here.