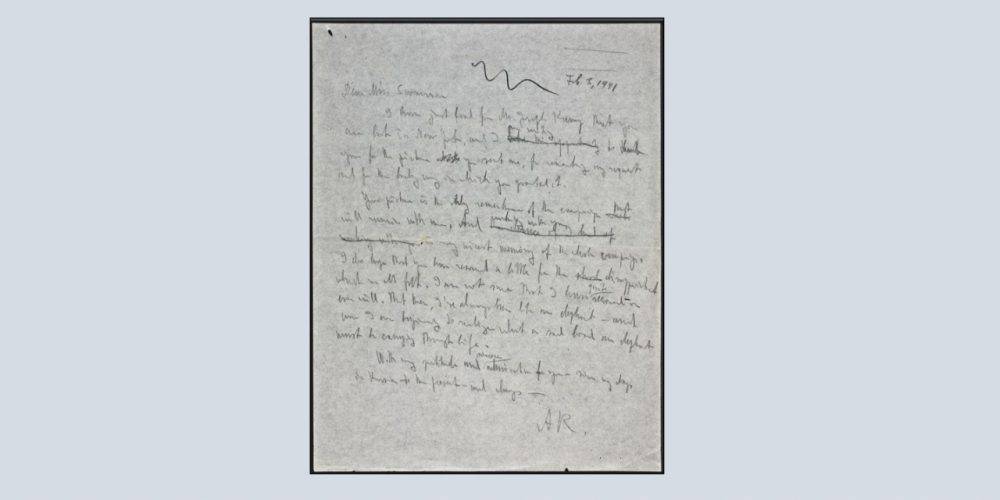 “I have always maintained that ideas must be treated with the same scrupulous precision as financial matters or legal documents,” wrote Ayn Rand to a newspaper editor in 1961. “I take an enormous amount of time, effort and thought on the formulation of my ideas.”

That statement mirrors a theme running through many of the twelve letters in this third set of never-before-published correspondence of Ayn Rand, selected and put in context by Michael S. Berliner, editor of Letters of Ayn Rand. This group is centered on Rand’s nonfiction writing and political activism, comprising exchanges with contemporaries who sought to promote individualism. Rand thought that their pursuit of this objective was often hindered by conceptual confusions, and so she strove in correspondence to provide the pro-freedom movement with tools to achieve intellectual clarity and precision.

For example, the collection includes two letters to Leonard Read (1898–1983), a leading free market advocate who founded the Foundation for Economic Education. Read frequently invited Rand to critique his writing and thinking in personal conversations and written correspondence (both of them referred to her as his “loyal ghost”). In a 1946 letter, Rand examines an article of Read’s called “The Scope of Economics and of Economic Education.”

Page 3 of the article contains the truly dangerous confusion. To refer to burglary as an economic, though misdirected, activity is really to rob definitions of all meaning. Burglary comes under the head of “crime.” “Criminal activity” and “Economic activity” are two distinct conceptions. You may prove, and rightly, that the rulers of totalitarian economies engage in criminal activities, that their policies belong in the class of criminal violence. But you cannot say that a common burglar is engaged in economic activity. Yet this is what you do say, in a sentence such as: “Burglary may be an economic activity for a few successful and unpunished burglars.” This is really talking communist dialectics and adding to the present day idea that “all terms are relative.”

The brief must be written most carefully so that it contain no sentences and no implication, direct or indirect, that we advocate any sort of Government censorship of ideas.
In the same letter, Rand offers philosophical advice on an issue that frequently arose in her discussions with conservatives who based their pro-liberty positions on religious faith. Responding to a passage by Read indicating that faith can be more convincing than reason, Rand points out that rationality versus irrationality is a more fundamental issue than individualism versus collectivism. “Unless, you are convinced, firmly, unquestionably, totally, completely and absolutely, in your own mind and for your own purposes, that REASON, not mystic faith, is the proper basis for all human actions and convictions,” she wrote, “you will not be able to achieve for yourself a clear and consistent philosophy of life.”

In 1949, Rand offered advice to the board of directors of the American Writers Association regarding a legal brief that the organization intended to file in a case involving the so-called Hollywood Ten (a group of filmmakers cited for contempt of Congress because they refused, in hearings before the House Un-American Activities Committee investigating communist infiltration in Hollywood, to disclose their political affiliations):

My concern here is that the brief must be written most carefully so that it contain no sentences and no implication, direct or indirect, that we advocate any sort of Government censorship of ideas. You may remember my concern last year when I was in New York over the unfortunate stand taken by the Hearst papers at the time, when they tried to use the Hollywood hearings as a justification for establishing a Federal censorship of the movies. That is what the Reds accuse all conservatives of doing or trying to do — and we must be very sure not to give them any foothold to justify such an accusation.”1

In a later letter to a member of that board, Rand clarifies the meaning of the term “democratic,” observing: “Since we are an organization of writers, we, above all people, should use words in their exact meaning.”

Other correspondence in this latest group of letters touches on Rand’s own political activism. In a letter to actress Gloria Swanson, Rand recalls their joint efforts in Wendell Willkie’s doomed 1940 campaign for the presidency. In the last week of that campaign, Rand had answered questions in a Manhattan auditorium that Swanson had rented for use in promoting Willkie. “Of all the speakers who came to talk there and share the podium with me, the most memorable by far was Ayn Rand, who had a fascinating mind and held audiences hypnotized,” the actress wrote in her autobiography, Swanson on Swanson.

Rand’s 1941 letter to Swanson laments the campaign’s failure and its aftermath. “Working with you is my nicest memory of the whole campaign,” Rand writes. “I do hope that you have recovered a little from the disappointment which we all felt. I am not sure that I have quite recovered — or ever will. But then, I’ve always been like an elephant — and now I am beginning to realize what a sad load an elephant must be carrying through life.”

The third installment of previously unpublished Ayn Rand letters is available on ARI Campus and on the Ayn Rand University app (Android or Apple — use the three-line “hamburger” menu icon in the upper left to navigate to “Works & Talks,” then in the drop-down menu replace “Name A -> Z” with “Newly Published.”)