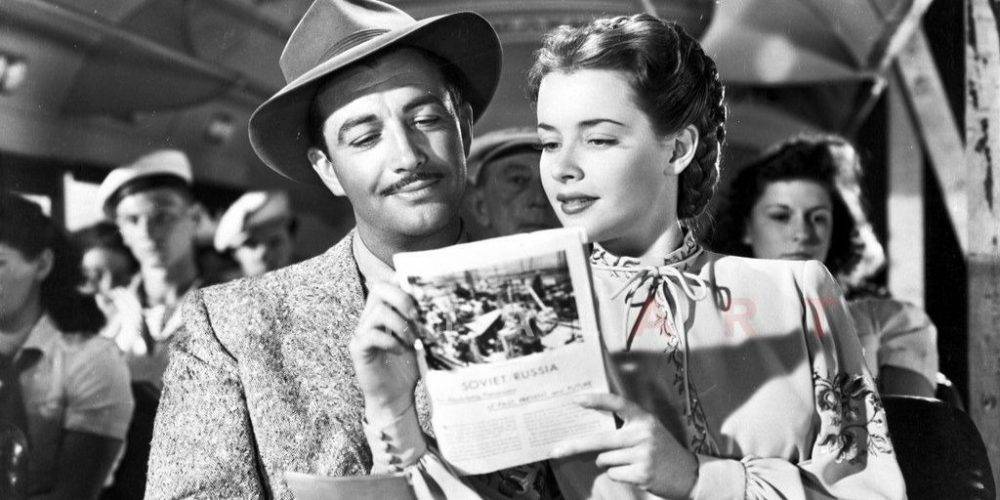 Why Rand Was Right to Testify Against Hollywood Communism

In 1947, during what some call the “McCarthy Era,” Ayn Rand was asked to testify before the House Un-American Activities Committee (HUAC) on the influence of Communism in Hollywood. She appeared as a “friendly witness.”

The standard verdict on these hearings, and on Rand’s participation, is unequivocal condemnation: The hearings were an inquisition that destroyed the careers of “blacklisted” filmmakers, ruined lives, and trampled the First Amendment. And the “friendly witnesses,” such as Rand, who testified voluntarily, were guilty of abetting an anti-Communist witch hunt.

The only problem with this standard assessment is that it’s totally wrong.

In his superb book Ayn Rand and Song of Russia: Communism and Anti-Communism in 1940s Hollywood, Robert Mayhew demolishes the standard verdict and sets the record straight. Mayhew, a professor at Seton Hall University, is a scholar of Rand and editor of several collections of essays analyzing her novels and ideas.

There are important moral issues bound up in the investigation of Communism in 1940s Hollywood. But, as Mayhew explains, given who “the Hollywood Communists actually were, who and what they in fact supported, and what really happened at the 1947 HUAC hearings and after, the standard picture is utter nonsense.” Deeply and painstakingly researched, the book provides essential context for evaluating Rand’s involvement in HUAC and the truth about Communism in the film industry.

Before agreeing to cooperate with the House Un-American Activities Committee, Ayn Rand gave serious thought to its purpose and propriety. She later reflected on her experience and evaluated the criticisms leveled against HUAC. Mayhew offers us a detailed look at how Rand grappled with the moral and legal questions surrounding the hearings.

The book quotes at length from Rand’s own journal entries where she addressed, for her own clarity, the objections leveled against the House Un-American Activities Committee and those who, like her, testified as friendly witnesses. The HUAC was inquiring, not into “a question of opinion, but into a question of fact, the fact being membership in the Communist Party,” which was directed and financed by a foreign power. The aims of the Party, by its own admission, include acts of criminal violence; so when Congress investigates it, the question is a factual matter, about criminal activity, not a matter of the ideas driving it. Nor, Rand thought, was it morally or legally wrong for private individuals, organizations, and corporations to “blacklist” people exposed as members of the Communist Party. Such a “blacklist” is a private boycott, not a government action punishing people for their beliefs nor an instance of censorship.

Rand thought it was important to expose not only the fact that card-carrying Communist Party members worked in Hollywood, but also that they were injecting pro-Soviet propaganda into movies.
There was a real problem of Communist infiltration and influence in Hollywood, but the hearings, Rand thought, were largely futile and at best a means of publicizing the issue by “calling attention to the conspiracy that was going on.” She had a dim view of the committee members, regarding them as a “bunch of fools, way out of their depth.” But contrary to the commonly held view, Rand did not regard the hearing as “any kind of interference with anybody’s rights or freedom of speech.”
READ ALSO:  Experts Assess Pandemic’s Damage to the Economy

Mayhew notes that Rand was uniquely qualified to comment on Hollywood communism. She had witnessed the 1917 revolution in Russia, she had experienced first-hand the Communists in power, and she had worked as a screenwriter in Hollywood.

What was the substance of Rand’s testimony before the HUAC?

Rand thought it was important to expose not only the fact that card-carrying Communist Party members worked in Hollywood, but also that they were injecting pro-Soviet propaganda into movies. Mayhew observes that part of Rand’s aim in testifying was to convey that “dictatorship — and at the time, that meant the Soviet Union and Communism most of all — is evil, dangerous, and contrary to the interests and fundamental principles of America.” Despite what she had been led to expect, at the hearing she was asked to comment on only one film, Song of Russia. Mayhew uses this pro-Soviet film, written predominantly by members of the U.S. Communist Party, as a case study to illuminate both Rand’s testimony and Communism in Hollywood.

Mayhew’s book provides a draft-by-draft analysis of the screenplay of Song of Russia, a summary of the finished movie, and a detailed examination of Rand’s testimony (which is also reproduced in full as an appendix). The book takes key points in Rand’s testimony about the elements of propaganda in the film and considers them in the light of the documented facts about the Soviet Union’s totalitarian regime. For example, Song of Russia depicts village life in the USSR as joy-filled, with abundant food, and privately owned tractors, but the reality was brutally different. The USSR had enacted by force a policy of collectivized farming, eradicating private property, and deliberately causing a famine to wipe out a whole class of farmers. The film’s outlandishly rosy portrayal of village life served to glorify the Communist system.

Mayhew’s in-depth analysis vindicates Rand’s testimony. The film Song of Russia comes off as a work riddled with pro-Soviet propaganda.

And yet it is Ayn Rand (and other friendly witnesses at HUAC) who is denounced as a villain. Why? Many who sympathized with the “Hollywood Ten” — a group of filmmakers who refused to cooperate with HUAC — have condemned Rand’s testimony. Mayhew analyzes their criticisms.

These are a study in distortion and dishonesty. Mayhew notes:

Not only are they [the critics] unconcerned with the true nature of Soviet Russia, they ignore much of what Ayn Rand said — the bulk of her HUAC testimony — and distort what they do not ignore. They employ the same methodology as the Soviets; that is, they assume that one may properly ignore and distort the facts if it promotes a leftist end, in this case, smearing the HUAC and a well-known anti-Communist and pro-capitalist.

With astonishing uniformity, akin to a “Party line,” many critics focus on one incidental remark Rand made in answer to a question about whether people in the Soviet Union smile. Understood in context, Mayhew shows, her point is that Russians do not smile openly and in approval of the totalitarian system grinding them down. But her observation has been distorted to the claim that Russians never smile and treated as if it were the essence of her testimony. By implying that Rand’s testimony was self-evidently absurd, the critics obscure the full scope of what she told the committee to evade the truth about Soviet totalitarianism.

Summing up, Mayhew observes: “Song of Russia — however inept and typically ‘Hollywood’ — is a fraud that dishonors these millions [of people tyrannized and murdered by the Soviet regime]. But much worse than Song of Russia are the leftists who also dishonor these millions, while smearing a great mind for her attempt to set the record straight.”

Mayhew’s book is a model for how to untangle and think through the issues surrounding the penetration of Communists in 1940s Hollywood.
The book spotlights a further, albeit lesser, moral inversion in the standard view, regarding the allegation that blacklisted filmmakers unjustly lost their careers. In fact, there’s reason to believe that some Communists nevertheless were able to return to work in Hollywood under assumed names, thanks to their connections. Worse, some are celebrated as heroes and glorified in popular movies. But there were innocent victims whose careers were ruined in the wake of the HUAC hearings. There are credible reports that some of the friendly witness — actors, screenwriters — were indeed blackballed and prevented from working in Hollywood again.

While the HUAC hearings are sometimes placed in the “McCarthy Era” — tarring Rand and other participants with the accusation of “McCarthyism” — this is factually wrong. Sen. Joseph McCarthy had no part in HUAC, which was formed in 1938; Ayn Rand testified in 1947. McCarthy began his investigations in 1950 and focused on Communist penetration, not of Hollywood, but of the US government.

Furthermore, while Rand was no admirer of McCarthy or his methods, she identified early on that the term “McCarthyism” was an illegitimate concept coined as a deliberate smear. Its alleged meaning, she wrote, was “unjust accusations, persecutions, and character assassinations of innocent victims.” But its real meaning, she argued, was “Anti-Communism,” with the aim of discrediting as necessarily unjust and irrational any uncompromising opposition to Communism.

The conventional verdict on HUAC and on Rand amounts to a zealous condemnation that’s detached from the facts, the historical context, the actual nature of Communist infiltration, and the moral meaning of that ideology. This is a travesty of what it looks like to think about and evaluate those issues.

By contrast, Mayhew’s book is a model for how to untangle and think through the issues surrounding the penetration of Communists in 1940s Hollywood. The book is not only an act of justice toward Ayn Rand and other friendly witnesses. It is also, more broadly, an act of justice toward victims of the Soviet regime, who perished while Communists in Hollywood whitewashed their Soviet oppressors and worked to advance that evil ideology.

At the HUAC hearings and throughout her career, Ayn Rand spoke out about the evils of dictatorship and collectivism, in all their forms. She was right to do so.