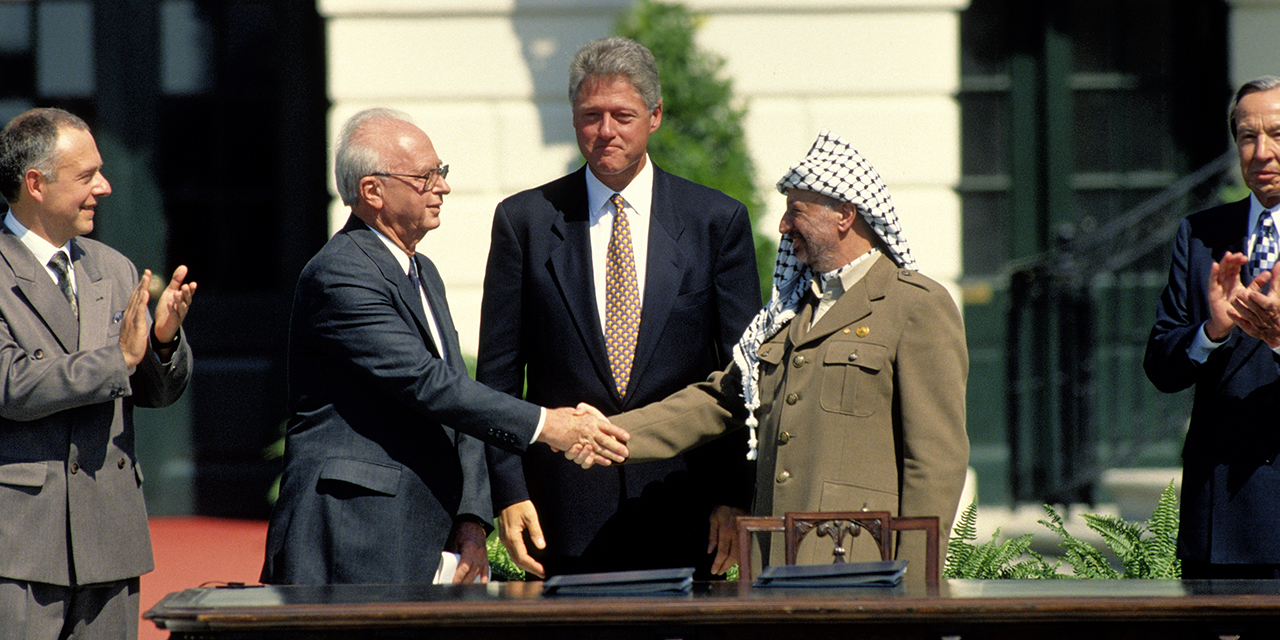 25 Years of Israeli-Palestinian “Peacemaking” Have Failed

From the vantage of a quarter-century later, there’s a tragic irony in the history-making vibe that marked the signing of the Oslo peace accord between Israel and the Palestinians.

When President Clinton proclaimed the event a “victory for peace,” he voiced not empty rhetoric, but many people’s fervent expectations. Let us go “from this place to celebrate the dawn of a new era,” Clinton said, “not only for the Middle East but for the entire world.”

Flanking Clinton on the White House lawn that day, Sept. 13, 1993, were Israeli prime minister Yitzhak Rabin, a decorated war hero, and Yasser Arafat, leader of the Palestinian Liberation Organization and pioneer of international terrorism. Stepping back from the podium, Clinton reached to his left and to his right, and ushered Arafat and Rabin toward each other.

Applause and cheers punctuated the moment. “The jaded were awed,” observed one reporter, noting that “there were a lot of men in the audience crying.”

What has been the legacy of this acclaimed venture in peacemaking? Not peace, but worse conflict.

To begin to understand why this peace process aggravated the conflict, consider one crucial factor and its implications: Fundamentally, the peace process was morally bankrupt.

It reflected the idea that you can bargain with anyone; the moral character of the adversaries is beside the point. This negation of moral judgment meant disregarding the moral difference between Israel, a basically free society, and the Palestinian movement, a political-ideological force seeking to subjugate people. Under the land-for-peace formula of the peace process, Israel would cede land to the Palestinian movement, for the creation of a future state, and in exchange, the Palestinians would stop their violent attacks. To gain moral credibility as a partner for peace, the Palestinian leadership just had to utter a promise, a promise it constantly flouted.

The peace process did usher in a “new era in the Middle East,” but one that only dictators and jihadists have reason to celebrate.
Evading that reality and its moral significance, the peace process worked to enable the Palestinian movement through the creation of a new quasi-state, the Palestinian Authority. This regime, an interim step toward a fully sovereign state, was granted broad powers within its jurisdiction in areas of the West Bank and Gaza Strip — along with millions of dollars in international aid.

The Palestinian Authority was Arafat’s dictatorship. The regime distinguished itself by the pervasive “intimidation of the media and human rights organizations, to the point that it became virtually impossible to transmit any message other than one personally approved by Arafat.” It has brutally trampled the rights of its own people and fomented attacks on Israel.

A turning for the worse came in 2006. During George W. Bush’s crusade for Mideast democracy, the U.S. demanded elections within the Palestinian Authority — and insisted on allowing the jihadists of Hamas to run candidates. Even more fervently committed to Israel’s destruction than rival factions, the jihadists won handily. Soon the Palestinian Authority fractured. Hamas took over the Gaza Strip, making it a quasi-state under Islamic religious law. They began launching rocket attacks. These led to major wars in 2008-09 and 2014. The rockets have continued sporadically. One new tactic: incendiary kites and balloons that set fire to Israeli farmlands.

The Trump administration is planning to launch its own Israeli-Palestinian peace deal. Some of its decisions so far — recognizing Jerusalem as Israel’s capital and withholding aid from Palestinians and from the UN’s agency for Palestinian refugees — have departed from earlier U.S. policy. It seems the administration is resetting the negotiating terms in preparation for rebooting the failed land-for-peace approach. What’s needed instead is a fundamental break with the amoral peace-process mindset.

We need to take seriously the lesson of the last 25 years. It is because the peace process negated the principle of moral judgment, that it enabled the Palestinian movement to subjugate, indoctrinate, and impoverish its people while continuing to attack Israel. And, over time, it empowered the jihadists within the Palestinian movement.

The peace process did usher in a “new era in the Middle East,” but one that only dictators and jihadists have reason to celebrate. Going forward, we need new, clear-eyed thinking about what justice demands and America’s actual stake in the Israeli-Palestinian conflict.

A version of this article originally appeared at The Hill.