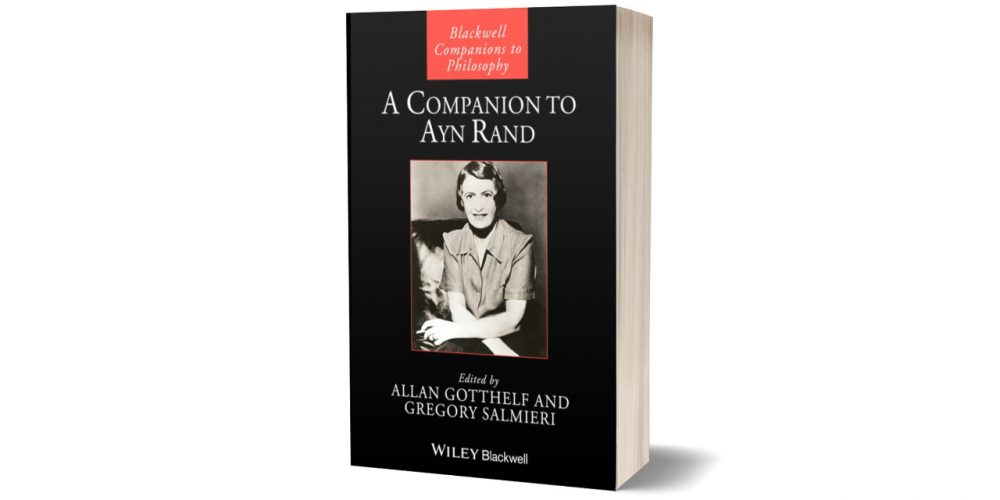 A Companion to Ayn Rand Now in Paperback

What does it look like to take Ayn Rand seriously? Leading scholars of Objectivism show us in the newly released paperback edition.

A Companion to Ayn Rand was first published in 2016. The volume is part of Wiley-Blackwell’s Blackwell Companions to Philosophy series. Typically for hardcover books from academic presses, the original price was a prohibitive $140 (the e-book was similarly priced). It is, therefore, a cause for celebration that late last year, the Companion became available in paperback with a drastically reduced price. (The e-book is now priced similarly, too.) This makes the Companion more accessible to anyone interested in deepening their understanding of Rand’s philosophy.

The Companion was conceived in 2006 by Gregory Salmieri, who proposed to the late Allan Gotthelf that they coedit it. (Gotthelf passed away in 2013, leaving much of the editorial work to Salmieri.) The product of their effort contains sixteen chapters on every major area of Rand’s thought, plus a biographical chapter and an introduction to the study of Rand. Each chapter is written by authors who “have made mastering Rand’s works and philosophy a significant part of their careers.”

The publication of the Companion was a significant milestone in scholarship on Rand. Academic presses often publish edited collections to introduce students and scholars to important historical figures or fields of study. Wiley-Blackwell’s Companions to Philosophy series features volumes on Aristotle, Hobbes, Spinoza, Kant, and most of the traditional canon of Western thought. In 2016, Blackwell added A Companion to Ayn Rand to the series.

The book begins with “Introduction to the Study of Ayn Rand” by Salmieri (available free online). Salmieri urges readers to take Ayn Rand seriously and offers the Companion as an aid in doing so. “To take an author seriously means,” he explains, “to read her, not with an eye toward confirming one’s prejudices (whether favorable or unfavorable), but simply with an eye to understanding what she thinks and why.” Unfortunately, Salmieri has plenty of examples of commentators who recognize Rand’s influence but fail to take her seriously.

Salmieri’s advice, though, doesn’t apply only to critics. He makes the case that even Rand’s fans have work to do to really take Rand seriously: “if she strikes you as obviously correct with respect to an issue where you know many people find her views counterintuitive, it means working to identify the premises that you share with her and not with them, and then figuring out how to determine whether those premises are true.”

The book promises to help readers live up to the demands of taking Rand seriously, and it delivers. As Salmieri explains in his introduction, part of what it means to take a philosopher seriously is to relate her views to their alternatives. Accordingly, much of the volume is devoted to such comparisons across the whole of Rand’s thought.

For example, Salmieri’s chapter, “The Objectivist Epistemology,” contrasts Rand with Enlightenment advocates of reason. In the chapter’s first section, Salmieri explains what Rand has in common with figures like Bacon and Locke. Each philosopher sees reason as essentially involving guidance for acquiring knowledge and seeks to give knowledge a solid foundation. But Rand offers different principles of guidance because she has a different view of how we form the building blocks of our knowledge, our abstract concepts. Locke returns later in the volume as a point of comparison in chapter 8 on political theory. Authors Fred Miller and Adam Mossoff contrast Rand with natural rights theorists and other advocates of individual rights.

Another component of taking a philosophy seriously is evaluating how it responds to criticism. In chapter 7, Darryl Wright considers the objection that Rand’s advocacy of individual rights is incompatible with her egoism. Since Rand is an egoist, it is incumbent upon her to show that respecting the rights of others is in one’s interest. The objection is that Rand fails to show this, leaving the obligation to respect the rights of others unsupported. Wright’s reply clarifies several points in social philosophy by which Rand supports the need to respect rights. In doing so, he also explains Rand’s principle that each man is an end in himself and differentiates it from the Kantian principle with which many readers confuse Rand’s.

Seasoned Rand fans might expect a chapter on Rand’s political commentary to tread familiar water. However, chapter 15, by the late John David Lewis and Gregory Salmieri, contains, in my view, some of the book’s most original material. Titled “A Philosopher on Her Times,” Lewis and Salmieri’s subject is Rand’s political and cultural commentary following the publication of Atlas Shrugged. “Our subject in this chapter is Rand’s distinctive view of the philosophical roots and meaning of the events of her time — especially the events of the 1960s and 1970s when she was most active as a commentator on current events.” The authors integrate twenty-five years’ worth of material to argue that Rand’s political writings have a unified theme. One significant value of this chapter, especially to younger Rand fans, is Lewis and Salmieri’s work contextualizing the historical events Rand is discussing.

A Companion to Ayn Rand is available now in paperback. The book is a must-have for any Rand fan’s library.