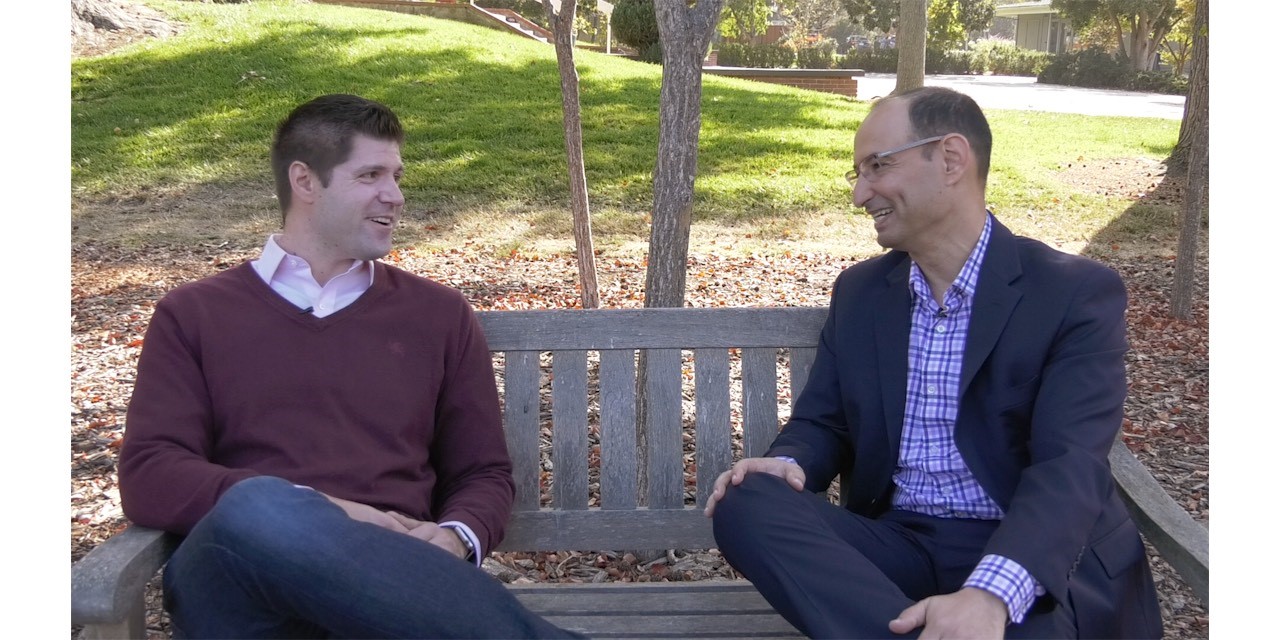 Brian Amerige is the former Facebook engineer whose internal memo “We Have a Problem with Political Diversity” was leaked in August to the press. “The post went up quietly on Facebook’s internal message board last week,” reported the New York Times at that time, and “it quickly took off inside the social network.” The memo (see full text below), and public reactions to it, became part of a wider debate about the intellectual climate in Silicon Valley.

In October, Amerige announced his decision to leave the company over concerns about its content policy and its apparent acceptance of the inevitability of government regulation. “Our policy strategy is pragmatism — not clear, implementable long-term principles,” Amerige observed in his announcement (see full text below), “and our PR strategy is appeasement — not morally earned pride and self-defense.”

Amerige is also an Objectivist, and in this exclusive interview with Ayn Rand Institute CEO Tal Tsfany, he discusses the events surrounding his leaked memo, the corporate culture at Facebook and the influence of Ayn Rand’s ideas on his life and career.

Here are the full texts of two memos referenced in the video interview with Brian Amerige: “We Have a Problem with Political Diversity” (August 2018) and “I’m Leaving Facebook” (October 2018). The memos are reproduced here without endorsement, simply as context so that viewers can better understand events referred to in the interview.

“We Have a Problem with Political Diversity”

We are a political monoculture that’s intolerant of different views.​ We claim to welcome all perspectives, but are quick to attack — often in mobs — anyone who presents a view that appears to be in opposition to left-leaning ideology. We throw labels that end in *obe and *ist at each other, attacking each other’s character rather than their ideas.

We do this so consistently that employees are afraid to say anything when they disagree with what’s around them politically.​ HR has told me that this is not a rare concern, and I’ve personally gotten over a hundred messages to that effect. Your colleagues are afraid because they know that they — not their ideas — will be attacked. They know that all the talk of “openness to different perspectives” does not apply to causes of “social justice,” immigration, “diversity”, and “equality.” On these issues, you can either keep quiet or sacrifice your reputation and career.

These are not fears without cause. Because we tear down posters welcoming Trump supporters. We regularly propose removing Thiel from our board because he supported Trump. We’re quick to suggest firing people who turn out to be misunderstood, and even quicker to conclude our colleagues are bigots. We have made “All Lives Matter” a fireable offense. We put Palmer Luckey through a witch hunt because he paid for anti-Hillary ads. We write each other ad-hoc feedback in the PSC tool for having “offensive” ideas. We ask HR to investigate those who dare to criticize Islam’s human rights record for creating a “non inclusive environment.” And they called me a transphobe when I called out our corporate art for being politically radical.

This is not okay. Not just for our internal culture, but for our own viability as a company. While the problem isn’t unique to us, we are entrusted by a great part of the world to be impartial and transparent carriers of people’s stories, ideas, and commentary. Congress doesn’t think we can do this. The President doesn’t think we can do this. And like them or not, we deserve that criticism. We are blind to and dismissive of what people beyond our walls (let alone even within our walls) think about complex issues that matter. I’ve been here for nearly 6.5 years and this has gotten exponentially worse in the last 2.

I don’t know how to fix this problem on my own. What I do know is that these issues can’t be fixed if we continue to be isolated and silent. So that’s what this group is for: (a) to be a space where you can talk about these issues without fear of the mob, and in the process (b) to talk about how we can fix this.

There’s only going to be one core rule in the group, and it’s that if you attack a person’s character, rather than their ideas, you will be banned.

Let’s see where this goes.

I’m sad to say that Friday, October 12th will be my last day at Facebook.

This was a difficult decision to make because I love so much about this company, our mission, and our leaders. But I’ve been thinking about this for almost a  year and though a certain leak delayed me a bit, I know it’s time for me to move on.

There’s a lot to say about why, and this post certainly won’t cover it all. Unlike many others who’ve been here for a while, I’m not leaving because “it’s time for something new.” I believe that it takes a long time to do good work, and novelty isn’t my kind of thing: change is good when it’s change for the better. I’ve changed teams once in my 6.5 years at Facebook.

I’m leaving because I’m burnt out on Facebook, our strategy, our culture, and our product.

Strategically, we’ve taken a stance on how to balance offensive and hateful speech with free expression. We’ve accepted the inevitability of government regulation. And we’ve refused to defend ourselves in the press. Our policy strategy is pragmatism — not clear, implementable long-term principles — and our PR strategy is appeasement — not morally earned pride and self-defense.

Culturally, it’s difficult to have meaningful conversations about any of this because we’re a political monoculture, and these are political issues. And while we’ve made some progress in FB’ers for Political Diversity (which is approaching 750 members now), and while I’m pleased to say that senior company leadership does take this seriously (as you will hopefully soon see), we have a very long way to go.

To that end, while I remain as in love as ever with our mission and my colleagues’ nearly-always good intentions, I disagree too strongly with where we’re heading on these issues to watch what happens next. These issues hang over my head each morning, and I don’t want to spend all of my time fighting about them.

Our product is also at a crossroads (and has been for years) as sharing in the Facebook app continues to dwindle. The pivot to Stories will hopefully help, but I’m disappointed by how reactive our future appears to be. Ultimately, I’ve spent the bulk of my time at Facebook trying to build a stronger product culture. From tech-leading Paper, to starting and leading the team that built our UI foundation (FIG, now FDS), I wanted Facebook to be a place where people with great product sense, focus, intuition and a little obsessiveness about quality were attracted, belonged, and were rewarded. I think we made progress, but the headwinds have been and continue to be strong, and it shows in our future-looking product strategy and the relative rarity of strong product thinkers at Facebook.

My departure isn’t because I think these issues are intractable. These problems can be solved — just not by me, not anymore, at least. I care too deeply about our role in supporting free expression and intellectual diversity to even whole-heartedly attempt the product stuff anymore, and that’s how I know it’s time to go.

Still, this company gets so much right, and you all have a lot to be proud of. The density of talent at Facebook has always been one of my favorite parts of working here, and there are simply too many incredibly people I’ve had the pleasure of getting to know and building something with for me to list. My teams have always felt like family to me, and I’m going to miss them terribly.

Beyond the people, I would be remiss if I didn’t emphasize two aspects of our culture that are especially good: our scrappiness, and how we think about individual contributor roles.

Be Scrappy. I’ve always understood “move fast” to really mean “be scrappy,” and what a pleasure it’s been to watch how +28,000 employees haven’t substantially changed that. I don’t think “move fast” applies to product direction, design standards, or engineering quality. It’s about process. As the company continues to grow, you will increasingly find that most people in any given room are new and don’t necessarily know that it’s okay to say “sorry, I don’t understand any of what you just said” or that they’re supposed to ask “Do we really need to wait for the monthly review?” These kinds of questions are our secret weapon against becoming a bureaucracy where innovative people don’t want to work. So keep asking “why?” about everything related to how we work.

Roles and Responsibility. The way we think about team roles is better than anywhere else I’ve seen. We let ICs truly lead, we incentivize transitions to and from management for the right reasons, and we let teams figure out who does what with deference to strengths instead of functional titles. We could still do better (particularly around how senior ICs integrate with director+ level decisions), but this way of thinking is the industry leading and has made Facebook a very special place for me, as something of a hybrid between engineering, product, and design.

My professional purpose has always been to “amplify human capability and raise standards,” and while I’m proud to say I’ve done a little of both at Facebook, I’m excited to focus more intensely on this going forward. I’m starting a company with a good friend of mine, Alex Epstein, at the intersection of applied philosophy (epistemology, specifically) and technology.

I don’t know if leaving Facebook affords me one parting word of advice, but I have one for you anyway: I want to encourage you all to believe in yourselves more. In the value your products create for the world. In your own product sense and instinct when they contradict the data (which we’re often too confident in). In your ability to create something people love. And in your perspective when no one else agrees . . . especially when you’re afraid to share it. The truth does not emerge from averages, but your ability to reason lets you glimpse it — stand by it, defend it, and be proud of it. Everything else will take care of itself.