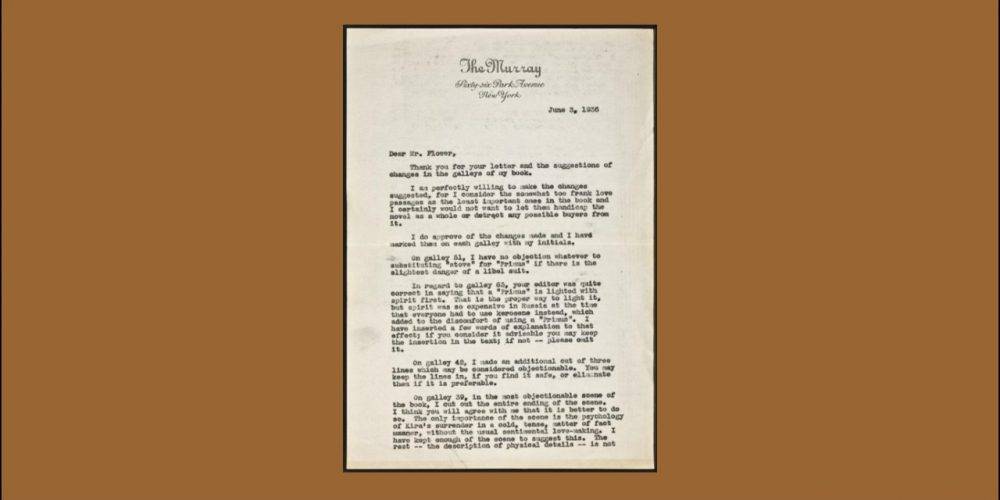 “I am afraid I’m so happy that I’m a little dizzy,” wrote Ayn Rand to an acquaintance in December 1941. “The big event in my life is that I have just sold a novel to Bobbs-Merrill Company.” That novel, as yet unfinished, would be published a year and a half later as The Fountainhead. “Bobbs-Merrill liked it well enough to give me an advance that will permit me to leave my job at Paramount and finish the novel,” Rand explained. “I cannot say what it means to me — to be able to return to creative writing again.”

That personal note is one of the highlights in the second group of never-before-published letters of Ayn Rand, now available online at ARI Campus and on the Ayn Rand University app. A total of forty letters are being released, categorized according to general subject matter: Hollywood, fiction, nonfiction (including political activism), and more personal correspondence. The earliest letter in this new group of fourteen was written in 1935, the latest in 1980.

Shortly after The Fountainhead was published in 1943, a reviewer named Bett Anderson published a review in the Pittsburgh Press and subsequently asked for Rand’s autograph. “Please tell Mrs. Anderson for me that I was delighted to hear of her request, and I am complying with real pleasure,” Rand wrote to an intermediary.

I do remember her review of THE FOUNTAINHEAD very well indeed. It was one of the only two reviews which I really liked — the other one was Miss Lorine Pruette’s review in the NEW YORK SUNDAY TIMES. At a time when so much senseless drivel was being written about THE FOUNTAINHEAD by the majority of the reviewers, these two gave me hope that some real intelligence still existed in the world. I shall always be profoundly grateful to Mrs. Anderson for that.

In a letter to the Broadway producer of Night of January 16th, Rand argued at length that an actor named William Bakewell was unsuited to the part of “Guts” Regan, head of the New York underworld,  in her drama. “Mr. Bakewell’s personality is that of a meek, harmless, wholesome high-school child and this is the type of part which he has played on the screen,” Rand wrote. “His personality would not allow him to play even the part of a small-time gangster, merely a member of a gang. But when it comes to playing . . . Public Enemy #1 with a price of $25,000 on his head — well, you must grant me that it becomes dangerously near to being ludicrous.”

READ ALSO:  Previously Unpublished Letters of Ayn Rand Now Online
In another letter, Rand agreed with her publisher’s suggestion to cut “somewhat too frank love passages” in the British edition of We the Living, noting: “I certainly would not want to let them handicap the novel as a whole or detract any possible buyers from it. . . . If you find any other passages that arouse doubt on the same grounds as the above, please let me know and I shall be glad to adjust them.”

The second group of previously unpublished Ayn Rand letters is available at ARI Campus and on the Ayn Rand University app (Apple and Android). (In the app, use the three-line “hamburger” menu icon in the upper left to navigate to “Works & Talks,” then in the drop-down menu replace “Name A -> Z” with “Newly Published.”) The first installment is available on ARI Campus here. The remainder of the letters will be released in future installments.