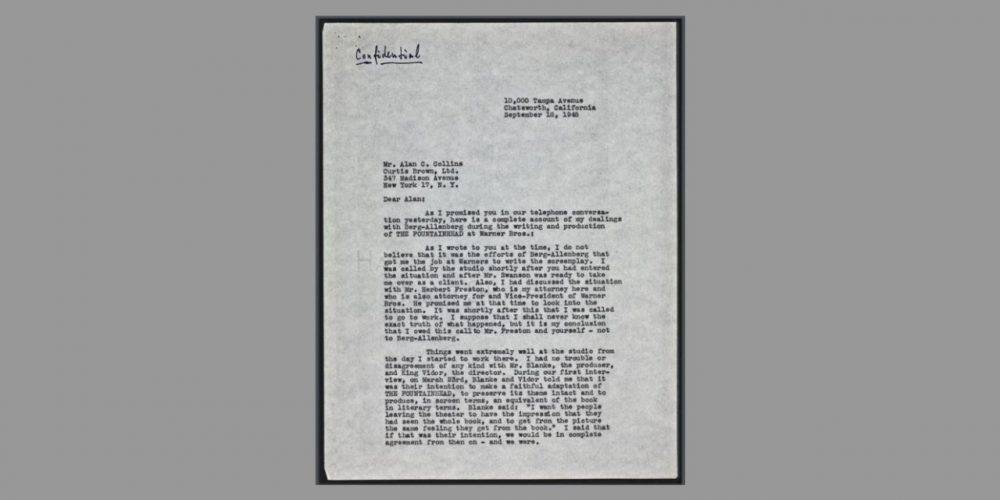 What was Ayn Rand really like? Leonard Peikoff, her longtime student and friend, has said that he would often tell people: “Read her novels; she was everything their creator would have to be.” But with the 1995 publication in book form of her selected correspondence, Peikoff added a follow-up: “Read her letters.” He explained: “These letters do not merely tell you about Ayn Rand’s life. In effect, they let you watch her live it, as though you were an invisible presence who could follow her around and even read her mind.”

“Although Ayn Rand’s correspondence frequently dealt with technical philosophy,” says Berliner, “I’ve always been impressed by the care she took with non-philosophical issues and even relatively trivial matters, and this mindset comes across in virtually all of her correspondence. For a variety of reasons, she was not a ‘casual’ letter writer but always took great care to write with great precision on matters that today are usually relegated to a quick, unpunctuated tweet.”

Back in the 1990s, Berliner spent hundreds of hours reading Rand’s correspondence, selecting the very best for the book. But more recently, while preparing a finding aid for researchers, Berliner found himself once again immersed in Rand’s papers — and making some new discoveries.

“I noted some interesting letters that I hadn’t selected for the Letters book,” says Berliner, who was the Ayn Rand Institute’s first executive director, from 1985 to 2000. “Now, after taking a second look, these letters struck me as meriting a wider audience. I selected these forty previously unpublished letters because they offer insight into some particular topic or some aspect of Ayn Rand’s life, or, more often, as further evidence of how her mind worked on a variety of matters.”

Now, for the first time, these letters — the earliest of which dates from 1935 and the latest from 1980 — will be available free online, at ARI Campus or on the Ayn Rand University app (Apple and Android). (In the app, use the three-line “hamburger” menu icon in the upper left to navigate to “Works & Talks,” then in the drop-down menu replace “Name A -> Z” with “Newly Published.”)

These letters show Ayn Rand in action in the real world: never compromising on principle, always concerned with advancing her professional and personal interests, and consistently able to make interesting observations that have continuing relevance today.

The forty letters have been divided into four groups by subject matter. Although there’s unavoidable overlap among subjects, the first group (eight letters) pertains to Rand’s activities in Hollywood, the second (fourteen letters) to her fiction writing, the third (twelve letters) to her nonfiction and political activism, and the fourth (six letters) to her more personal correspondence.

The first group is online now, with the remaining groups slated for publication in coming weeks.

READ ALSO:  Is Ayn Rand a Writer of Didactic Fiction?
“Ayn Rand lived in the Los Angeles area for two eight-year periods so that she could work in the film industry,” says Berliner. “In the fall of 1926, she arrived in Hollywood with the hope of starting a career as a film writer. She had just come from Russia, where she studied at the State Technicum for Screen Arts in her native Leningrad. After meeting Cecil B. DeMille on her second day in Hollywood, she became a film extra and then a junior writer for DeMille. When his studio closed, she worked at RKO in the wardrobe department but quit when she sold a story to Paramount. In 1934, she moved to New York City for the opening of her play, Night of January 16th, which subsequently had a long run on Broadway. She returned to Hollywood in late 1943 when The Fountainhead was sold to Warner Bros. with her as the screenwriter.”

The letters in the first group were written from her home in southern California. The longest letter in the new collection features a blow-by-blow description of the struggles Rand endured during her involvement in the film adaptation of The Fountainhead, for which she agreed to write the script. The letter describes her efforts to make certain that her script would be true to the novel and filmed as she wrote it. In this letter, written in 1948 to Alan Collins, her trusted literary agent, Rand outlines her frustrating experiences with the Hollywood agents who represented her in connection with her script work. What might have been a dry report or confusing jumble of events if written by a lesser talent becomes a riveting tale in the hands of this master of narrative. Regarding the climactic courtroom scene in which the hero, Howard Roark, gives a speech explaining why he took the action that led to his arrest, Rand writes:

You realize, of course, that this speech had to be written as carefully as a legal document. I had to weigh every word, every thought — in order not to leave any loopholes which would permit anyone to accuse us of some improper ideology. I had to make every idea crystal clear, cover every possible implication, guard against any chance of misunderstanding, avoid any possibility of confusion. I did it — and preserved the dramatic and literary qualities of the speech at the same time. You understand the problems of writing. Try to imagine what sort of effort this took.

Rand worked on the script with a team that included director King Vidor, producer Henry Blanke, and actor Gary Cooper. The team approved the script for filming. However, on the third day of filming the courtroom scenes, Rand writes:

I came on the set a little after 10 o’clock (the set is called for 9, but the first hour is taken up with lighting and setting up the camera, and Blanke had told me to be there by 10.) Just as I came on the stage, the bell rang for the next take, and what I saw being done was this: Vidor was taking a shot of Cooper starting his speech from the middle, cutting out the entire first third of it.

The cut made the whole speech senseless and left glaring holes in the political theory of the speech, making it open to every kind of attack, objection or smear. The speech could be construed as anarchism or fascism or simply plain drivel; with the first third taken out, one could not tell what the character was talking about. Imagine a carefully devised, complex legal contract with the first two pages torn out of it — and visualize what sense or meaning would be left in the remnant.

Rand’s reactions to this crisis — including a threat to separate herself from the project and denounce the film if her script was mutilated — show a woman of integrity in action, struggling against men who had power to ruin the film, and fighting without support from the agent who was supposed to be taking her side.

READ ALSO:  Justice in a Benevolent Universe
In other letters, she engages in strategy with her lawyers for resolving mysteries surrounding the pirated Italian film version of her novel We the Living. At the time, she was thinking of granting the Italian publishing rights to The Fountainhead to the Italian firm of Baldini and Castoldi. “I will have to wait before I sign this contract,” she writes, “to learn what their part was, if any, in the piracy of WE THE LIVING. If they had anything to do with it, I certainly will not sell them another book of mine.”

In one letter, Rand offers career advice to an aspiring screenwriter who’s thinking of working on a farm and writing in his spare time. Elsewhere she speaks of loving her new home (“ultra-modern, by Richard Neutra, all glass, steel and concrete”) while generally disliking Southern California (“I hate the place for the very reasons most people like it — the sunshine, the palm trees, the going around in slacks, and all that”).

To access this first group of previously unpublished Ayn Rand letters, visit ARI Campus on the web or use the Ayn Rand University app (Apple and Android). (In the app, use the three-line “hamburger” menu icon in the upper left to navigate to “Works & Talks,” then in the drop-down menu replace “Name A -> Z” with “Newly Published.”)