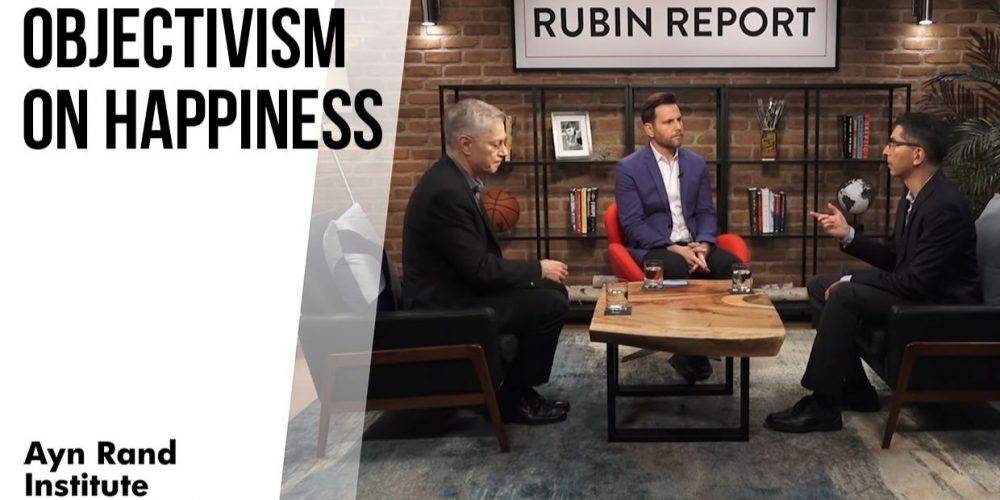 “People unfamiliar with Ayn Rand often view her narrowly as a political thinker, but in fact there’s far more to her philosophy,” says Tal Tsfany, CEO of the Ayn Rand Institute. “Rand described Objectivism as a philosophy for living on earth, and so we wanted to produce a video series that would highlight her unique approach to living well and achieving personal happiness. After all, that’s the ultimate goal, to which politics is only a means.”

The series, Objectivism on Happiness, features interviews by talk show host Dave Rubin with seven Objectivists — four philosophers, an internationally known speaker, a psychologist and a notable businessman — offering big-picture perspectives on what happiness is and how to achieve it.

The twelve episodes contain just over nine hours of interviews filmed in the studios of The Rubin Report. “Dave is a very talented host who has brought back and reinvented the long-form interview format on YouTube,” Tsfany observes. “He’s an intelligent, engaging and highly professional host who brings out the best in his interviewees and makes any conversation interesting, fun and flowing.”

Says Rubin: “This series is exactly what my show is about — put your ideas out there and see if they’re up to snuff. My audience loves hearing about ideas, exploring new thoughts, seeing what works, what doesn’t, and figuring out why people think the way they do. The fact that ARI wants to get their intellectuals out there and into the battle of ideas is a great thing.”

“My hope for this series is that people will forward the videos to someone who might be interested and help us spread the word that Objectivism is the best philosophy for living on earth.”
The series starts with an in-depth exploration of the nature of happiness and of Rand’s radical conception of its roots and requirements, addressing questions such as: What is happiness? Why is selfishness a virtue? What makes life worth living? Is morality grounded in facts? Do we have free will?

Later episodes tackle some practical implications of Rand’s approach: How to take happiness seriously, how to fill your life with meaning, and how to apply Rand’s ideas in business, society and politics. Through the series, the underlying theme is why Rand’s ideas matter if your goal is achieving happiness.

“People really loved these interviews,” says Rubin, “which didn’t surprise me. Many Objectivist ideas are things I’ve incorporated into my life and business. I’ve openly talked about that, and the audience has been on the ride with me.”

Reaching individuals who are open to persuasion when it comes to Rand’s ideas is Tsfany’s goal. “We want Objectivism to become a known, relevant alternative to other prominent philosophies. My hope for this series is that people will forward the videos to someone who might be interested and help us spread the word that Objectivism is the best philosophy for living on earth.”

Brook sums up the main theme in episode 9 of the series: “It’s easy to get caught up in the politics, but what’s really important is how to live the best life that you can live — how to achieve happiness — how to find a great romantic partner — how to enjoy good art — how to have great friends — how to pursue a great career — how to live a full, complete, whole life. That’s what her philosophy is all about, and I wish the discussion out there about Ayn Rand was focused on that.”

A complete episode list appears at the end of this article. Meantime, here are a few short video highlights: