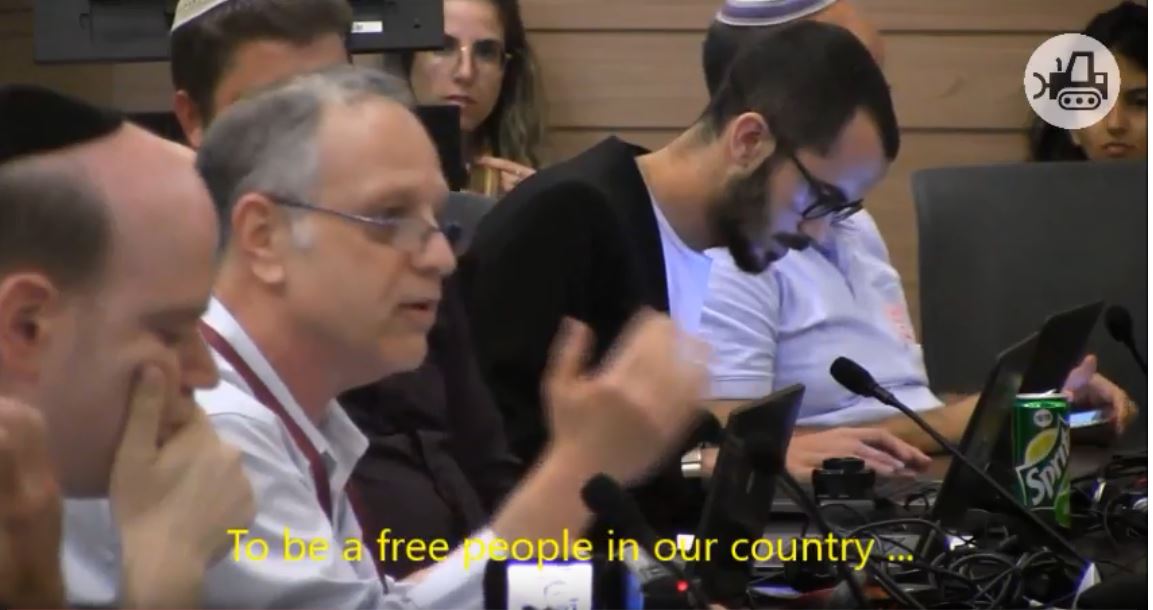 The resonance of Ayn Rand‘s ideas is truly global. That’s evident, for example, in the rapidly growing sales of Rand’s books outside of North America, and in the public events featuring ARI speakers across Asia, Latin America, and Europe. A fascinating case study is Israel, where since 2013 ARI has had an affiliated organization, the Ayn Rand Center Israel.

There are at least two impressive stories to tell about the Ayn Rand Center Israel.

The first (which I’ll just mention) is about the Center’s work to raise awareness of Ayn Rand’s ideas and writings among students, in the media and within Israeli universities. In a marquee annual event — linking Rand’s celebration of production, innovation and trade — the Center gives out the Atlas Award to the most promising Israeli startup. The event generates a lot of buzz. That’s one amazing story, summarized on ARI’s Impact Today blog.

The second story — my focus here — has to do with the political activism of the Center’s director, Boaz Arad. It’s a heartening story about how one activist, inspired and informed by Ayn Rand’s ideas, is advancing the cause of individual freedom by working to overturn an irrational policy. Boaz is fighting to end Israel’s policy of compulsory military service.

In the United States and many other countries, military conscription has been phased out. But Israel is an exception. For Americans, the military draft is now, thankfully, a distant memory. Ayn Rand was a fierce opponent of the military draft, which she regarded as immoral. She argued that it is a profound violation of individual rights. I share her view, and in my book on America and the Israeli-Palestinian conflict, What Justice Demands, I point out that Israel is unique in the Middle East because it is a basically free country, but also flawed in various ways: its policy of compulsory military service is a prime example.

When I heard about Boaz’s activism to end military conscription in Israel and the inroads he’s making, I called him to find out more. Here’s a transcript of our conversation, condensed and lightly edited.

Elan Journo: Boaz, let’s start with some history. How did Israel’s policy of military conscription come about?

Boaz Arad: It began in the context of the war over Israel’s independence in 1948–49. When the British government’s rule over the area ended, after World War II, Israel was confronted by the invading forces of at least five nearby Arab regimes — Jordan, Lebanon, Egypt, Syria, Iraq. When the war began, the nascent state had volunteer defense forces; once Israel declared its independence, the government established a formal military, known as the Israel Defense Forces (or IDF). Israelis feared, with good reason, that losing this war would mean their annihilation. It was in that context that the government enacted a conscription model to raise sufficient military strength to defend against invading forces.

EJ: So Israel pulled together disparate volunteer militias into a formal army. Then came the policy of conscription?

The moral case, echoing Ayn Rand’s view, is that it’s a violation of individual rights to conscript people into the military. The second component is a practical point: A volunteer army works much better.
BA: Right, and the people who fought had good reason to volunteer, given the threats. By the way, one of the most moving stories from that period has to do with the establishment of Israel’s air force by volunteers from all over the world, mostly the United States. But the problem is that the policy of military conscription came about as a temporary solution that became permanent. It’s very difficult to change the law. Right now, Israelis are typically conscripted for two to three years, and then do annual reserve duty for several more years. But this law needs to change, and there are much better alternatives.
READ ALSO:  The Berlin Wall and the Evil of Socialism

EJ: Tell me about your activism regarding military conscription. How did that begin?

BA: I’ve opposed the policy for many years. One milestone occurred in 2010. At the time, I was a research fellow at the Jerusalem Institute for Market Studies. I wrote a paper proposing that Israel move away from conscription to an all-volunteer military force, a model now common in the U.S. and many other countries. And, as part of that project, we conducted a public opinion survey. We found that something like 18 percent of the Israeli population supported such a change to an all-volunteer army.

We also asked a narrower question, highlighting the fact that conscripts in the military end up both in combat roles and in many non-combat functions, such as kitchen staff, mechanics, medical personnel and so on.

EJ: When you framed the issue in that context, what did the poll show?

BA: When we pinpointed those non-combat and support roles, which are only indirectly related to defending the country, practically everyone was in favor of not conscripting people into doing, say, kitchen duty and instead having a volunteer force focused on essential military roles.

EJ: In your 2010 paper, what arguments did you present as an advocate for a volunteer army?

BA: It’s a two-pronged argument — one part moral, one practical. The moral case, echoing Ayn Rand’s view, is that it’s a violation of individual rights to conscript people into the military. In a free society, it’s wrong for the government to coerce your time, which is irreplaceable, and put you, against your will, in life-threatening situations.

The second component is a practical point: A volunteer army works much better. You need professional soldiers who are highly trained and skilled. Today’s military is so high tech and sophisticated that you need specialized people in key roles, those who have, say, 10–15 years’ experience. It’s not cost-effective to train conscripts to do such a job and to have them do it for one or two years, at which point they move on.

That wastefulness is bound to get worse. Given current birth rates and the typical annual intake of conscripts, in a few years, Israel will have a glut of military personnel. The army could grow to something like half a million to a million soldiers. There would be way more people than really needed to serve national security, and some will end up, as they do today, in non-essential positions like entertainment. Young men and women are conscripted into the military and, literally, end up doing magic tricks or singing as part of their military duty.

EJ: You mentioned that both men and women are conscripted, but are there any exceptions?

My hope is that we can keep pushing for a change in the law, so that in maybe in two to four years, we’ll see the end of Israel’s conscription model.
BA: Actually, there are a lot of exceptions, and that compounds the injustices of the conscription model. The law allows for a variety of exemptions, mainly for Jewish religionists and for members of the Arab community. The exemptions are a source of much friction within society. There’s frustration over the fact that some people are forced to give three years of their lives — but others are not. But, again, that friction is a completely avoidable problem if you adopt a volunteer-only military. There’s no question about who’s exempt and who isn’t. No one would be forced into it.
READ ALSO:  Philosophers Discuss: Is There a Right to Mass Protest?

EJ: You’ve been advocating changing the law since at least 2010. Where do things stand today?

BA: There’s been some real progress. The position I’ve been arguing for is getting a hearing in the Israeli parliament, the Knesset. For example, just this summer, in July, I spoke at a committee meeting that was considering the question of Israel’s conscription model. There were politicians who made the case that conscription is neither compatible with a free society, nor practical. There are other changes happening too: the length of military service is getting shorter.

EJ: What’s the public sentiment on this right now?

BA: Remember that back in 2010, we found public support for a fully volunteer army was about 18 percent. The Israel Democracy Institute ran another poll recently, and found that 41 percent now favor moving away from conscription (and only 59 percent of the Israeli public consider that the IDF should remain “The people’s mandatory Army”).

EJ: From 18 to 41 percent in favor, that’s quite an uptick in just eight years.

BA: Yes. Soon we’ll run another poll, and I plan to use that to draw more attention to the case against conscription. One factor is that more and more people are fed up with the army’s inability to make effective use of conscripts, who end up in army jobs that waste time. The solution for that is not to conscript anyone, but move to an all-volunteer force. My hope is that we can keep pushing for a change in the law, so that in maybe in two to four years, we’ll see the end of Israel’s conscription model.

EJ: I wish you well, and thanks for your time, Boaz.