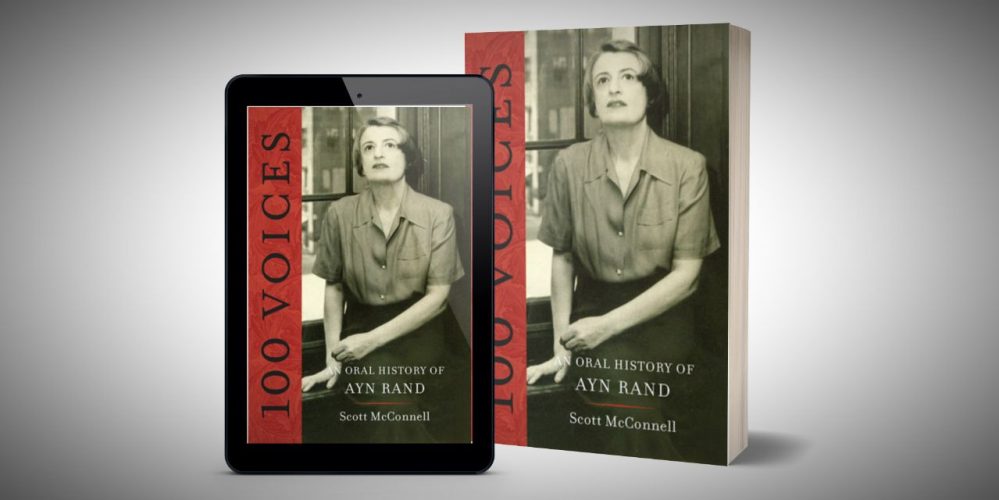 A hundred people who knew Ayn Rand offer details and insights about her personal life.

Much is known about Ayn Rand the public figure — author of The Fountainhead and Atlas Shrugged, creator of the Objectivist philosophy, iconic defender of reason, self-interest and capitalism. But less is known about her personal life. For those who are curious, a useful resource is 100 Voices: An Oral History of Ayn Rand.

In the pages of 100 Voices, readers can explore Rand’s private life in great detail from many different perspectives, through interviews with people who knew her — friends, relatives, neighbors, fans, collaborators and other professional contacts, ranging from typists and assistants to producers and publishers. We meet other artists who admired her work. There are even interviews with prominent figures who interviewed her.

A few of the interviewees’ names are recognizable: TV journalist Mike Wallace, musician Duane Eddy, movie producer Al Ruddy, Australian politician Malcolm Fraser, and actors Patricia Neal, Robert Stack and Racquel Welch. But the great majority are notable chiefly for their connection to Ayn Rand, and for their ability to illuminate little-known facets of her intellect, personality and lifestyle.

Some caution is in order, however. The quality of these interviews is uneven, as any raw biographical interviews are likely to be. And although each interviewee speaks primarily from firsthand knowledge, many were recalling events decades after their contact with Rand ended, so allowances must be made for the failings of memory. Moreover, it’s clear from the questions asked by the interviewer (and editor of this volume), Scott McConnell, that the goal was to draw out recollections, not to establish or challenge their accuracy.

Here are samples from some of the more interesting interviews in 100 Voices (with parenthetical references to page numbers in the book):

Harry Binswanger, who first encountered Ayn Rand as a student at a 1962 lecture she gave at MIT, went on to become an associate of hers and finally a close friend. He is the author of How We Know: Epistemology on an Objectivist Foundation and a longtime member of the Ayn Rand Institute’s board of directors.

Every interaction with Ayn, every chance to talk to her was a thrill. Even being edited by her — which was at first an intimidating prospect. But as it turned out, she was always considerate, even once when she thought that a draft of an article I gave her was hopeless and I needed to start over from the beginning. She was very considerate of my situation, knowing having to start over would be painful to me. She was affirmatively kind. And a better article did come out of it. (597)

If she was making a snack for us or washing the dishes, she gave her full attention to that. She would talk with me while she was doing it, but I could see those eyes riveted on what she was doing. She would not do things with less than full concentration. She was always intense. (577)

“Now, you know, it’s late and it’s dangerous” or something like that, in expressing concern about something that could happen to me on the way home [in New York City]. Just a slight apprehension. . . . She was consciously on the premise that you should do everything you can do to make sure that nothing bad happens in that way. (578)

Allan Gotthelf met Rand in the early 1960s when he was a student and beginning teacher. He went on to teach philosophy at The College of New Jersey and the University of Pittsburgh and coedit A Companion to Ayn Rand.

I had a conversation with her once about something that was really very private, but I’d like to mention it because it’s indicative of her approach. I felt I had betrayed her in a certain way. When I called to tell her, I obviously was distraught. And there was just one thing she wanted to know, and I said, “No, I didn’t do that.” And she said, “Oh, okay.” What I want to get at was that she was very sensitive psychologically. She saw what I was doing and some mistakes that I was making, . . . And she went to the philosophical principles that were relevant. It was as if she were targeting it to a place where I could understand it. She said, “You know, you’ve got a Hegelian premise. You’re expecting yourself to know everything before you know anything.” And I understood right away what she was referring to.

So first she wanted to know if I had done something that she would consider immoral or a betrayal. Once it was clear that I hadn’t, the decks were cleared. (342–43)

One of the most important things about her as a person is that she was always the same no matter where she was — whether it was at the ‘21’ Club or at a street fair — no matter who was there or what the subject was. She was the only person I have ever met in my life whom you could count on in that way. . . . She was always the same, whether she was going to some fancy place or cooking dinner or walking around in a housecoat or in the presence of celebrities. (385–86)

She always explained everything she said. If you were at all baffled or didn’t understand something or even if there was a quizzical look in your eye, she would always give reasons for everything, fully, concisely. The two characteristics in her judging people . . . are: are they honest and serious about ideas, intellectual? That’s how she dealt with people and that’s how she dealt with me. (383)

In her study, where she spent the most time, were her desk and bookshelves. I told you about her shelf unit with all her precious collection of lions and rocks. The room was always a mess. She didn’t want it to be messy, but she never got around to straightening it out, because she was always writing something. (399)

It’s probably kind of hard for you to picture, but we were friends. Not only was I a fan of what she was doing, but I was a fan or hers personally. But what surprised me was she initiated our meeting, because I never would have thought that she would enjoy the kind of things I was writing. But she did. And she said she always enjoyed reading the work of Mickey Spillane because I was never gray. It was either black or white. . . . [We had lunch] in a very fancy Belgian restaurant in New York City in September 1961. It was so hoity-toity that they only stayed open for a couple of hours a day, and they had a very high-class group of waiters — very intellectual. Lunch started at eleven, and we met then, and before we got finished, that place was jammed with reporters and people. We didn’t leave there until about seven at night. By that time, all the waiters and whatnot in that restaurant had got into a circle around where we were yakking away, and they were just sitting there listening. Oh, it was incredible. (232)

It wasn’t the case that we were professional friends. We were friend friends. There was a lot of laughing together and we had a good time talking about things. There was nothing really deeply serious about our conversations. We weren’t discussing world problems. . . . It’s just that we enjoyed each other’s company. (233)

Eloise Huggins was housekeeper and cook for Rand and her husband, Frank O’Connor, from 1965 to 1982.

Because I was so closely connected to her in very personal ways, especially after she became ill, she depended on me. She leaned on me a lot. I sort of saw her as a person, not famous, not as Ayn Rand. I saw her as just a regular human being who had feelings and needs just like everybody else. (431)

She always slept late. . . . I didn’t get there until noon. They were not breakfast people, who would have a meal in the morning. She would always have a pot of coffee going and that’s all she needed, and he would have a cup of coffee. (434)

She loved Manhattan. She liked the progress of the building. It’s true Manhattan is kind of futuristic, but to me, it is not holy. You can get lost in those apartment buildings, and they are so impersonal. But she loved everything about Manhattan and the building and everything. When we went on walks, she just would hold my arm, and she would walk very slow her last days, and we walked very quietly without speaking. (444)

She wasn’t afraid [of death]. She was not down, because she always thought when it comes, that is the end of everything. Your brain goes and you don’t know. You never wake up. And that is what she believed. She reached that state in her mind where she accepted the fact that she will be no more. (449)

For the reader interested in pursuing the subject further, indispensable perspectives on Rand’s private life are offered in “My 30 Years with Ayn Rand: An Intellectual Memoir,” by Leonard Peikoff, reprinted in The Voice of Reason: Essays in Objectivist Thought; the concise biography Ayn Rand by Jeff Britting; Facets of Ayn Rand by Charles and Mary Ann Sures; and the documentary films Ayn Rand: A Sense of Life and Ayn Rand in Her Own Words.