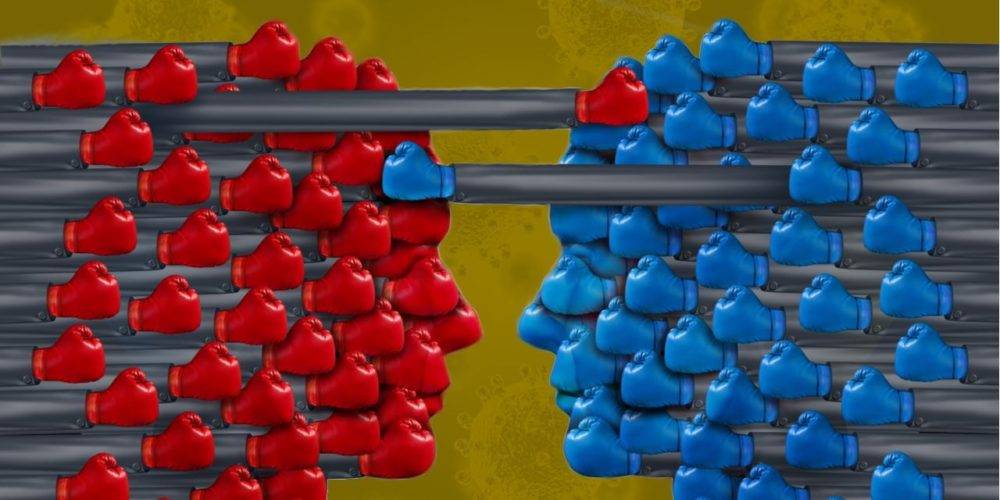 The Dangerous Thinking Behind Pandemic Partisanship

Partisan loyalty about current medical and political controversies is driven by defensive false-choice thinking, not evidence.

President Trump stirred up a controversy first by touting the use of hydroxychloroquine to treat Covid-19, and then by musing about the use of UV light and even disinfectant to cure the disease. The way some have defended Trump’s speculation has served to spotlight a dangerous strain of partisan loyalty at work among many of his supporters.

But this tribalism that insulates itself from evidence is a contagion from which neither side of our political culture is immune. It infects not only the debate about how doctors should cure Covid-19, but also how governments should seek to contain it.

The thinking behind a partisan medical controversy

The controversy about disinfectant laid bare how some of the President’s supporters have been driven by blind loyalty, not a concern for evidence and truth.

The promotion of hydroxychloroquine followed the same pattern: partisan cheerleading, not evidence, is what empowered the trend. Supporters of the drug did cite anecdotal evidence of patients who had recovered after taking the drug.2 But because most people with Covid-19 recover anyway, these reports did not present serious evidence of causation. Only careful randomized control trials using large and representative samples give that evidence, and none of these had been done when social media first lit up about the drug.3 What had occurred was a media campaign by Fox News, which was then taken up by the President.4

False choice thinking can be a symptom of a deeper defensiveness.
What explains this political tribalism? The willingness to take refuge in a camp insulated from the facts is enabled by a specific kind of illogical thinking.

Consider how hydroxychloroquine boosters characterize their opponents and critics. For instance, the boosters spread a rumor that state governors had issued an outright ban on the drug. This isn’t true: these states prohibited outpatient prescriptions to preserve supplies of a drug that provably treats lupus, but they allowed inpatient prescriptions for those being treated for Covid-19. 5 Likewise, when I’ve pointed out the scant evidence for the effectiveness of the drug, its supporters baselessly pigeonholed my views. They said that I must think that no one should ever try the drug or be allowed to try it. But that’s not my view. I think people should have the right to try potentially life-saving drugs even when there are risks.

Both of these reactions involve a kind of false-choice thinking. One can think that doctors should be able to prescribe the drug, but also think prescriptions should not be given out indiscriminately. One can think that people should be free to try a drug but also think they should decide based on the evidence. One doesn’t have to choose between being an unqualified advocate of the drug and a categorical opponent. But partisans for these drugs argue as if there are only two choices.

READ ALSO:  Arguments for Lockdowns Misrepresent Economic Evidence
False-choice thinking can be a symptom of a deeper defensiveness. When a view isn’t based on the evidence but on some emotional consideration — like fear of one’s own uncertainty or hatred of others —  there’s an incentive to rationalize it by making it look like the only alternative is absurd. It’s a way of convincing oneself that one’s view is more rational than it actually is.

But, it’s a mistake to think that only Trump supporters can be diagnosed with this unhealthy way of thinking.

The same thinking at work in the lockdown debate

As there is a legitimate scientific debate about how doctors should treat coronavirus, so there is a legitimate debate about government’s role in containing it. It is fairly obvious that government can justifiably quarantine individuals with a threatening infectious disease. But statewide mandatory shelter-in-place orders are legally unprecedented. To justify them would require shouldering a heavy burden of proof. So we should expect and welcome criticisms of these orders.

Yet I’ve now seen advocates of statewide mandatory lockdowns accuse their critics of not caring if people die and of thinking that all social distancing should be abandoned. That’s another false choice. One can be concerned about both the destruction of livelihood resulting from the lockdowns and about the sickness and death wrought by the coronavirus. One can oppose widescale mandatory lockdowns and still think people should voluntarily engage in social distancing to the extent they can.

Advocates of the lockdowns who engage in such false-choice arguments should think seriously about why they exhibit the same defensiveness that the hydroxychloroquine boosters do. Do they support the lockdowns because of careful consideration of the evidence? Have they looked at scientific studies that demonstrate the superiority of widescale lockdown measures over campaigns for voluntary social distancing?

Could it be that many of those who support draconian mandatory lockdowns have also been motivated not by careful consideration of the evidence, but by fear of the disease and hatred of the politicians who oppose them?

It’s hard to believe attention to the evidence could be what is driving support for the lockdowns. I can’t find studies of lockdown effectiveness that have been widely publicized. Studies of the effectiveness of school cancellations, travel restrictions, assembly limits, and centralized quarantines are not studies of wide-scale lockdowns.6 Like the studies of hydroxychloroquine, the few studies of actual lockdowns that do exist are also not randomized control trials.7

Supporters of medical or political interventions both point to scant evidence of their effectiveness but argue that we don’t have time to wait for more. They should admit that their proposals are not based on adequate evidence; they are gambles. A gamble might even be rational if it doesn’t dismiss evidence of the dangerous side effects of the proposed intervention. But many on both sides have ignored evidence of these side effects.8

Could it be that many of those who support draconian mandatory lockdowns have also been motivated not by careful consideration of the evidence, but by fear of the disease and hatred of the politicians who oppose them?

If we want to salvage as much as possible of both our health and our wealth, we need creative solutions that see beyond the false choices we’ve been offered. To find these, we cannot be guided by fear or tribal hatred. We need level-headed, rational thinking aimed at figuring out what’s true, what’s effective, and what’s just — whether or not it fits a partisan agenda.