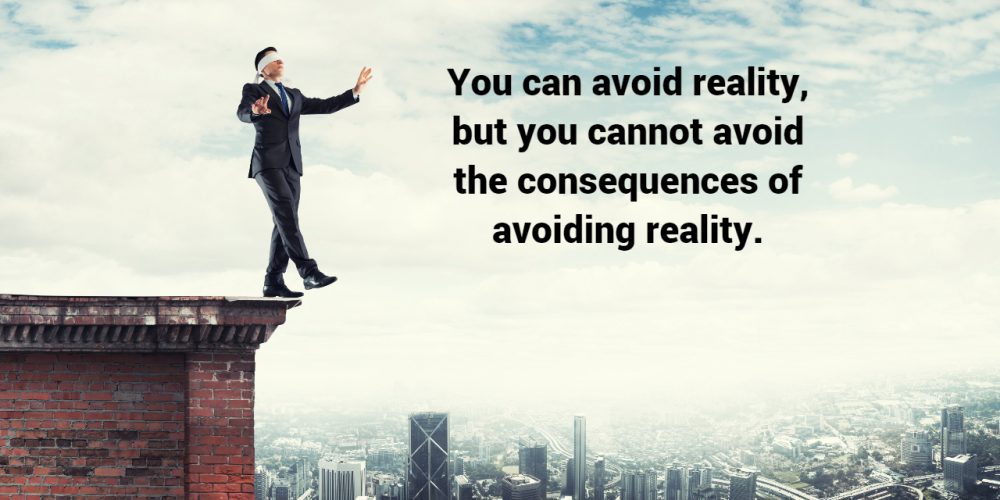 The Quotable Ayn Rand: ‘You Can Avoid Reality, But …’

The real origin and meaning of a popular quotation most people get slightly wrong.

One of the most popular quotes attributed to Ayn Rand is: “You can avoid reality, but you cannot avoid the consequences of avoiding reality.”

Many people find these words clarifying because they draw an important contrast between what’s under a person’s control and what’s not. “Yes, you can decide to ignore the facts of reality, since you have free will,” the warning suggests, “but the harmful effects of that decision will come back to haunt you later.” All of us can point to experiences verifying the truth of that observation.

Although Rand never wrote or said the exact words attributed to her, their sources probably lie in the following passages from her nonfiction writing.

Rand’s earliest statements on this theme came in 1961, in her seminal essay “The Objectivist Ethics.” There, she identifies man’s basic virtue as rationality, which entails the choice to face the facts of reality and act accordingly. By contrast, she writes, man’s basic vice is mental evasion, the choice to turn away from reality.

[Man] is a specific organism of a specific nature that requires specific actions to sustain his life. . . . That which his survival requires is set by his nature and is not open to his choice. What is open to his choice is only whether he will discover it or not, whether he will choose the right goals and values or not. He is free to make the wrong choice, but not free to succeed with it. He is free to evade reality, he is free to unfocus his mind and stumble blindly down any road he pleases, but not free to avoid the abyss he refuses to see. . . . Man is free to choose not to be conscious, but not free to escape the penalty of unconsciousness: destruction.

Each of the three boldfaced sentences (my emphasis) is a variation on the theme. Notice, however, that Rand speaks of choosing to “evade” reality, not “avoid” it. In her code of ethics, the concept of “evasion” refers to a mental activity, the choice to unfocus one’s mind. By contrast, the concept of “avoidance” denotes the (futile) attempt to escape evasion’s consequences — an impossibility. Rand would never say that you can avoid reality — only that you can avoid awareness of reality, which is what “evade” means. Thus the “quotation” commonly attributed to Rand fails to reflect her unique view of irrationality as a mental vice.

Two years later, in an article called “Collectivized ‘Rights’” (available in her essay collection The Virtue of Selfishness), Rand employed her basic insight to describe the cumulative effects of individual vice on an entire society:

Just as a man can evade reality and act on the blind whim of any given moment, but can achieve nothing save progressive self-destruction — so a society can evade reality and establish a system ruled by the blind whims of its members or its leaders, by the majority gang of any given moment, by the current demagogue or by a permanent dictator. But such a society can achieve nothing save the rule of brute force and a state of progressive self-destruction.

Once again, Rand is careful to use the concept “evade,” not “avoid,” to describe the mental vice of ignoring reality.

READ ALSO:  In Case You Missed It: Powerful Interviews, Talks from 2019

In 1971 she revisited this theme in “‘The Moratorium on Brains,’” an essay in the Ayn Rand Letter analyzing President Nixon’s imposition of wage and price controls on the U.S. economy. Drawing her title from a chapter in her novel Atlas Shrugged, Rand focused on the philosophical corruption that allows people to rationalize their evasion of reality:

It is Pragmatism that permits them to hope to avoid, somehow, the consequences of their own policies, to find a loophole in the law of causality, to have their freedom and eat it, too. Later, when they are trapped by the consequences they refused to consider, they will call for controls and more controls, crying that they didn’t mean it and couldn’t help it. This is the way it happened in other countries.

Here she uses the term “avoid,” properly, to describe the futile attempt to shield oneself from the existential consequences of moral failures.

Finally, in her 1973 essay “The Metaphysical versus the Man-Made” (available in her essay collection Philosophy: Who Needs It), Rand returned to her original theme, observing that each individual “has the power to suspend, evade, corrupt or subvert his perception of reality, but not the power to escape the existential and psychological disasters that follow.”

In this passage she expands on her original insight that man can “evade reality,” observing that this same power can be understood as a person’s choice to “suspend, evade, corrupt or subvert his perception of reality.” As for the consequences, she clarifies that the vice of evasion causes disastrous results not only “out there” (existentially) but also “in here” (psychologically).

Apart from these nonfiction sources, readers of Atlas Shrugged will recognize a theme that runs throughout the novel, which dramatizes on a global scale the unavoidable disasters that result from evading responsibility for thinking about the facts of reality. However, the nonfiction passages seem likelier to have inspired the “quotation” widely attributed to her in social media — a well-intentioned condensation that unfortunately loses some of Rand’s meaning in the process.

In closing, it’s worth noting a couple of widespread variations on the words attributed to Rand:

Since the term “ignore” is a fair synonym for “evade” in this context, these two variations are essentially identical. But like the “avoid” version analyzed above, both do subtle violence to Rand’s nuanced use of separate concepts for the epigram’s two parts. So, in these two variations, the first part is an accurate take on Rand’s meaning — but strictly speaking, the second part is false. According to Rand, you indeed can “ignore” or “evade” the consequences of your irrationality, because those concepts refer to shutting down your awareness of the facts. That is always an option, because you have free will. What you cannot do is avoid the existential impact of those consequences, which are objectively real regardless of your awareness of them.

Those desiring more clarity on these important questions may wish to consult entries in the Ayn Rand Lexicon, accessible using the Lexicon tab on the top menu at ARI Campus. Relevant excerpts from Rand’s own writings are gathered under the topics “Metaphysical vs. Man-Made,” “Causality,” “Free Will,” “Focus,” “Evasion,” “Justice,” “Pragmatism” and “Objectivity.”