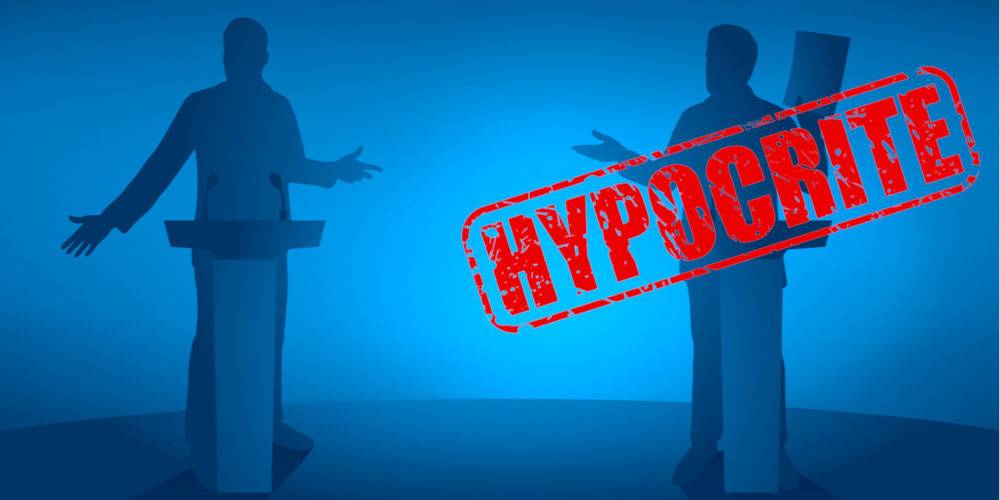 Hypocrites make easy targets. Pundits love to expose the preacher who advocates “family values” while secretly engaging in promiscuous behavior. Likewise the politician who pushes for higher taxes while cheating on his own returns. These days, charges of hypocrisy are flying in every direction.

A hypocrite is a liar who pretends to uphold a principle he doesn’t really care about. Since hypocrisy is a black mark on someone’s moral character, serious accusations should be based on understanding what the person’s principle means, what it requires in practice, and exactly how they betrayed it.

But in today’s political climate, we see far too many unserious charges of hypocrisy that don’t live up to these standards. Such accusations are especially misleading when used to unjustly impugn someone’s ideas.

For instance, Greta Thunberg has been accused of hypocritically betraying environmentalism. Even though she famously crossed the Atlantic in a sailboat to avoid burning fossil fuels, critics complain when she takes a train or uses devices made of oil-based plastic. Similarly, socialist activists who broadcast their protests online using the latest smartphones are called hypocrites for adopting the best products of capitalism.

Unserious charges of hypocrisy are especially misleading when used to unjustly impugn someone’s ideas.
And I’ve recently witnessed, close-up, the same form of accusation leveled against the organization where I work. At the Ayn Rand Institute, we defend laissez-faire capitalism and oppose welfare redistribution on moral principle. When people realized that we had accepted a Paycheck Protection Program loan — even though we publicly announced our decision well in advance — the Twitter mobs quickly gathered.

When we announced our decision, we also explained why we thought it was consistent with our principles. But those calling us hypocrites didn’t engage with our arguments or ideas. Instead they implied that neither we nor our ideas should be taken seriously.

How not to diagnose hypocrisy

Unserious charges of hypocrisy like these are based on nothing more than cursory observations of how someone’s actions might not fit with the accuser’s rough estimate of what their targets believe.

Consider Greta Thunberg. I have lots of reasons to criticize her, but potential hypocrisy is low on the list. It’s not obvious that she is a hypocrite: she might think that fossil-fueled travel for personal appearances actually furthers her ideals by convincing more people to buy carbon offsets. But even if she doesn’t fully live up to the ideal she wants others to follow, that doesn’t show that her ideas are invalid or impractical — even if other considerations do.

Before dismissing either the person or the idea, you need to understand what their idea is, their reasons for it, and what it would actually mean to act on it.
Or consider those iPhone-toting socialists. I have all kinds of objections to their ideas and tactics. But their use of capitalist products neither clearly shows their hypocrisy nor that socialist ideas are wrong. Marxists after all claim that capitalism sows the seeds of its own destruction by creating weapons for its enemies to use. And what about the socialists who “unplug,” live on co-ops, and would force the rest of us to do the same? If we think they’re wrong, we need to explain what’s wrong with their ideal in its own right.

Before dismissing either the person or the idea, you need to understand what their idea is, their reasons for it, and what it would actually mean to act on it. I object to Thunberg and Marx because I’ve studied environmentalist and socialist philosophy, identified serious flaws in the arguments for both, and observed the terrible real-world consequences of actually practicing them. You might disagree with my assessment. But my way of assessing ideas isn’t anything like the tactic of slinging too-easy charges of hypocrisy.

How unserious charges distract — and why they shouldn’t

Many of today’s unserious charges of hypocrisy aren’t merely sloppy. Too often they are a ruse to distract everyone from discussing substantive questions, a tactic to skirt around issues that the accusers don’t want to touch.

For instance, branding Greta Thunberg a hypocrite allows some of her accusers to skirt the moral question of whether they should revere her environmentalist ideal. It allows them to evade their sense of guilt about not practicing it, by claiming that it’s just impossible to practice. (Similar considerations apply to charging socialists with hypocrisy.) Wouldn’t it be more honest to face head-on the question of whether these ideals are actually rational?

Today’s unserious charges of hypocrisy are a ruse to distract everyone from discussing substantive questions, a tactic to skirt around issues that the accusers don’t want to touch.
I’d have a lot more respect for critics of my organization if any had attempted to understand our ideals and explain what’s wrong with them. ARI’s ideal upholds the individual’s right to be free to pursue his own happiness. We object to welfare redistribution because it forcibly expropriates one person’s resources and transfers them to others. That’s why we think that anyone who knows they have been victimized in this way has the right to restitution.

But I suspect that many of our critics are uncomfortable explaining why they think forcible redistribution is morally justifiable. To skirt that moral issue, they find it easier to argue that those who condemn the welfare state are simply hypocrites. That way there’s no need to engage with any arguments about the morality of redistribution.

But those are the arguments we should be having. What is the meaning and value of an individual’s right to the pursuit of happiness? Should we take it seriously as a moral ideal, or should we abandon it in favor of other ideals like a pristine natural world or the collective proletarian good?

Let’s push aside the too-easy accusations of hypocrisy and engage in real debates about the central philosophical questions of our age.