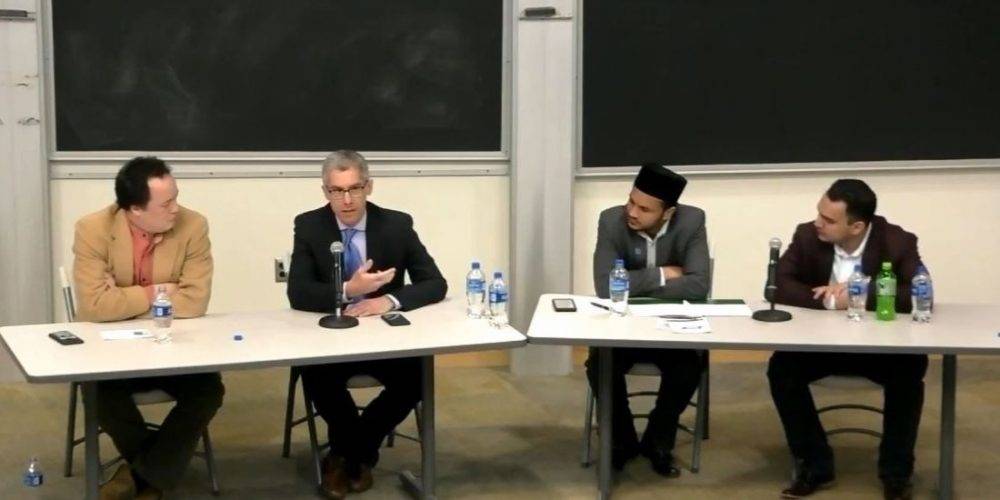 When I headed to the University of Rochester to take part in a panel discussion, I had no inkling of the campaign that some students had already launched to shut the event down. The reasons behind their opposition were revealing. In this one incident, concerning one event, at one campus, there’s a telling data point about today’s intellectual climate.

I went to Rochester to speak on a panel about the ideas behind ISIS, Al Qaeda and the wider Islamist movement in the Middle East. The panel also included Graeme Wood of The Atlantic magazine; Faisal Saeed Al Mutar, a secular activist and founder of Ideas Beyond Borders; and Adnan Ahmed, a writer and imam in the Ahmadiyya Muslim community. The event was co-sponsored by the Ayaan Hirsi Ali Foundation, the Ayn Rand Institute, and the campus College Republicans.

Before any of the speakers even arrived on campus, a petition to cancel the event had circulated among students. When the panel was about to begin, several student groups — Students for a Democratic Society among them — showed up to pressure the administration and the organizers to shut down the event.

Fortunately they failed. But they made their presence felt within the hall. Many attended the event, heckling at times; some stood in the back to protest with a sign; and they dominated the question period with mini-speeches and angry objections. Why? Why did they object to the panel? Why did they feel so passionately that this event, and this topic, did not belong on their campus?

You can pick up a few indications from the sometimes strident, sometimes furious questions (watch the entire video below). But I learned a lot more from my conversations with several of the students after the event, when all four panelists talked with the students at length outside the auditorium.

Initially, it seemed the main objection had to do with timing. The panel happened to be scheduled for March 21, six days after the massacre at two mosques in New Zealand. Several of the Muslim students explained that they were still grieving, and they viewed our panel on the Islamist movement as having been scheduled to make some kind of point, presumably implying an indifference to the New Zealand attack.

Except that our event was months in the planning. It was in early November 2018 that the organizer, Mohamed Ali, a student at Rochester, and I first discussed my taking part in the panel. Moreover, the panel itself began with a moment of silence for the fifty Muslims murdered in New Zealand, and the first topic we discussed was the evil of white supremacy and anti-Muslim bigotry.

One objection was that because the panel focused on the ideas of the Islamist movement, not the students’ doctrinaire view of American policy, the panel did not belong on campus.
Beyond the issue of scheduling, which we addressed during the panel and later, there were other objections. Several students mentioned that the event was co-sponsored by the College Republicans club. None of the speakers, however, is in any way affiliated with the Republican Party or that student club. The issue, it turned out, was that a former president of that club had recently been caught distributing white supremacist flyers in a nearby community. But he had left the club the previous school year, the club’s current leadership had publicly disavowed him, and all the speakers on the panel were clearly and vocally as opposed to white supremacism as they were to the Islamist movement.

After listening further to the students and probing their views, I took away two core objections of a more substantive nature. Neither is defensible, and both reveal the impact of certain destructive views prevalent on college campuses today.

READ ALSO:  Sam Harris and Maajid Nawaz in Open Conversation about Islam
The first: the protesting students’ own campus clubs — including the Arab students association and the Muslim Students’ Association — had not been involved or consulted in advance. If they had been, they would have not pushed back on the panel. To understand the views of students, I put aside the implication that these groups were entitled to be involved. OK, I asked one of the club leaders, what kind of involvement or role would they have wanted? How would the panel have been different with their involvement? What issues did they want to see discussed?

The event’s agenda, she said, would have to explore “US imperialism” in the Middle East and the consequences of America’s foreign policy, which she and several other students held to be the main, if not the exclusive, causal factor explaining the Islamist phenomenon. By the time she had finished describing her view of what such a hypothetical event would have looked like, it was clear there was little room, if any, for an exploration of the ideas behind ISIS, Al Qaeda, and the rest of the Islamist phenomenon. What she outlined would have been an entirely different event, with the Islamist issue marginalized if not elided, and the focus squarely on her interpretation of America’s role in the Middle East. (Let me note that while I’m also critical of US foreign policy in the region, albeit for different reasons, it’s false to view the Islamist phenomenon as essentially motivated by political grievances against American policy.)

The other objection was that the panel discussion was fundamentally illegitimate because it didn’t include acceptable racial/tribal “representatives.”
Essentially, the objection was that because the panel focused on the ideas of the Islamist movement, rather than aligning with the students’ doctrinaire view of American policy, the panel did not belong on campus. (Later, I learned that these student groups had indeed been invited to co-sponsor the event, but refused.)

The second core objection turned on the issue of “representation,” which came up during the Q&A but more pointedly in the discussions after the event.

Throughout the event, a number of students in the back of the room held up a banner that read “You Do Not Represent Us.” The full meaning of that claim became evident in later conversation with a few students. Mohamed Ali, who had organized and moderated the panel and was listening to this post-event conversation, has written an illuminating article at Quillette examining what happened:

After the event I overheard a student protestor berate one of the panelists and complain, inter alia, that the event had not been organized by an Arab. I interjected to inform her that I was the organizer of the event and that I am indeed an Arab. “You don’t count,” she immediately retorted. “We know your politics.” I subsequently discovered that she is president of the Arab student association. I was already aware of this practice of “Uncle Tom-ing” members of minorities who challenge certain orthodoxies, but this was the first time I had experienced it firsthand. Such attitudes were evident in many of the protestors’ objections to the event. Faisal Saeed Al Mutar—an Iraqi born secular rights advocate and the only Arab on the panel—bore the brunt of these attacks. He was denounced as a puppet and a traitor for discussing the role of religion in motivating groups like ISIS in his native country.

Particularly distasteful was the insinuation that race is not simply a descriptive category, but that it is thought to require certain duties of, and impose certain prerogatives upon, the individual. To retain one’s status as an “authentic” Arab (or member of any other “marginalized” demographic), one has to believe certain things. Because I had organized this discussion, I was rendered persona non grata among those who insist we turn a blind eye towards atrocities committed in the name of Islam. Investigating this matter at all apparently constituted a betrayal of my tribe, the punishment for which is excommunication. I’ve come to call this attitude “prescriptive racialism”—the notion that racial identity should determine how people act and what they believe. To be accepted as an Arab, I must adopt the same politics as all other Arabs.

Ali goes on to point out incisively that this racial/tribal mindset also pervades the outlook of white supremacists. His article is well worth reading in full.

The upshot of this “representation” objection is that our panel discussion was fundamentally illegitimate because it didn’t include acceptable racial/tribal “representatives.” The non-“representative” organizer and non-“representative” speakers had no standing to engage with these issues, a standing possible only to relevant tribal members. Therefore, the ideas and views we panelists put forward that night must be silenced.

Both of these objections reflect aspects of a tribalist mindset. The one treats views opposed to its dogmas as illegitimate; the other stresses collective identity as defining one’s views. Both are fundamentally anti-intellectual. Such an outlook is pernicious, especially so on a college campus, where students come to learn about and explore new ideas. And it is this anti-intellectual outlook that students are encouraged to adopt.

From one perspective, though, the incident at Rochester reinforced the importance and value of the panel discussion, which brought out important points for understanding the Islamist movement as an ideas-driven phenomenon.