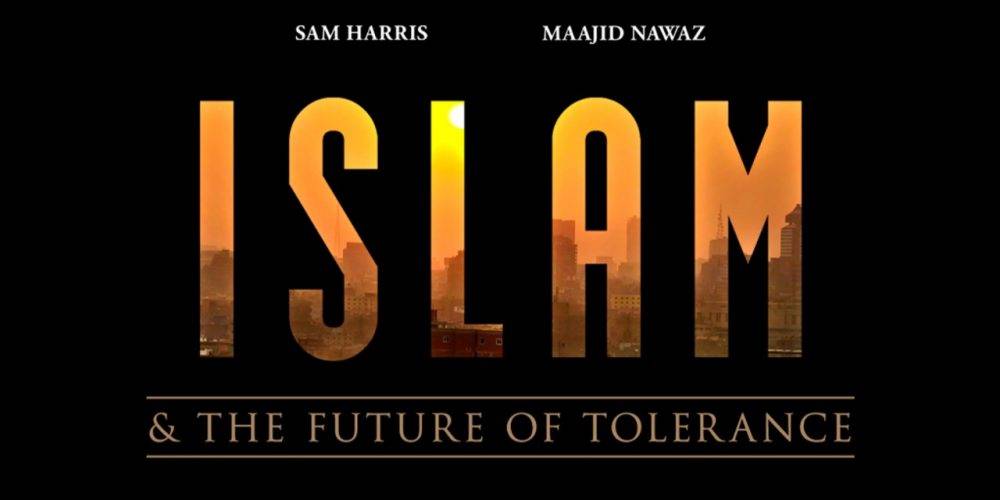 Sam Harris and Maajid Nawaz in Open Conversation about Islam

The new documentary “Islam and the Future of Tolerance” sheds much needed light on an issue engulfed in ignorance, confusion, taboo. The film centers on Sam Harris, an atheist intellectual, and Maajid Nawaz, a former Islamist turned reformer, who engage in a serious, frank, even brave, conversation on Islam, the Islamist threat, and attempts to silence discussion on these issues.

That the documentary was made at all is in itself remarkable. It was funded, not through the backing of any major TV network or well-known production company, but thanks to scores of individuals who chipped in to a Kickstarter campaign. Such campaigns typically offer backers some form of public recognition and thanks. But according to Suzy Jamil, the producer, members of the filmmaking team and some backers “were concerned about privacy and security.” A number of contributors asked to have their first, last, or full name withheld from the film’s website. And the end credits, which also thank individual funders, list numerous names that are blanked out. It’s an eloquent illustration of the climate of fear that surrounds the subject of Islam.

Such fear is understandable in the post–Charlie Hebdo era. In a note to supporters on Kickstarter, the filmmakers wrote that, given the documentary’s subject matter, “we may end up being targets. That’s a risk we are willing to take.”

Let’s salute them for taking that risk. The documentary makes several important points that help us think more clearly about the Islamist phenomenon, its connection to the religion of Islam, and how discussion of these issues is muzzled.

At the outset, Harris and Nawaz challenge the emerging taboo about discussing Islam. They reject the widely held idea that criticizing Islam is inherently racist or “Islamophobic.” Clearly racism against Muslims is a real phenomenon, and it’s true that many view Islam as a kind of tribal/racial identity. But there’s an essential difference between that and the documentary’s purpose: to analyze the religion of Islam as a set of ideas and to consider how those ideas shape the actions of its followers.

Distinct from Islamists is a far larger community of Muslims, whose level of religious commitment varies. Many of them, Nawaz argues, should be called “socially conservative Muslims.” In contrast to Islamists, they are not seeking to impose a political vision defined by religion. But, in line with religious teachings, they share many of the same sentiments of Islamists. Such “socially conservative Muslims” typically believe, for example, that homosexuality is wrong, that criticism of Islam is blasphemous, that women must be subservient to men (it is in such communities that the horrific practice of “honor killings” can be found). Nawaz insists that the views of “socially conservative Muslims” must be challenged. He counts himself a Muslim reformer, a tiny minority group on the margins.

Reformers, he says, recognize openly that there are “troubling passages” in scripture that need nuanced interpretation, and that within Muslim communities there are theocrats who must be challenged. Nawaz believes that Islam can be interpreted to accommodate itself to the principles of a secular, free society. To foster that way of thinking, he started an advocacy organization, Quilliam, and one of its activities is to present reform-minded interpretations of Islamic scripture.

This issue of how to understand religious scripture, particularly the Koran’s endorsement of holy war and barbaric punishments, sets the stage for one of the highlights of the documentary. It’s one of the points on which Harris and Nawaz differ most acutely (their initial, in-depth exchange on this issue can be found in a 2015 book, which shares the same title as the documentary).

Nawaz takes the position that interpreting a religious text requires a sensitivity to its context, cultural setting, and intent. For example, he considers the Islamic dogma that calls for banning alcohol. He points out that the language in the text uses a term that originally referred not to all forms of alcohol, but just to grape wine. So, the apparently literalist reading of groups like ISIS, which ban all alcohol, ignores the literal meaning of the text in its original context. Or take the Islamic injunction to cut off the hand of the thief, which Nawaz acknowledges is “problematic.” Admitting that his approach may seem like an intellectual contortion, he suggests that one has to be sensitive also to the possibility of the metaphorical meaning of a text, which here (presumably) takes “hand” to mean something like a motive or power, rather than an actual hand.

Against that approach, Harris pushes back, and he offers a perspective that gets at something true and important. The problem for “moderates” in any religion and especially in Islam, he argues, is that they’re left to read the text selectively, reinterpreting or ignoring the barbarous parts of their scripture, in the light of views that come from outside influences, not the text. By contrast those he calls “fundamentalists” read a text in a more complete, consistent, honest way, neither ignoring any part of it, nor reinterpreting it. Islam has views of martyrdom, jihad, blasphemy, apostasy (leaving the faith), and the moral worth of women, Harris argues, that are deeply inimical to a modern civil society. The problem, he says, is that the doctrines of Islam are not endlessly susceptible to reinterpretations that defy the literal, plausible understanding of the words on the page.

Belief in Islam commits you to its doctrines, and, Harris stresses, your beliefs shape your actions.

To make that point today, however, takes courage, and it invites all manner of dishonest criticism and smears.

Near the end of the documentary, Harris and Nawaz circle back to take a wider perspective on the taboo around discussions of Islam. Both are adamant about the importance of defending freedom of speech and, in particular, discarding that taboo. The “Islamophobia” epithet, Harris argues, is calculated to shut off honest debate, so that the needed analysis of the Islamist phenomenon is pushed to the margins.

READ ALSO:  New Scholarly Article: James Lennox on Rand's Atheism
The illuminating point that emerges from the documentary is that we should understand the Islamist movement as defined fundamentally by its ideological ends, rather than its means. Click To Tweet

Harris goes on to level a trenchant criticism of what he takes to be a “liberal” premise, though it’s likely more widespread. It’s the premise of discounting the role of ideas — particularly religious belief — in shaping human action. This manifests, for example, in how some people try to explain a Muslim suicide bomber. They imagine that the perpetrator must be the victim of oppression, since only that could drive someone to take such drastic action, and then they go on a hunt for an oppressor. The counterpoint, Harris observes, is that you can find cases of Muslim suicide bombers who were never subjected to oppression. Dropped out of that perspective, Harris notes, is a recognition of the power of belief in human action.

Whereas many in the West fail or refuse to grasp the power of ideas — particularly religious belief — this is precisely what both Harris and Nawaz both appreciate to a remarkable extent. The documentary “Islam and the Future of Tolerance” makes that point emphatically, and perhaps by its example of open, frank engagement with the issue of Islam, the film will exert a salutary impact on the culture.

(The documentary is streaming at Amazon, iTunes and Vimeo.)