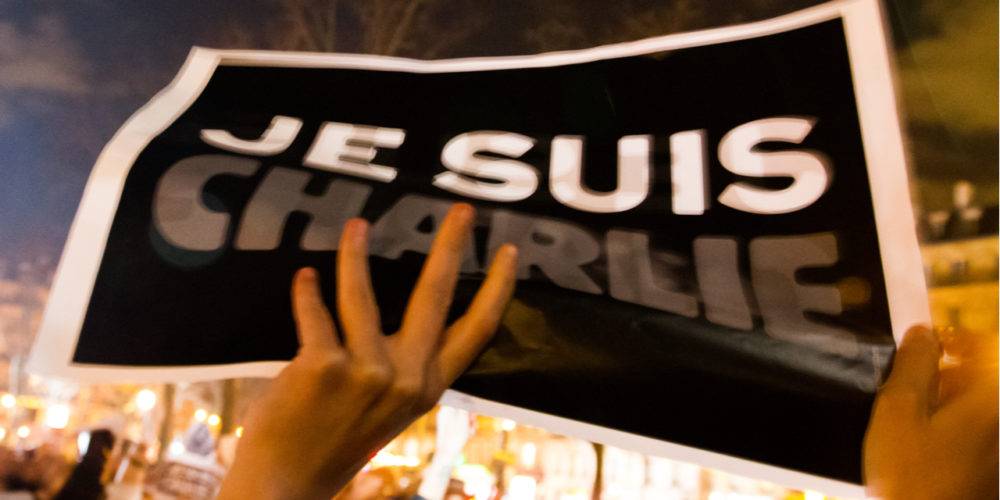 “We are living under siege, in Paris, in 2020,” said Fabrice Nicolino, a journalist who survived the massacre at the magazine Charlie Hebdo. Speaking at the trial of the alleged conspirators in that massacre, Nicolino decried the fact that the magazine now operates under heavy security: “What we are enduring, you aren’t interested in it.”

In 2015, Islamists burst into the offices of Charlie Hebdo and, with seeming military precision, executed eleven people, including the editor and many of the publication’s leading cartoonists. The magazine had published a cartoon of Muhammad. The gunmen had come to “avenge the prophet.”

To mark the opening of the trial in September, Charlie Hebdo republished the notorious cartoons of Muhammad. In an editorial, it stated: “We would have found it unacceptable to start this trial without presenting them to our readers and to the public. . . . These cartoons are part of history.”

Several weeks later, a man wielding a meat cleaver went to the former offices of the magazine (unaware it had relocated) and stabbed two people he thought worked there. Denouncing Charlie Hebdo’s republication of the Muhammad cartoons, he admitted to police that he planned to set fire to the building.

While the trial was ongoing, in north Paris on October 16, a young Islamist attacked a middle-school teacher, Samuel Paty, and beheaded him. Paty had shown some students one of the cartoons that appeared in Charlie Hebdo — “during a moral and civic education class discussion about freedom of speech.”

A young Islamist attacked a middle-school teacher, Samuel Paty, and beheaded him. Paty had shown some students one of the cartoons that appeared in Charlie Hebdo — “during a moral and civic education class discussion about freedom of speech.”
What’s the climate today for freedom of speech, specifically on the topic of Islam, in Europe? What can we make of the response of European governments?

To understand the situation, I talked to Flemming Rose, a journalist and author of The Tyranny of Silence. In 2005, he was an editor at the Danish newspaper Jyllands-Posten when it commissioned and later published cartoons on the subject of Islam to assess the seeming climate of self-censorship. That decision led to boycotts, deadly protests, and a global crisis. Al Qaeda put Mr. Rose on a hit list, and today when he leaves home, he must be accompanied by bodyguards.

We talked about the “cartoons crisis,” which has become shrouded in misconceptions, the worldwide protests and boycotts that ensued, and the massacre at Charlie Hebdo (it had republished the Danish cartoons in support of freedom of speech). Following that attack, millions flocked to the streets of Paris to show their solidarity with the murdered journalists, declaring on banners, “Je Suis Charlie” (“I am Charlie”). What became of that visceral outpouring of support in the years since?

The Charlie Hebdo massacre and subsequent attacks have stoked fears about some Muslims in France rejecting the country’s principles of secular government and free speech. The French president, Emanuel Macron, has expressed concern about “Islamist separatism”: Is this a significant phenomenon, I asked Mr. Rose, and what’s his view of the French government’s approach to it?

Flemming Rose is a thoughtful observer. I found the conversation illuminating, but also chilling.

This episode was recorded on November 11, 2020. Listen and subscribe from your mobile device on Apple Podcasts, Google Podcasts, Spotify or Stitcher.