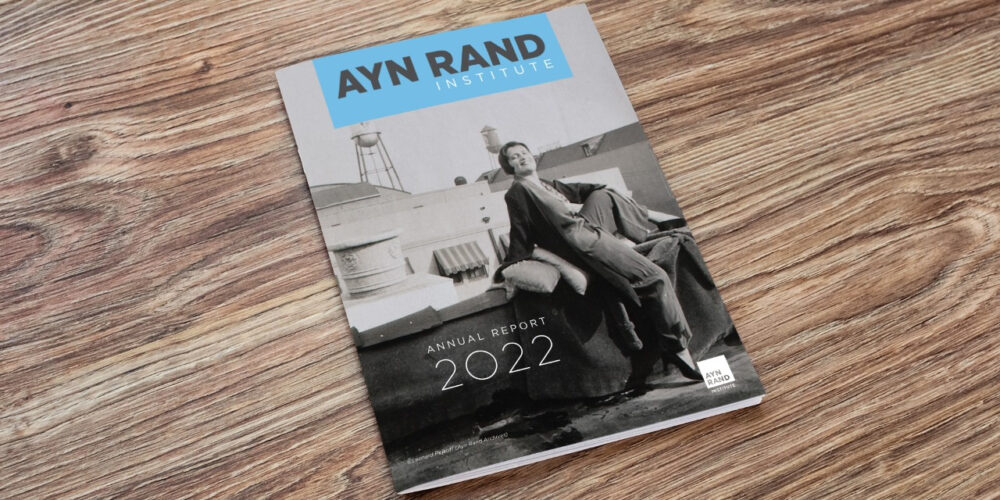 Rare Rand Essay on Painter Is a Highlight of Annual Report

Rand’s praise for José Manuel Capuletti is a highlight of ARI’s Annual Report 2022.

“Among the many values that art can offer, the subtlest one — and, perhaps, the most inspiring — is the sight of talent, talent as such, the spectacle of human ability actualizing its best potential,” wrote Ayn Rand. “In the presence of a great achievement, you feel as if you were seeing two art works: one is the object before you, the other is the artist who made himself capable of creating it.”

Such a spectacle — unexpected and startling in today’s context — was presented in New York City, at the Hammer Galleries, November 15–26, 1966. It was an exhibition of paintings by Capuletti.

José Manuel Capuletti is a young Spanish artist who started his career in Paris and gained his widest following in New York. Creative talent is always individual, it is not the product of any culture, it is that which produces a culture and moves it forward — but to the extent that one may detect certain dominant values in different cultures, one could say that the work of Capuletti has the passionate intensity of Spain, the elegance of France, and the joyous, benevolent freedom of America.

Later in her essay on Capuletti, Ayn Rand writes that his work “is enormously, overwhelmingly joyous; its irrepressible self-assertiveness has a quality of childlike purity and innocence — the innocence of the conviction that the sight of joy, of beauty, of achievement is a value to man, that values are a value to men.”

Rand’s illuminating 1966 essay — originally published in her periodical The Objectivist and not anthologized — is a major highlight of ARI’s Annual Report 2022, where you’ll find it reprinted in full.

The Annual Report, which is being sent to donors this month, showcases ARI’s recent progress in advancing our mission, including in-depth stories on the Ayn Rand University initiative and the new direction of the Ayn Rand Archives. We’re excited for you to read it — and we’re grateful to our donors, who make our work possible.

ARI donors receive printed copies of our magazine, Ayn Rand Today, three times a year, in addition to the Annual Report. Making a donation before the year’s end can offer tax advantages. We invite you to support ARI’s mission by becoming a member.