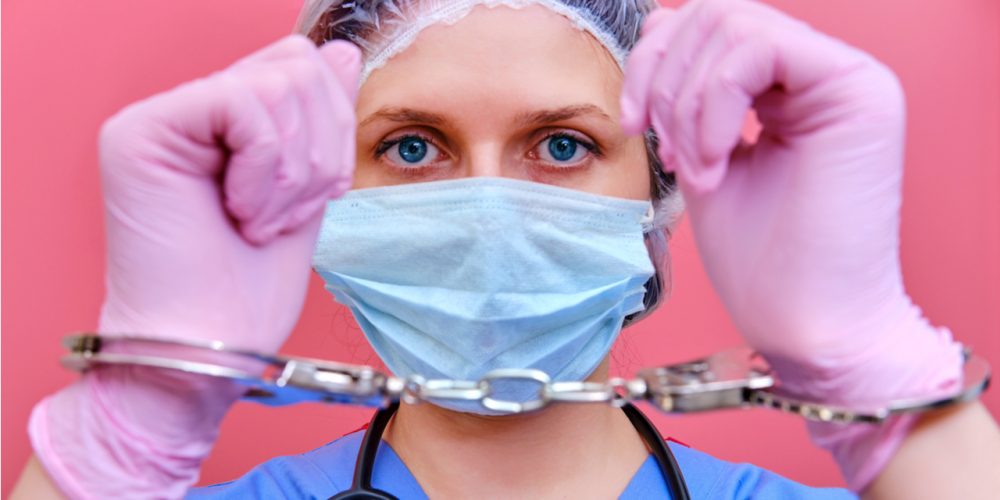 The Hospital That Tried to Shackle Its Workers

Health policy in the name of “the public interest” empowers the violation of health care workers’ rights.

The health care staffing shortage reached a fever pitch in late January in Wisconsin, when seven workers on a radiology team departed ThedaCare in Neenah for Ascension’s St. Elizabeth in Appleton. ThedaCare sued for an injunction to stop technicians and nurses from starting their new jobs. The workers — and many sympathetic onlookers — breathed a sigh of relief when the judge lifted the temporary injunction after only a weekend. But the case may be a sign of worse things to come, and not just for health care workers in Wisconsin.

What could possibly have led an American hospital to think they could succeed in chaining workers to their jobs — and be justified in doing so? It’s something deeper than what many suspect.

Critics of ThedaCare have alleged that its lawsuit was motivated by its greed for profit: it sought to maintain its Level II trauma status without paying its workers competitive salary or benefits. But of course Ascension and the workers were obviously motivated by their own interests, so it’s far from obvious that the conflict arose because of pursuit of self-interest on a free market. Ordinarily in a free market, when workers want better compensation, they’re free to strike or quit. This time, ThedaCare asked government to forcibly intervene on behalf of its alleged interests. By what right?

ThedaCare tells us in its brief against Ascension: “Ascension knew or should have known that this action would decimate ThedaCare’s ability to provide critical care at a time of critical need. Ascension chose to proceed anyway, prioritizing its own self-interests over the public interest.” It’s this legal cudgel of “the public interest” that allowed one side to claim that its “interests” trump the rights of seven individuals.

In announcing his decision to lift the injunction against the workers, Judge Mark McGinnis argued that ThedaCare had not proven that Ascension’s move would threaten the public interest, since the hospital could likely find replacement workers. But imagine if, in the midst of another pandemic surge, doctors and nurses threatened to quit a hospital lacking the resources to hire temporary help. On McGinnis’s analysis, these “at-will” employees without non-compete clauses in their contracts would lose the right to change jobs.

Critics may come to the defense of the rights of health care workers against hospitals like ThedaCare today. But as more health care workers quit the field, and as fewer come to replace them, how will these critics respond when hospitals again claim that “the public” demands their service, and voters claim that they have a “right to health care” that will be violated unless a doctor serves them? Everyone in this controversy agrees that the standard of the “public interest” should decide the fate of the workers, so what happens when the loudest voices say that workers’ freedom no longer serves that standard?

READ ALSO:  The Specter of Lawlessness Is Darker than You Think
It might be thought that “public interest” could never be so at odds with individual rights. Yet it too often is in other areas of policy, even when the interests that trump the individual are not as close to the alleged life or death stakes invoked by ThedaCare. In the infamous Kelo v. City of New London case, for instance, the Supreme Court ruled that a person’s private home could be taken by eminent domain for a “public use”: the city claimed that building a new Pfizer research lab would serve the local economy. And let’s not forget the Affordable Care Act’s individual mandate, which forced individuals to buy health insurance and was justified by its contribution to the “general welfare.”

As more of the health care industry is taken over by government, what happens when doctors’ and nurses’ own labor is seen as necessary for accomplishing some “public use” in the name of the “general welfare”?

The “public interest” cannot be reconciled with individual rights because the notion is inherently indefinable. Who is “the public” and what is its basic interest? Just as the city of New London claimed in Kelo, ThedaCare can claim that its “interests” represent “the public,” while Ascension and its supporters also claim the title for themselves. In reality there are just groups of individuals willing to let the state sacrifice the others to its alleged interests, with only a semblance of speculation about how their short-term interests affect “society.” This kind of legalized gang warfare has no place in a free society.

Today’s hospital systems, while nominally private, have already been forced by decades of legislation in the name of “the public interest” to burden doctors with regulations reducing the quality of care, arguably causing many doctors to quit. Those who remained were then left to battle the Covid pandemic with even less help, so it’s no surprise that even more are now quitting. Will our leaders now decide to double down on the doctrine that paved the way for this crisis, or will they stop to consider whether health care workers are not pawns of some higher social good, but individuals with inviolable rights?

Join author Ben Bayer on Clubhouse to discuss this article on Tuesday, March 22.