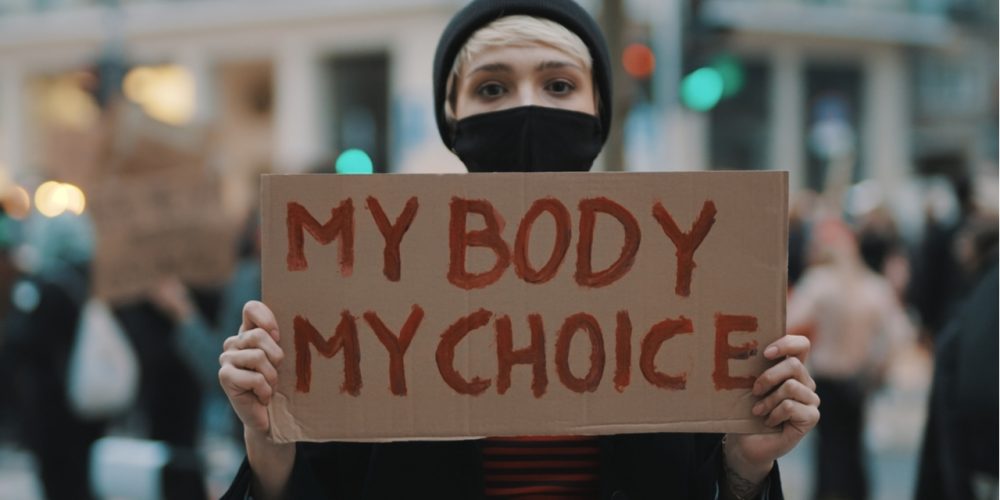 “My body, my choice” really does imply as powerful a rejection of vaccine mandates as it does of abortion restrictions.

For much of the pandemic, opponents of vaccine mandates have co-opted the abortion-rights slogan “my body, my choice,” frustrating abortion rights activists who tend to support the mandates.

This frustration is due in part to the apparent insincerity with which many mandate critics invoke the slogan, as an ironic comment on alleged liberal hypocrisy. But I’m an outspoken defender of abortion rights, and I’m here to argue without irony that the slogan implies as powerful a rejection of vaccine mandates as it does of abortion restrictions.

I’m also speaking as someone who’s fully vaccinated and who thinks far too many people aren’t. The value of the Covid vaccines for reducing severe disease and death is now indisputable, and there’s little evidence of anything but marginal side effects. The question isn’t whether more people should be vaccinated, it’s whether they should be forced to get the jab by law.

Supporters of the mandates typically brush aside the rhetoric of individual freedom and bodily autonomy because vaccines help protect other people’s bodies against a dangerous infection.

Let’s be very clear: people who choose not to get vaccinated might be making a mistake that will affect their own lives, but they’re not threatening others.

What threatens others is exposing them to actual infection. An unvaccinated person who takes other precautions not to get infected, or who, having become infected, takes precautions not to expose anyone, is not a legally recognizable threat. There’s especially no excuse for seeing an unvaccinated person as a threat in a situation in which testing is easily available.

For the law to treat someone as a threat without positive evidence that they actually are, is akin to the presumption of guilt over innocence. Compared to this, a controversial policy like “stop and frisk” looks like child’s play. Frisking doesn’t alter one’s biochemistry.

(Interestingly, the unavailability of testing at the beginning of the pandemic was itself due to FDA policies that denied our right to use the untested tools we had at the time to make decisions about our own health, another violation of the right to bodily autonomy.)

Of course, test results are never 100 percent reliable and people might not bother to get tested. But vaccines are also not 100 percent effective at preventing transmission, and people can fake compliance with mandates. Neither infallibly removes the risk of infection, but voluntary testing at least respects individual freedom.

In a system without mandates, even when an unvaccinated person is an infection risk, other individuals are still free to take steps to protect themselves. Precisely because vaccines are so effective, anyone who wants this protection can get it and be safe from serious illness. If that’s not enough, adding a mask virtually guarantees one’s safety, regardless of what others do.

READ ALSO:  We Can Protect Liberty While Combating Pandemics
Another way to protect oneself is to deal only with those institutions that require masks and/or vaccines. It’s only government-imposed vaccine mandates that violate individual freedom and bodily autonomy. Private institutions have the right to require vaccination as a condition of employment or entry. If you don’t like their condition, you can take your business elsewhere. Precisely because individuals have the right to bodily autonomy, they have the right to control the terms on which others get to interact with their bodies.

In the United States, there are no general national vaccine mandates. The Biden administration sought to impose a requirement of either the vaccine or negative testing on employers above a certain size, but this was struck down by the Supreme Court. Some cities mandate that private businesses use vaccine passports. Yet these impositions on businesses are as egregious a violation of individual freedom as when state governments impose laws requiring private abortion clinics to perform sonograms or provide anti-abortion propaganda to prospective abortion patients. In both cases, businesses should be free to decide for themselves the terms on which they’ll offer services to their customers. (By the same token, state laws that ban businesses from requiring masks or vaccination also violate their rights.)

You may say it’s unfair to compare mandating a simple injection to forcing a woman into labor. I’ll agree with you that laws against abortion are much worse infringements on bodily autonomy and individual freedom. But that doesn’t make forced vaccination any more acceptable. In the unlikely event that some politicians dared to pass a law mandating birth control for any woman who wanted to have sex, supporters of reproductive rights would vociferously oppose it too. The same principle rules out both the more and the less flagrant violations of bodily autonomy.

The right to bodily autonomy isn’t a talking point that’s the monopoly of one or another political tribe. It’s a principle that knows no partisan loyalty. And it’s a principle that derives its force from the more general principle that we should have the right to live our lives in the pursuit of our own happiness. This includes the right to make mistakes about what one’s happiness requires — as I think many who refuse the vaccines are doing. But it’s their life, and their choice.