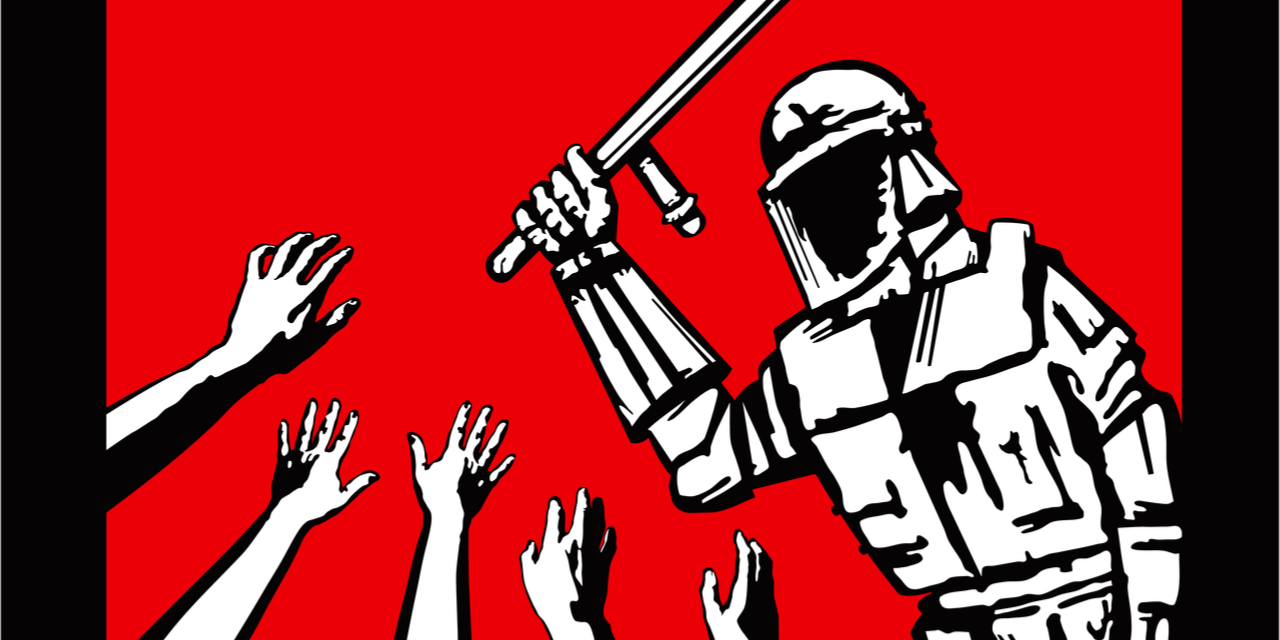 Would you recognize the signs of an incipient tyranny? Would you know how to oppose it? Timothy Snyder’s incisive book, On Tyranny, aims to distill enduring lessons from the twentieth century on the rise and functioning of tyranny — and to help us preserve our freedom. 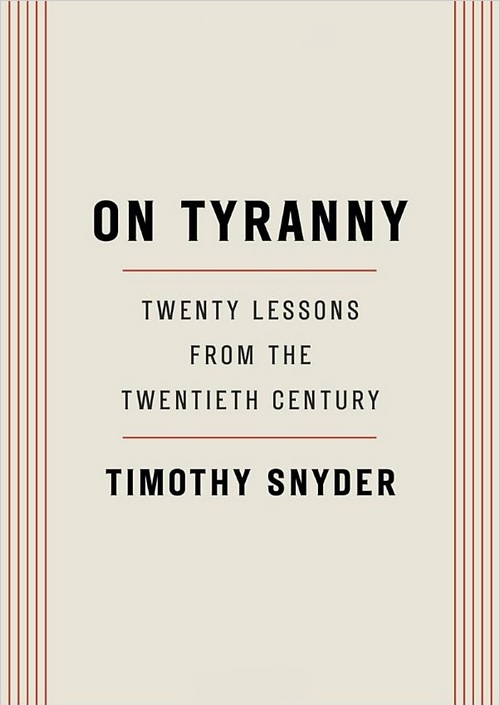 Would you recognize the signs of an incipient tyranny? Would you know how to oppose it?

Timothy Snyder’s incisive book, On Tyranny, aims to distill enduring lessons from the twentieth century on the rise and functioning of tyranny — and to help us preserve our freedom.

This short book is very much a product of the moment. Clearly Snyder, a historian at Yale, was impelled to write the book in the wake of Trump’s rise to power, a development he views as alarming. But no matter what you think of Trump, you can learn much from Snyder’s book. Its strength is in highlighting important features and mechanisms of the move toward dictatorship. Where it falls short is mainly in its advice on opposing tyranny.

The book’s format seems designed to connect with readers habituated to skimming social media feeds and to ease them into engaging with serious issues. It is a list of twenty punchy, at times poignant, lessons from history, rather than a sustained argument. This list-driven format is digestible and impactful, up to a point. A limitation — reflecting an overall weakness in the book — is that it implies that all twenty lessons are equally important, when in fact some are truly profound and enlightening, while others are less so, or not at all.

But if you zoom out slightly from that flattened list, and notice certain overlaps among the lessons, then Snyder’s most instructive points come into focus. The book illustrates three vital aspects of tyrannical regimes: their need for moral endorsement; their war on facts and truth; and their exploitation of crises (imagined, real, or exaggerated) to expand power.

By far the most arresting point in Snyder’s book, threaded across several lessons, relates to a citizen’s moral endorsement of incipient, and eventually full, dictatorial rule. Snyder begins the book by illustrating one form of that endorsement through what he calls “anticipatory obedience.” By that term he means adapting to new circumstances without reflection or independent judgment, and later not merely adapting, but conforming to what is expected by the authorities before being commanded by them.

For instance, Snyder writes that in 1938 “it was the Austrians’ anticipatory obedience that decided the fate of Austrian Jews.”

Local Austrian Nazis captured Jews and forced them to scrub the streets to remove symbols of independent Austria. Crucially, people who were not Nazis looked on with interest and amusement. Nazis who had kept lists of Jewish property stole what they could. Crucially, others who were not Nazis [voluntarily] joined in the theft. (18 – 19)

The “anticipatory obedience” of many Austrians, Snyder observes, “taught the high Nazi leadership what was possible. It was in Vienna that August [of 1938] that Adolf Eichmann established the Central Office for Jewish Emigration. In November, following the Austrian example, German Nazis organized the national pogrom known as Kristallnacht.” (19)

Another facet of the issue of moral endorsement comes through in a later lesson (“Take Responsibility for the Face of the World”). Snyder calls on readers not to turn away from, or accommodate themselves to, hateful images and propaganda, noting that “the symbols of today enable the reality of tomorrow.” (32)

READ ALSO:  When Will Business Start Standing Up for Itself?

“In the Soviet Union under the rule of Joseph Stalin,” Snyder writes, “prosperous farmers were portrayed on propaganda posters as pigs — a dehumanization that in a rural setting clearly suggests slaughter. This was in the early 1930s, as the Soviet state tried to master the countryside and extract capital for crash industrialization. The peasants who had more land or livestock than others were the first to lose what they had. A neighbor portrayed as a pig is someone whose land you can take.” (33) With that precedent set, later came the collectivization of everyone’s land and the starvation deaths of millions of peasants.

Snyder gives special emphasis to the need for professionals, notably lawyers, judges, doctors, businesspeople, to remain true to their ethical norms (“Remember Professional Ethics”). He observes that it is hard to “subvert a rule-of-law state without lawyers, or to hold show trials without judges.” (38) A rising authoritarian regime needs obedient, seemingly morally upright servants who passively conform to the changing political climate.

The book’s second far-reaching point is that tyrannies war against facts and truth. Snyder perceptively warns: “To abandon facts is to abandon freedom,” (65) adding, “You submit to tyranny when you renounce the difference between what you want to hear and what is actually the case.” (66) In one eye-opening section, Snyder outlines how tyrannical regimes of the past have subverted the very idea of truth.

Initially that process involves the “open hostility to verifiable reality, which takes the form of presenting invention and lies as if they were facts.” (66) Later comes the numbing repetition of fictions, the open embrace of contradictions, and the calls for faith in a god-like leader. Here again Snyder calls on individuals to take responsibility: to be more cautious in their use of language (avoid fashionable terms; identify things in your own words), to actively look for facts, to become genuinely informed (read more books, spend less time online and watching cable news), and to uphold the idea of truth.

The third broad point that emerges from On Tyranny is the exploitation of crises (imagined, real, and exaggerated) to expand government power. Authoritarians have used sudden disasters, or merely exceptional situations, to suspend free speech and the rule of law. Snyder illustrates the pattern with the example of the 1933 fire at the Reichstag, which housed the German parliament. That incident helped pave the way for Hitler to rule by decree and put Germany in a “state of emergency for the next twelve years, until the end of the Second World War.” (105) During the last few decades that same pattern, Snyder argues, can be seen playing out in Vladimir Putin’s authoritarian rule in Russia. For tyrants, Snyder warns chillingly, “the lesson of the Reichstag fire is that one moment of shock enables an eternity of submission.” (110)

These three broad points — about moral sanction; facts and truth; the use of crises — emerge from various lessons, and they’re genuinely illuminating. But alongside them you’ll run into other lessons that are remarkably narrower or arguably wrong, and some peculiar gaps.

Snyder writes with passion about how facts and truth are pivotal to a free society, but then we find the following invocation presented as apparently comparable in importance: “Make Eye Contact and Small Talk” (stay connected to the humanity of fellow citizens). And another lesson based on the experience of the Solidarity labor movement in communist Poland — “Practice Corporeal Politics” (protest, march in the streets) — is unconvincing as a means of opposing a rising tyranny.

There is, moreover, a significant gap in Snyder’s twenty lessons. Snyder notes in a few places how tyrannical regimes scapegoat and vilify “outsiders.” The point surfaces here and there, but it’s given no special emphasis. What makes this odd is that one common denominator of the twentieth century’s dictatorships was their collectivism. Collectivism is the doctrine of elevating the group — whether the nation, the race, the proletariat — above the individual, and treating the individual as a dispensable cell in a larger organism, which has supremacy. From such collectivism flows the rabid vilification and scapegoating of outsiders: foreigners, non-Aryans, bourgeoisie. And we are seeing precisely that phenomenon again today, notably in the hostility to the “1%,” in the growing prominence of white nationalists, within the immigration debate, and in some ideas for dealing with Islamic totalitarianism.

This gap is the book’s major limitation. The last century has more to teach us about the rise of tyranny than most people appreciate. But a full understanding of that period and of the lessons for today’s situation requires more than history. It requires at least two things: first, looking at the intellectual causes, chiefly the philosophic ideas, that give rise to and fuel tyrannies, and second, examining the counterpart issue of what fundamental ideas must be defended to uphold a free society. That, however, is not Snyder’s project; what the book does illuminate — aspects of twentieth century European tyrannies — is quite valuable. Readers seeking a fuller picture will need to pick up additional sources. (Snyder recommends a few novels and nonfiction works, mainly on the history, operation, and politics of dictatorships. To learn more about the intellectual factors underlying tyranny, I would offer two recommendations: an essay by my colleague Onkar Ghate on the cultural and philosophic significance of Trump’s rise to power; and, on the ideas that gave rise to Nazism, see Leonard Peikoff’s insightful analysis in The Cause of Hitler’s Germany.)

Even so, the issue of what ideas give rise to and fuel tyranny crops up indirectly, and Snyder’s approach to it underscores a shortcoming in the book. Snyder seems to take for granted that all or most readers will know what ideas to champion when they speak up. That’s far from obvious. Indeed, Snyder himself puts forward some moral and political views (for instance, the widely held idea of limiting free speech through campaign finance laws) that are at odds with freedom. The unfortunate effect is that you could come away from the book believing that the cause of defending freedom is something people widely understand and share. That is not true today. Nor was it true in the past, a fact we can come to see by reflecting on Europe’s history over the last century, the very thing Snyder is asking us to do.

Yet, Snyder’s book is well worth reading because, by looking at the tyrannies of Europe’s past, it alerts us to important features and mechanisms of dictatorship. And for anyone wishing to assume the responsibility of preserving their freedom, it is wise to follow a piece of advice from Snyder. In a nutshell: Step out of the bubble, saturated by social media and continually “breaking” news, that distorts thought, and seek to understand the lessons of the past, so that you can engage with the world as it actually is.

Read On Tyranny: Twenty Lessons from the Twentieth Century for historical perspective; for philosophic insights on the rise of Nazism, read The Cause of Hitler’s Germany by Leonard Peikoff.