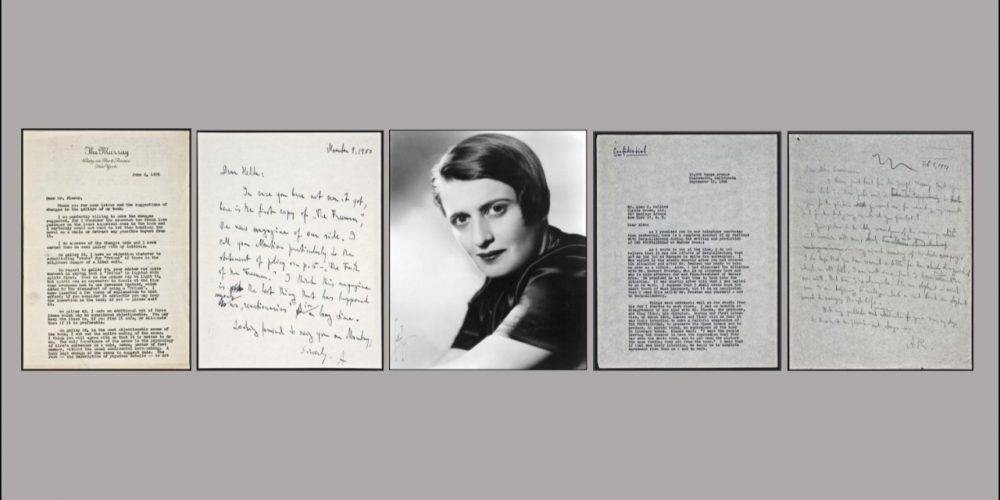 For anyone curious to learn what Ayn Rand was really like, one invaluable resource is her personal correspondence. Beginning with the publication of Letters of Ayn Rand in 1995, readers have had an opportunity to see how Rand pursued her values day to day. “These letters do not merely tell you about Ayn Rand’s life,” says her longtime student, philosopher Leonard Peikoff. “In effect, they let you watch her live it, as though you were an invisible presence who could follow her around and even read her mind.”

This summer, forty previously unpublished letters of Ayn Rand were posted on ARI’s website. The letters cover a forty-five-year span, the earliest written in 1935, the latest in 1980. Selected by Michael S. Berliner, editor of Letters of Ayn Rand, they are published in four groups on ARI Campus (for links, see the accordion feature at the end of this article).

Previous New Ideal articles provide detailed introductions to each group and feature intriguing quotations from the newly published letters. The first group deals with Rand’s work as a Hollywood screenwriter, with major focus on her efforts in writing the screenplay for the 1949 film of The Fountainhead (and a minor focus on her response to discovering a pirated film based on her 1936 novel We the Living). The second group focuses on business issues surrounding her novels We the Living, Anthem and The Fountainhead and her plays Night of January 16th and Ideal. The third group centers on Rand’s nonfiction writing and political activism (a political tract for Reader’s Digest, editing of work by free market activists, and participation in anti-Communist activities in the late 1940s). The final group includes personal correspondence with friends and colleagues.

READ ALSO:  Justice in a Benevolent Universe
In every letter, one sees events and people from Rand’s unique point of view. We not only see her mind at work, we experience her personality and glimpse her emotional life as well. Here are eight more nuggets, chosen from the trove of newly published letters, that suggest the breadth of her correspondence and illuminate important aspects of her life and career:

To her lawyer in New York City, shortly after Rand moved to California to write the screenplay for The Fountainhead under contract with Warner Bros.:

In the only two weeks I had off since I’m here, I went and bought a house. Or rather, an estate, 13½ acres, in Chatsworth, twenty miles from Hollywood. The house is ultra-modern, by Richard Neutra, all glass, steel and concrete. The house is a small palace, too wonderful to describe. We have ten acres of alfalfa, an orchard, chickens, rabbits, two ponds that go around the house, and a tennis court. Can you see me as a capitalist? And here I thought I was the poorest (financially) defender capitalism ever had. (Group 1: to Pincus Berner, September 24, 1944)

To her literary agent, who was seeking a producer for Rand’s play Ideal:

Please make it a matter of irrevocable policy in the future not to send any work of mine to any producer or publisher known as a Communist. Do not send IDEAL to any producer who has an established pink reputation, such as the following: Oscar Serlin, Shepherd Traube, Orson Welles, the Playwrights’ Company or any left-overs of the Group Theatre. . . . Please be as careful about this as you possibly can. You must surely realize that those people will never produce anything of mine — nor would I let them produce it. (Group 2: to Alan Collins, August 6, 1946)

To a free-market activist whose written work Rand was asked to edit:

On page 7, you mention as your aim: “Encouragement, including financial assistance, when necessary, to those scholars who are competent to produce such fundamental works as The Wealth of Nations, The Federalist Papers,” etc. This sentence sounds a bit naive. Such works as “The Wealth of Nations” or “The Federalist Papers” are achievements of genius, which is rare in any century, and they cannot be produced to order, just through financial assistance to scholars. (Group 3: to Leonard Read, July 17, 1946)

To a friend who had forwarded Rand a letter from a Broadway producer who volunteered to “be of assistance in having Miss Rand turn out a tremendous theater work”:

Gerald, darling, you surely know me well enough by now to know that I do not write with anybody’s assistance. When and if I decide that I want to write a new play, I will write it. I have never undertaken a piece of writing on somebody’s suggestion, advice or prodding. When I come to New York I would be glad to meet Miss Dalrymple, but only on condition that she give up any idea of moulding me like some writer from P M.1 (Group 2: to Gerald Loeb, July 31, 1947)

You may have read in the papers that Warner Bros. are starting now on the production of THE FOUNTAINHEAD. Nobody is set for the cast yet — except Gary Cooper. Do you remember our meeting with him? I am certainly delighted about this, since of all the big name stars, he is my choice for Roark. (Group 4: to Linda Lynneberg, February 21, 1948)

To her literary agent, in a long report about Rand’s discovery that Fountainhead producer Henry Blanke intended to release the film with cuts in Howard Roark’s courtroom speech that would change its meaning:

I told Blanke that if this cut were considered, if it remained in existence, I would have to take my name off the screenplay and break off all connection with the picture. I could not sign my name to the speech in that form. I could not let my political reputation be smeared by the kind of attack which that speech would provoke and deserve. (Group 1: to Alan Collins, September 18, 1948)

To a colleague regarding the wording of a proposed by-law banning Communists from membership in a private writers’ association:

I most emphatically do not believe that the philosophy set forth in the Constitution of the United States is a “Democratic philosophy,” and I do not hold a “Democratic” philosophy, if one uses that word correctly. Nowadays, the word “Democratic,” like the word “liberal,” has lost all specific, objective meaning. It has become a rubber word which every person stretches to mean whatever he wishes it to mean. But since we are an organization of writers, we, above all people, should use words in their exact meaning. Historically and philosophically, a democratic philosophy means a belief in unlimited majority rule (total rule by the majority, unlimited by any individual rights). This is not the philosophy on which the Constitution was based. The United States is a Republic, not a Democracy. (Group 3: to Edna Lonigan, February 12, 1949)

To the literary agent whose efforts secured the publication of The Fountainhead by Bobbs-Merrill in 1943, describing the progress of her next novel (which would be published in 1957 as Atlas Shrugged):

I hope that you won’t be let down by hearing that I am only at the end of Part I. As you know, my speed of writing always accelerates as I approach the climax of a story, so I don’t think that it will be too long now before I finish the whole book — but I won’t even make a guess at the date, in order not to disappoint you later. Part I, however, is about two-thirds of the whole book in length. I can’t tell you how much I wish I could show you what I have written since I saw you last. I know you would be pleased. Be patient with me for taking such a long time — it is really going to be worth the waiting. As for me, I am simply crazy about the story and I am very happy with it. (Group 4: Archibald Ogden, August 25, 1950)