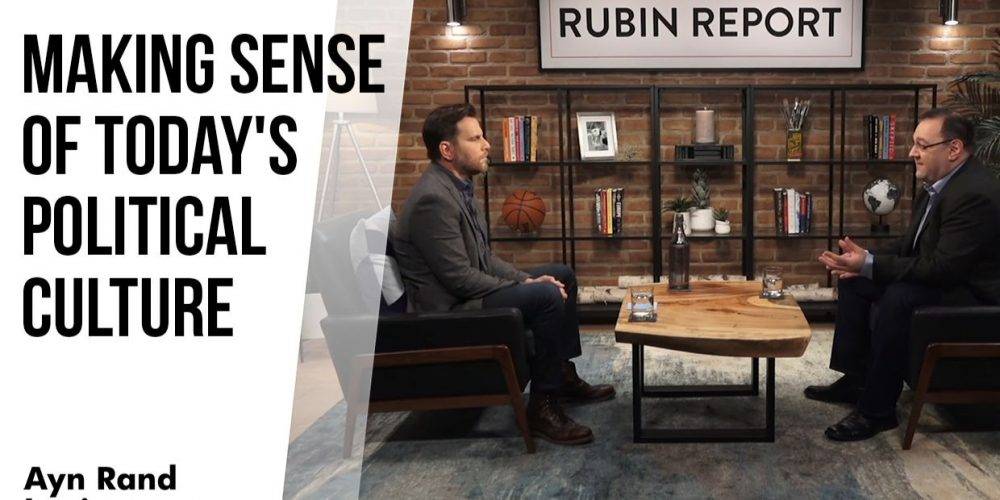 It’s hardly breaking news that our political culture has gotten ugly lately. But what is driving this trend? And is there a way to navigate it in a more positive way? In the latest in his series of interviews with Objectivist intellectuals, Dave Rubin, host of The Rubin Report, speaks with philosopher Gregory Salmieri, Anthem Foundation fellow and lecturer at Rutgers University, to get his perspective on these and other questions.

Salmieri agrees that our political culture has become particularly ugly over the past few years. The Left increasingly couches its rhetoric in terms of group privilege, of oppressor and oppressed, and argues, as Salmieri puts it, “not in terms of what rights people need to make their lives better, but who should be resented for our ills.” He also points to the ways in which the same kind of mentality is developing on the Right, citing the growing paranoia about immigration and the scapegoating of immigrants and the Chinese. This, says Salmieri, is just another form of resentment and grievance politics.

This country is all about the pursuit of happiness.  The reason you need the politics is to enable you to be free to pursue that happiness.
But Salmieri notes that as bad as the situation is, seen from a wider historical perspective, we are not living in any kind of apocalypse. It’s definitely worrying that the kind of mob mentality of “direct action,” of campus riots and sit-ins common during the 1960s and ’70s seems to be returning. But our situation now, he says, is not nearly as bad as it was then.

For those of us who want to think about and discuss the political situation maturely and honestly, asks Rubin, what is the path forward? Salmieri responds with three main pieces of advice:

(1) Distance yourself from the teams — from the “Right” and the “Left.”

Salmieri points out that there is more ideological diversity on either side than partisans of each are inclined to think. And although there is a set of ideas driving cultural change (for better or worse), those ideas are not the unique property of one of those sides; they are usually shared by both parties.

(2) Be more focused on the positive values you want to see achieved than on grievances or antipathy.

This country is all about the pursuit of happiness, says Salmieri. The reason you need the politics is to enable you to be free to pursue that happiness. So, when thinking about politics, keep your focus on the happiness you want to pursue and on the kind of political system you think is needed for that.

(3) Value the existing aspects of America that are good.

There is, says Salmieri, a lot that’s good about America. And, whatever its problems and shortcomings, it is an enormous achievement that must be valued. Reminding yourself of just how much is good about America can stimulate a real desire to change it for the better and recommit to it, rather than thinking, as some do, that we just need to burn it all down.

READ ALSO:  Vaccine False Alternatives: Bribes vs. Mandates
When thinking about politics, keep your focus on the happiness you want to pursue and on the kind of political system you think is needed for that. Click To TweetOther questions addressed in the interview include:

To hear the full discussion of these topics, watch the embedded video below. To follow this ongoing series of interviews — the result of a partnership between Rubin and the Ayn Rand Institute — see the episode list below.